And then I wrote… Continuing my “Year of Astronomy”, here is an entry from March, 2009 for the “Cosmic Diary” blog… it’s a trip down memory lane, from when I was putting on 100,000 air miles a year. I’d stopped that foolishness even before the pandemic hit.

A few paragraphs of a paper I submitted in late 2007 were the basis for a talk I gave last summer at the Asteroids, Comets, and Meteorites conference. It was about how the

The dark, fluffy C type asteroids dominate in the outer solar system; the denser red asteroids in the inner parts… a figure I never got around to publishing.

porosity of meteorites, and the porosity of the asteroids they come from, seem to show an interesting pattern… increasing, so that stuff appears to get fluffier and fluffier as you go further and further out in the asteroid belt and beyond.

The talk last summer got a nice, favorable response from the conference attendees and so I decided I should write it up for the conference proceedings. Deadline, December 1, 2008.

By January 2009 – only a month after the deadline – I finally had made a start at it. I put together a couple of really nice figures that told my tale rather well.

But at the same time, I was working on a book about Astronomy and the Vatican. This was at the suggestion of the Cardinal who’s our direct boss at the Vatican (and who is a big fan of our work). The difficulty with the book, the thing about it that made it eat up all my time, was simple enough: I was enjoying this way too much! It was finally done in mid January. On the train trip back to Rome from the opening ceremonies of the IYA in Paris, I did the final proofreading.

…the boss came back with a bunch of suggestions. Good suggestions, drat him! So the book was finally done (again) in early February. We put together another pdf version of the book, and I carried that with my on my computer as I left on February 14 for my winter trip to the US.

That trip included a visit to astronomer (and science fiction) friends in London; a talk at the Adventurer’s Club of Los Angeles; a visit to friends in San Francisco and a talk at the University of California, Merced; and finally arriving the end of the month at our observatory outpost in Tucson.

The Tucson stop was the reason for the trip to the US: we hold an annual seminar and meeting for the good people who support the Vatican Observatory Foundation, the donors who keep our telescope in Arizona going. And, for this meeting, the Cardinal was also visiting from Rome. Think of it as a visit of your Institute’s president, your country’s Minister of Science, and the Prime Minister, all rolled up into one. (Except that he is also the person who says Mass in the morning, as well.) A wonderful time, but as you can imagine, an exhausting one, as well. 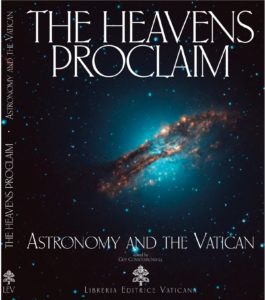 After the Cardinal’s departure, I had a hectic three days in Tucson seeing my doctor and dentist. I am a US citizen, Tucson is my official residence, and so I need to do all sorts of housekeeping duties while I am there.

Then it was off to Chicago to speak at the Adler Planetarium; Rochester, NY, to visit relatives; and Cornell University, where I have just completed three days as a resident guest scholar of Hans Bethe House (including a couple of presentations, a visit to friends at the Cornell Space Sciences department, and a visit from friends of Chesterton House.)

It is now early in the morning of March 12. I am about to leave for a flight to the UK, and a talk tomorrow night at the York Festival of Science and Engineering. My free time here at Cornell was taken up mostly with preparing that talk. And sending back to Rome the final, final, this time for real, final corrections (five pages worth!) for the Astronomy and the Vatican Book.

Oh, and I took a look at one of those figures for my paper and came across a discrepancy that I can’t understand, because after all I had done the original work a month ago, didn’t get around to documenting what I had done, and so now I’ve forgotten exactly where those numbers came from….

Peter Thomas, a fantastic planetary astronomer here at Cornell, told me of the time a professor he knew had a major publication in the journal Science… based on data that had been collected 30 years earlier. So I guess my work on asteroid densities has another 28 years to wait before I can top that record.

[So what ever happened? The paper still is waiting to be finished. The book, The Heavens Proclaim, (click to get pdfs for some of the chapters) came out in June and sold great, following a blurb about it on the Colbert Report. And I was off for a new round of talks and trips that fall…]

39  |  Other Worlds, Other Civilizations?