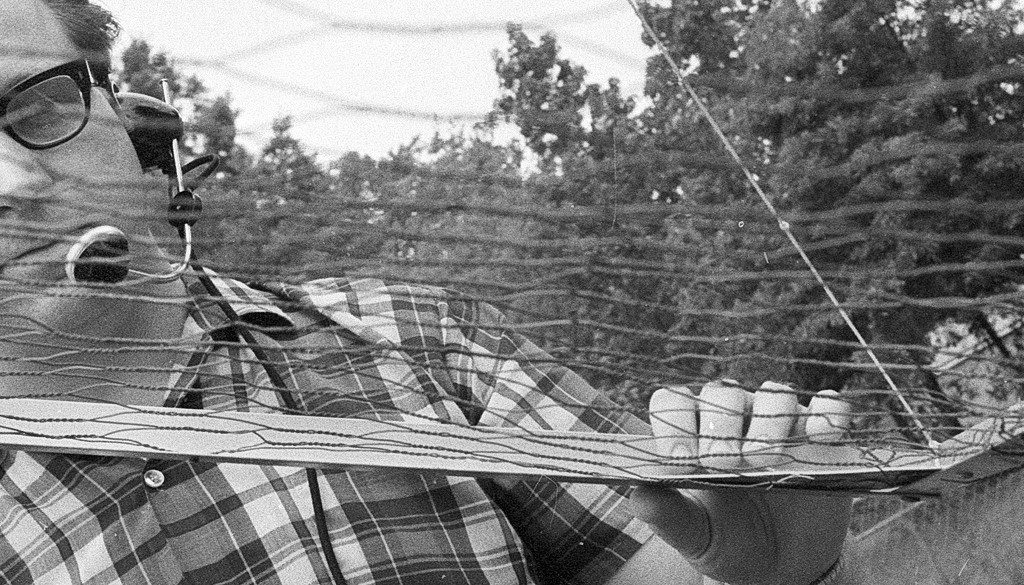 Have you ever built your own telescope?  Ever thought about trying to build one?  How about a radio telescope?

If you were reading Sacred Space Astronomy (The Catholic Astronomer) in the summer of 2019 you might recall a story involving a home-built radio telescope.  For the 50th anniversary of the Apollo 11 moon landing that summer, Sacred Space Astronomy told the story of Larry Baysinger and Glenn Rutherford.  They are the only people known to have directly observed, with their own home-built telescope, Apollo astronauts as they walked on the lunar surface!

Others besides Sacred Space had an interest in this story, and that interest has given us more information about that radio telescope.  Marnie McAllister of The Record, the newspaper of the Archdiocese of Louisville, wrote an article about Rutherford and Baysinger, focusing on Rutherford, who had served as editor of The Record at one time.  This story was picked up by other Catholic media, notably CruxNow (click here for the article).

And Laurel Deppen of the Louisville Courier-Journal wrote an article that focused mostly on Baysinger (click here for the article—you will have to subscribe to see it).  What is more, the on-line version of the article featured something very cool: four original black-and-white photos, taken by photographer Jay Thomas!

Deppen’s article may be available only to Courier-Journal subscribers, but the Thomas photos are available to all, in very high resolution.

These photos have such good resolution that you can see all sorts of details of the construction of Baysinger’s radio set-up.  Consider photo #4, below.  Rutherford was a young reporter for the Courier-Journal at the time, and he wrote a story that was carried in that paper.  The left-hand version is from that 1969 article, which I found only in late 20th-century microfiche at the University of Louisville’s library.  That lousy resolution is all I had ever seen, prior to Deppen’s story.  The right-hand version shows so much more; you can see Baysinger’s equipment.

Now take a look at photo #1.  In this case I already had something better than the microfiche: a better resolution scan, sent to me by Rutherford or Baysinger (I cannot recall exactly).  Still, the Deppen article version is so much better.

What is more, the Deppen article image reveals details about Baysinger’s equipment.  You can see some details of the headset that Baysinger is wearing…

Now look at this detail from photo #2.  You can really see the chicken wire, riveted metal, and cord that make up the reflector of the radio telescope.

Below you can see the antenna feed.  The reflector “focuses” (sort of—obviously the reflector is not built with a precision curve to it) radio waves down onto this, which picks up the signal.  You can see the cable that carries the signal off to the receiver.

You can also see that Baysinger seems to be using a 1960s-era headset, possibly wireless!  You can see that he built the support structure of the radio telescope from two-by-fours, and that he used pipe fittings for the “altitude” axis of the thing.

Thanks to these photos, we can learn a lot about how this very successful home-built radio telescope was constructed!  Are you thinking now about trying to build one?

In all likelihood Baysinger and Rutherford were not the only radio enthusiasts to do what they did.  But they are the only ones for which a record exists.  That record exists partly in the form of Rutherford’s newspaper story, and partly in the form of a recording that Baysinger made of what they heard.  He kept that recording, digitized it in due course, and shared it.  And, some years back, the BBC recorded an interview with Baysinger and Rutherford talking about their project.

Click here for a scan of Rutherford’s article (Louisville Courier-Journal, July 23, 1969, page B1).

Click here for Baysinger and Rutherford, talking for the BBC.