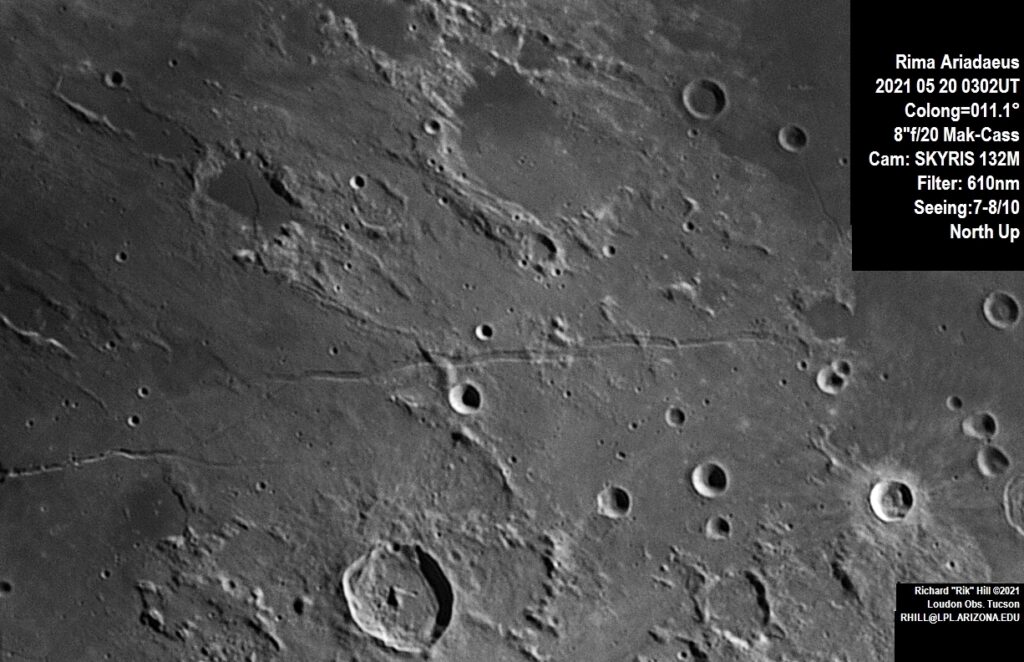 Like a canal between Mare Tranquillitatis and Mare Vaporum, Rima Ariadaeus can be seen here roughly 300km long horizontal graben-like trench. A graben is where blocks of rock drop down inside a spreading fault. In this case the blocks are 3-5 km wide. Note that the fault passes through whole mountains! At the left end of this image we can see a portion of Rima Hyginus. The crater just left of center is Silberschlag (14km dia.) and just above Rima Ariadaeus is the smaller crater Silberschlag A (7km). On the lower edge of this image is the much larger oval crater Agrippa (48km) with a nice ejecta blanket on the north side. To the right of Agrippa are two craters of the same diameter, Whewell (15km) and Cayley (15km) although to my eye Cayley looks slightly larger. They point to the beautiful Dionysius (19km) with an impressive ray system the only such crater with rays of any size in this field. Above Dionysius is a double crater Ariadaeus (12km) and Ariadaeus A (8km).

Above the rima are several large impressive formations. The large oval crater in the middle near the top edge is the Julius Caesar listed as 94km diameter (85km in some sources) that is anything but round! The darker material in the northern end of Julius Caesar probably indicates infill from material from the Tranquillitatis impact event. To the right is the very circular crater with a flat floor, Sosigenes (19km). Then left of Julius Caesar is a strange crater, almost rectangular, Boscovich with a nice system of rimae crossing it’s floor. It is listed as 48km “diameter” but I measured 30×48 on LROC Quick Map. Notice the out flow material on the southern end from a time when things were a lot hotter here.