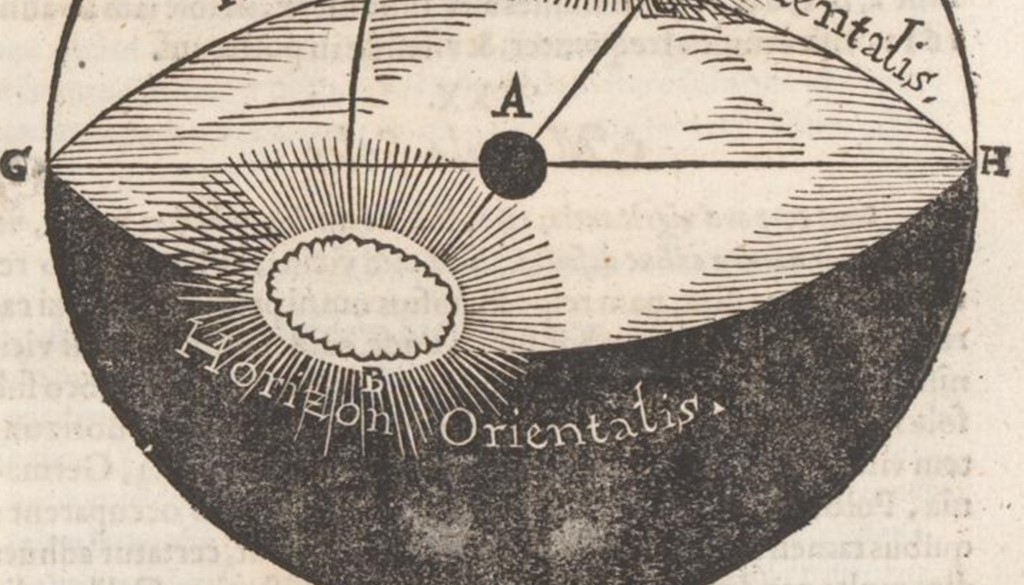 The Earth’s atmosphere refracts (bends) light.  Everyone sees this on summer days, when heated air rising up from hot surfaces like parking lots or roof tops makes distant objects seem to shimmer and waver.  Those who have spent time at the eyepieces of telescopes know the effect that the air has on telescopic views; for example, the refraction caused by turbulent air on nights of “poor seeing” can greatly reduce the amount of detail that is visible on the planets.  Refraction by the atmosphere also causes the sun and moon to have an oval appearance when rising and setting, and causes the stars to rise earlier and set later than they otherwise would.

All this has been long known.  Johann Georg Locher wrote a brief discussion of it (especially regarding the sun) for his 1614 book Disquisitiones Mathematicae.  He wrote the book with his teacher, Fr. Christoph Scheiner, S.J. (the same Scheiner who Galileo would quarrel with over sunspots).  Here is their discussion:

Locher wrote in Latin, of course.  The English is from a most excellent translation of Locher’s book—click here for it!  The Stellarium planetarium app shows the effect of refraction on the sun and the moon, and also on the rising and setting times of the stars.

To show the effect on the stars most simply, I set the app to show the sky as seen from a point on Earth’s equator, out on the ocean where the horizon is as flat as it can be.  Then a I chose a star located on the celestial equator: Mintaka, the upper-most star in the belt of Orion.  I watched for the moment of Mintaka’s rising.  Then I turned off the Earth’s atmosphere, and again watched for Mintaka’s rising.  See below.

The star rose 2 minutes, 22 seconds earlier thanks to the presence of the atmosphere.  The air bent the star’s light around the curvature of the Earth.

Now consider: as the atmosphere raises up Mintaka into your view, it must be raising up miles of ocean into your view as well—the ocean you see just below Mintaka.

How much ocean?  Well, let’s figure that out.

Geometrically speaking, you should only be able to see maybe 5 miles or 8 km out over the ocean.  The air brings many more miles of ocean up into your view.

In the past, the oceans were believed by many to stand higher than the land.  Mountain springs and desert oases were thought to be caused by water pressure from those “high seas” pushing water up through cracks in the Earth.  The high seas were even used as a scientific proof for the existence of God—the hand of God held back the sea, which would flow forward over the land otherwise.  And people said the seas looked higher than the land.  If you are interested in a full discussion of all this, click here and then click here.

I always thought the “high seas” were a pretty crazy idea, but it seems that maybe it made a certain sense.  Atmospheric refraction is lifting miles of ocean into view.  If people did not understand that refraction, then I suppose it was logical for them to conclude that the seas were “high”.  This effect is unlikely to be noticed on land, where even a low hill or line of trees is likely to block the distant horizon.

Were the high seas one of the “many errors” that Locher mentions, that the acquisition of knowledge will take away?  A modern error that comes to mind is the “Flat Earth” idea that has been nurtured by the internet.  Earlier this year NPR ran a story about YouTube and the abundance of misinformation and disinformation in YouTube videos.*  The story featured a woman whose father became consumed by conspiracy videos.  He apparently had some interest in astronomy at one time (she recalled them seeing the comet Hale-Bopp together), but then he got involved in the “Flat Earth” business and things went downhill from there.

Well, I have seen “Flat Earth” advocates declaring that, because you can see the Chicago skyscrapers from the other side of Lake Michigan, for example, that proves that the Earth is flat.  After all, were the Earth curved, the skyscrapers would not be visible beyond some span of miles.  But we have seen here that, thanks to atmospheric refraction, a person could expect to see the feet of the skyscrapers from 40 miles or 65 km away.  The upper portions could be seen from much farther away, no doubt. The acquisition of knowledge takes this error away.

By the way, how could you acquire this knowledge and figure all this out without Stellarium?  By watching the rate at which the stars wheel overhead at night, and by precisely measuring that rate as they approach the horizon—and of course by noting the shape of the rising and setting sun and moon.  Locher and Fr. Scheiner could have taught you all that you might need to know.

*Rachel Martin, Exploring YouTube And The Spread Of Disinformation, April 13, 2021, 5:06 AM, Morning Edition.