This column first ran in The Tablet in April 2017

We believe in things we cannot see – God, say, or Black Holes – because we observe their effects on the things that we can see. Still, there is a little bit of Doubting Thomas in all of us. It would certainly be nice to have a direct image of what a black hole actually looks like! 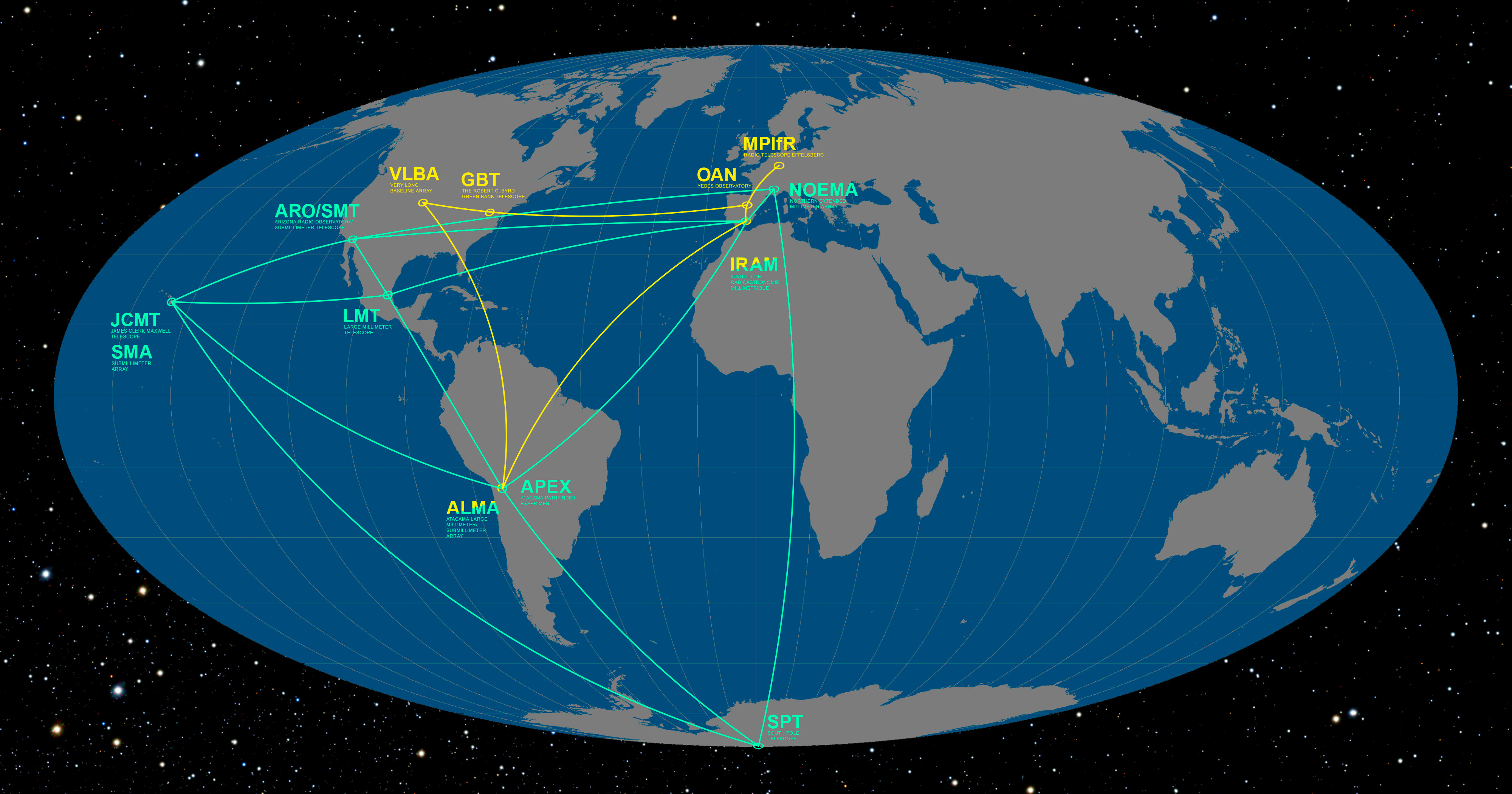 Diagram of the locations of the various telescopes who are networked to make the Event Horizon Telescope. Credit: ESO/O. Furtak – https://www.eso.org/public/images/ann17015a/, CC BY 4.0, https://commons.wikimedia.org/w/index.php?curid=57580702

The Event Horizon Telescope (EHT) is designed to do just that. It isn’t one instrument, but a collection of radio telescopes spread around world, observing the same object at the same time. Using a technique called Very Long Baseline Interferometry (VLBI), which compares the very tiny differences between different telescopes’ signals, a high resolution picture emerges. The farther apart the telescopes are, the better the image’s resolution; the EHT telescopes span the width of Earth itself.

After nearly 25 years assembling the team of telescopes and refining the technique, this month the EHT began its first concerted observations of the black hole at the center of our galaxy. We can’t see the black hole itself, of course; light can’t escape from its massive gravity. But a black hole’s size and shape can be measured by the shadow it casts against the radiation emitted when material falls into the hole. 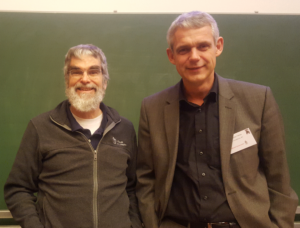 Brother Guy and Heino Falcke in December 2016 at Radoud University

Chair of the science council for the EHT is Heino Falke, an astronomer at Radboud University (where I spoke in December, 2016, at his invitation). I first met Heino in 1993 when we were students together at the Vatican Observatory’s Summer School (VOSS). This week I sent him an email to ask about the EHT.

“I first developed the idea in 1993, while I was at the VOSS,” he wrote me. His thesis advisor, Peter Biermann, was a VOSS lecturer; they eventually worked out how one could use VLBI to detect the shadow of a black hole. Subsequent visits to Arizona, including using the Sub Millimeter Telescope (next door to the Vatican’s telescope on Mt. Graham), ultimately led him to the EHT project.

The goal of the experiment is to test if the shadow’s size and shape matches what General Relativity predicts: between 45 (if it is rotating rapidly) and 52 (non-rotating) micro-arc-seconds (about the size a DVD on the Moon would look to us on Earth). The shape of the shadow should tell us how fast it is spinning.

A parallel project hopes to measure pulsars in the Galactic Center. “That would help us to get even better combined constraints of the nature of space-time, like the quadrupole moment, which in General Relativity is uniquely determined by mass and spin,” Heino explained. Black holes don’t show these higher order details; as Heino puts it, “black holes are the simplest objects in the universe.” So far, only one observable pulsar has been found, but he remains hopeful.

Want to know more? “Ah, ja, also Ray Jayawardhana wrote this nice article in The Atlantic recently about the EHT and my work,” Heino told me. “We were at the same VOSS, of course.”

Guy Consolmagno SJ is the director of the Vatican Observatory.

179  |  Across the Universe: The Ethics of Extraterrestrials