Astronomy pulls you out of your day to day world and makes you realize that the universe has bigger questions than “what’s for dinner?” and “why is my boss such a pain?” But what does an astronomer do to pull himself out of a day-to-day already filled with galaxies and black holes? 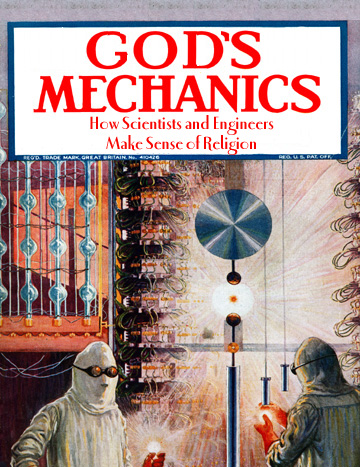 My 2005 Tertianship eventually led to a book, God’s Mechanics. This was the cover I wanted to use, adapted from a Popular Mechanics cover of 1923

In January, 2005, I began a Jesuit program called Tertianship, a period of study and prayer leading up to final vows where I’ve been challenged to move outside my own familiar modes of spirituality, to work outside my comfort zone. For me, that has meant working with people. For six weeks in May, 2005, I lived at Santa Clara University, talking religion to engineers and scientists in Silicon Valley.

The pattern of religious life for these “techies” is familiar: Students are consumed by questions about ultimate truth and the meaning of their own lives. Many 20-year-olds reject organized religion. By the time they’re forty they’re back in church, looking for community and a way to pass on a structure of right and wrong to their own kids. But the language they use to describe their religious journeys, and indeed the nature of those journeys, are strongly shaped by their technological culture.

Chatting with a programmer at Apple Computer, I described my surprise that so few of the 40-year-olds seemed to be concerned about religious truths in their churches. He nodded, and pointed out that they have already adopted their “operating system”; what we’re selling them now is “tech support.” Church as user’s group; it’s bad programming to constantly need new service packs.

Indeed, in the pragmatic, rules-oriented world of an engineer, religion itself is seen as one large book of rules for life. To some, the Bible is another computer manual, a guide to program yourself into Heaven. To others, religion is a “behavior modification system” that trains your kids not to lie or cheat or steal. To many, it is as full of useless knowledge as those unhelpful “help” programs that tell you everything you already knew, and nothing that you could actually use to fix your immediate problems. “The homilies at Mass are just so much white noise,” one engineer from a Silicon Valley start-up told me. “I use that time to meditate.”

More significantly, techies try to deduce from the rules they hear the deeper truths behind the rules. And then, like good tinkerers, they invent new rules for themselves, based on this home-brew theology, which they assume will do a better job in their own particular lives than following the received wisdom. 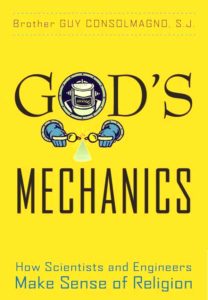 The actual cover to my 2008 book about techies

That’s how copier repairmen figure out how to fix their machines. As the ethnographer Julian Orr explained in his book Talking About Machines, a company like Xerox might issue a checklist of “if this fails, try that” procedures; but in the field the technicians just use these instructions to deduce a global schematic of how the machine actually behaves, so that they can fix problems never foreseen back at headquarters.

One of the joys of my time here has been talking to people like Dr. Orr. We did lunch last week, chatting over falafel and lime-flavoured fizzy water at a middle-eastern sandwich shop outside Stanford University. Retired from ethnography, he now raises sheep on a ranch near Half Moon Bay, and comes into Palo Alto occasionally to visit his acupuncturist. (Only in California…)

I met him, and many other helpful scholars, through the Center for Science, Technology, and Society at Santa Clara University. The question of how technology has changed our culture is a hot academic subject these days, fascinating to observe… from the outside.

The laws of physics are far easier to grasp than those of the human soul. And – unlike people – once a scientific question is solved, it stays solved. Usually.

The interviews described here formed the centerpiece of my book, God’s Mechanics, which was published in 2008.