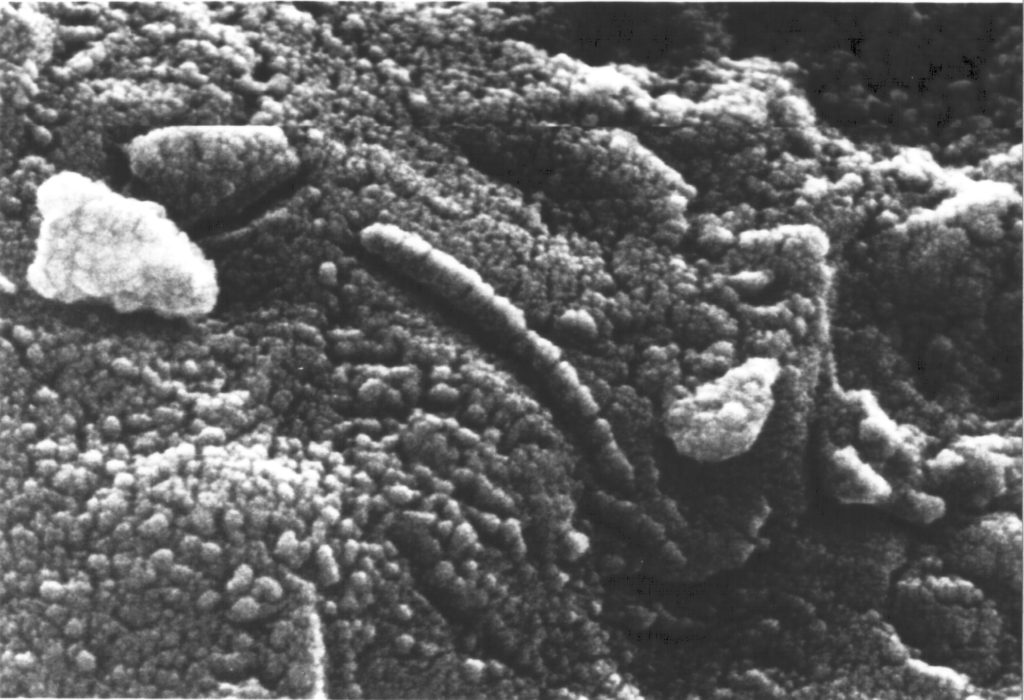 After twenty years, we still are arguing if these intriguing forms seen in the Martian meteorite ALH 84001 are actually fossils of life. Most scientists don’t believe they are, but…

We believe in things we don’t see — like electrons, or black holes — because they let us make sense of things we do see. But sometimes we don’t believe, even when we see. The question of what we believe, and why we believe in it, struck me particularly at the [2007] annual meeting of the Meteoritical Society.

A French mathematician has analyzed the dates meteorites have been seen to fall over the past 200 years and found clear trends, at the 90% confidence level: more meteorites than usual tend to fall every 3 years, every 10 years, and every 17 years. His analysis is standard, straightforward stuff; but I don’t believe it. Nor did anyone else in the audience. Two hundred years just doesn’t seem long enough to show such periodicities. And we’ve been burned before with theories that had only a 10% formal chance of being wrong. We know from experience that any random string of numbers will always appear to have “trends” that turn out to be ephemeral; just ask any broker using this system to predict the stock market.

Scientists from NASA’s Johnson Space Center in Houston reported, again, on that meteorite from Mars they first proposed [now nearly 25 years ago!] had evidence of life. No one has yet been able to explain why its magnetite crystals are so pure (like those made inside terrestrial bacteria), or why it and other Mars meteorites harbour trace organic materials that on Earth are usually associated with life. No one says that life on Mars is absolutely impossible; but no one else really believes that these materials in these meteorites were formed by bacteria, even in the absence of a convincing counter-hypothesis.

Why is that, I wonder? What does it take to convince a room full of scientists to change their minds? It’s more than better data, though such data are always needed (and usually lacking; a friend jokes that “conclusive proof is always just beyond the limit of our detectors”). It’s also a social phenomenon, and it says something about the way we humans allow ourselves to be convinced about anything.

We always have a threshold of doubt. Before the “life on Mars” meteorite was announced in 1996, a minority opinion still held that maybe those meteorites really weren’t from Mars. Once our skepticism was transferred to whether or not they had life, no one has questioned their Martian origin (for which, indeed, the evidence is overwhelming).

Another example: we’ve long known that some meteorites are “primitive” unmelted collections of well-packed dust, while others have clearly been melted and re-crystallized. So theorists pondered, what melted some of the primitive stuff into basalts? But in the last couple of years, new precise techniques for measuring the ages of these rocks seem to indicate the once-molten rocks actually melted millions of years before the so-called primitive ones were formed!

We’ve been waiting for the experimenters to confess some error in the lab; but finally this year the modelers of meteorite origin have finally admitted that the data might be true. We can explain why the oldest solar system material might have melted; but how did anything survive to be formed into smaller, never-melted bodies millions of years later? Any why did our own primitive ideas about meteorites survive unaltered until this year?

Fashions in belief are familiar to anyone in religious life. What’s “obvious” to one generation is dismissed by the next, while the point behind historical controversies just puzzles us. Only time, and patience, can let us recognize the truth. Collecting facts, whether it is scientific data or the historical events on which our religion is based, is the kind of mechanical action that a robot can do. Choosing how we make sense of those facts is an act of the human will.

Twelve years later, most of these questions are still open…