This column first ran in The Tablet in May 2017

The British fantasy writer Neil Gaiman tells the story of attending a gathering of great writers, scholars, and thinkers, and wondering if he really belonged in that group. Next to him, another attendee also named Neil voiced similar doubts. “I just look at all these people, and I think, what the heck am I doing here? They’ve made amazing things. I just went where I was sent.” To which Gaiman replied, “Yes. But you were the first man on the Moon. I think that counts for something.” 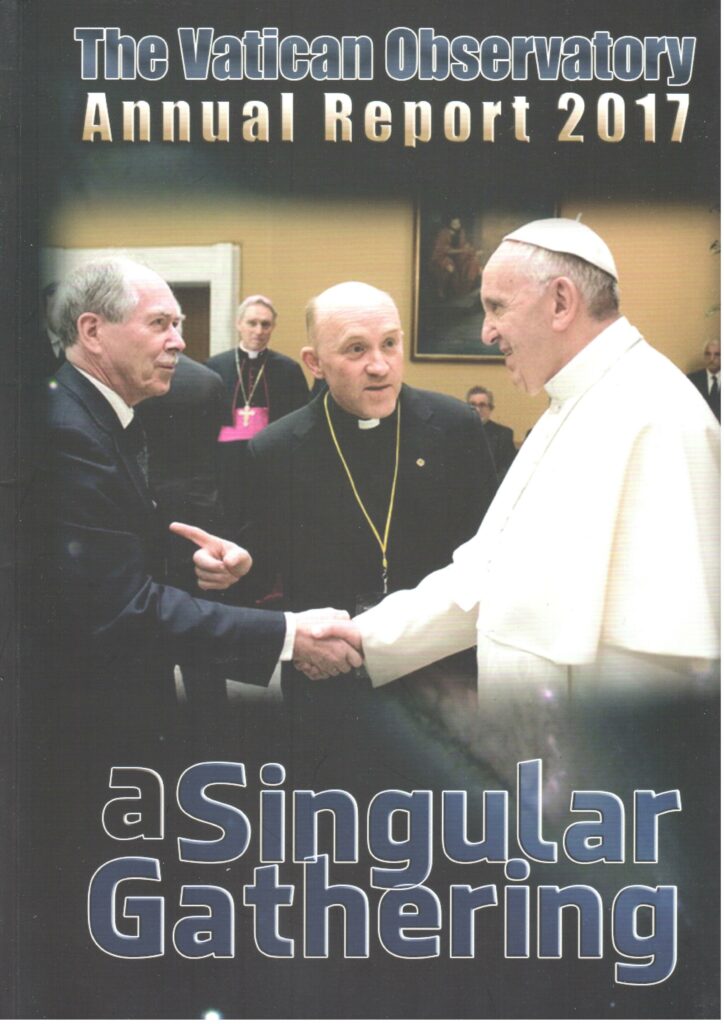 In that spirit, in May 2017 I presented to Pope Francis the attendees of our workshop on Black Holes, Gravitational Waves, and Space-time Singularities. The scientists included 35 of the brightest in the field, including a Nobel laureate. Two of them gave the Pope a copy of their work announcing the discovery of gravitational waves. (I gave the Pope a book written by children at my old elementary school.)

A major theme of the workshop was the exchange of information. Would information survive passage into a black hole, or would every kind of ordering be erased in that space-time singularity? The question has implications also for the singularity at the beginning of the Big Bang. What sort of theory would allow one to even answer that question? Will we ever have a workable theory of quantum gravity, to combine the insights of Einstein’s General Relativity (which works fine at astronomical scales) with the quantum physics that seems to operate at the tiniest scales?

What was wonderful to me was seeing how the setting of this workshop at the Vatican provided just the opposite of a black hole: rather than destroying information, the feeling of “neutral ground” here fed discussions that went on long after the formal sessions had ended… into the meals the attendees shared together, the walk through the Papal Gardens, even on the bus ride to the Papal Audience.

Conversation, the transmission of information, is the heart of science. Things can also get mis-transmitted, of course. Most of the news coverage (including in The Tablet) called our meeting a “faith and science” workshop even though the only faith expressed at the meeting was faith in, or against, the standard models of cosmology. (“I really hope there’s a multiverse,” one attendee confessed to me.)

And we got the usual spate of emails and tweets from those who have grand ideas about cosmology, if only the rest of the world would listen. What makes the 35 folks at our workshop worth listening to on this topic more than all the helpful enthusiasts who email us? The experts and prize winners have paid their dues: a lifetime of learning the real meaning of the words “singularity” and “space-time” in a way that journalists (or columnists like me) can only hint at; a lifetime of not only talking, but also listening. (One attendee was notorious for talking over those who disagreed with him; the rest of the group eventually just ignored him.)

That’s one difference between the real scientists and the wanna-be’s. The email writers are sure they are right; we know we aren’t, completely, and never will be. And that’s what gives us courage to believe we’re not imposters. Science is not the truth, but the search for truth.

Pope Francis understands that. “I am deeply appreciative of your work,” he told us, “and I encourage you to persevere in your search for truth. For we ought never to fear truth, nor become trapped in our own preconceived ideas, but welcome new scientific discoveries with an attitude of humility.”

[The title I chose for this column comes from something I once heard my grad school buddy Cliff Stoll say: “Data is not information, information is not knowledge, knowledge is not understanding, understanding is not wisdom.”]