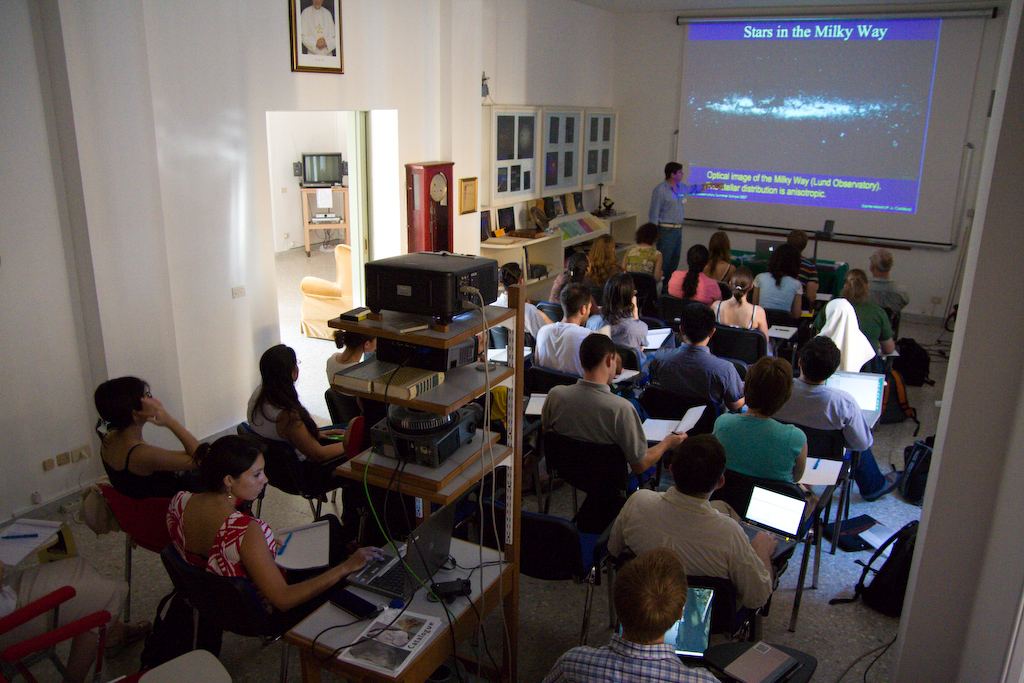 The classroom of the 2007 Vatican Observatory Summer School.

In early 2007, a team lead by Stéphane Udry of the Geneva Observatory announced the discovery around the red dwarf star Gliese 581 of a planet that is only eight times the mass of Earth and about 50 per cent bigger in radius. Orbiting close to its sun, its year is less than two weeks long; but because that star is so small and dim compared to ours, temperatures on the planet should range between zero and 40 degrees Celsius (about 30 to 100 Fahrenheit). Room temperature. Water should be liquid there, perhaps covering its surface with oceans ripe for life.

At least, I hope it’s covered in oceans. Swimming would be easier than walking on a planet where the gravity is three and a half times that of Earth. The star is only 20 light years away from us; robot spaceships in the next 100 years or so could reach such a place and send back data that, travelling at the speed of light, might reach us before our grants run out.

At the Vatican Observatory that summer, we were hosting a school of 26 university students and postgraduates in astronomy, gathered from 22 countries, to spend four weeks studying the search for extraterrestrial planets. It was our eleventh summer school since 1986. As they learn about the search for new worlds, I am reminded myself of the new world we find ourselves in since that first school 21 years ago.

Back then, we had nine planets in our solar system and none elsewhere; the first number has dropped to eight, as the second had grown to more than 230. [As of 2015 we had confirmed nearly two thousand exoplanets; by 2019. the count has grown to over 4000.] Back then, the school was staffed by Americans at an observatory run by Americans; today our observatory director is from Argentina, and this year’s school is directed by a professor from Chile, himself a student of that first school.

And of course, the 2007 students were barely born when that first school was held. We had fewer students from “developing” nations at this school, in part because nations that were “developing” 20 years ago are well developed today. Reflecting the trend in universities everywhere, the majority of our students are now women. And the majority have arrived with their own laptops.

Twenty years ago we taught that a fundamental point to be explained in any theory of planet formation was that rocky planets were found close to the sun, with gas giants further away. But most of the planets discovered to date are “hot Jupiters”, gas giants orbiting quite near their stars. Yes, they’re the easiest to find; but that they exist at all is a shock to our old theories. And we’re finding them at a rate of one out of every 15 stars we’ve looked at.

Does this mean that our old theories were completely wrong? If science keeps changing its mind, why do we bother teaching it? Is what we’re teaching these new sets of students just as likely to be in error? Why should they have faith in our reasoning?

Actually, our old theories were perfectly fine. We merely needed to add one more element to them – in this case, the ability of planets to “migrate” from their original orbits. (That process explains both the hot Jupiters around other stars, and how Neptune kept Pluto from growing into a planet.) Indeed, science works precisely because it’s not afraid to admit it was incomplete and to add new elements to its re- ceived wisdom.

By 2007 we had a new Pope as well. Welcoming these science students in a private audience during the first week of the school, he quoted to us, “Faith and reason are like two wings on which the human spirit rises to the contemplation of truth.” It’s from John Paul II’s Fides et Ratio; Pope Benedict, too, was not afraid to build something new on the wisdom of the past.

(Our next summer school will be held in June, 2020, with the topic of Centres of Galaxies. Applications are open now, and close in October; applicants must be students at the end of undergraduate or beginning graduate studies who show evidence that they intend to pursue a career in astronomy.)

32  |  Across the Universe: Truth, Beauty, and a Good Lawyer