This column first appeared in The Tablet in January, 2008

When I was a student, I once took one of those tests designed to tell you what career you should choose based on your personal likes and dislikes. (“Do you prefer raw or cooked carrots?”) Strange as it sounded at the time, they had a point. Scientists do tend to have a lot of common personality traits. Of course, other careers also feature self-reliance and a certain disregard for social niceties. I just knew I wanted a life where I wouldn’t have to wear a tie.

Oddly enough, I find the personality types attracted to science are not so different from those attracted to the Jesuits. Certainly when I was choosing science, the gender ratio and funding prospects in my field at that time promised me nothing but poverty and chastity.

But obedience, the third vow of a Jesuit, is not typical for a scientist. Certainly it was the hardest for me to get used to when, just a year shy of 40, I took my vows. Indeed, in some ways this vow cuts even deeper than marriage vows: I obey superiors whom I do not choose. And when they leave office the vow is transferred to the next superior as well, whoever it may be. Which makes me wonder… how will the election of Adolfo Nicolás as the new Jesuit Father General [which occurred in January of 2008] affect the way I do my science? 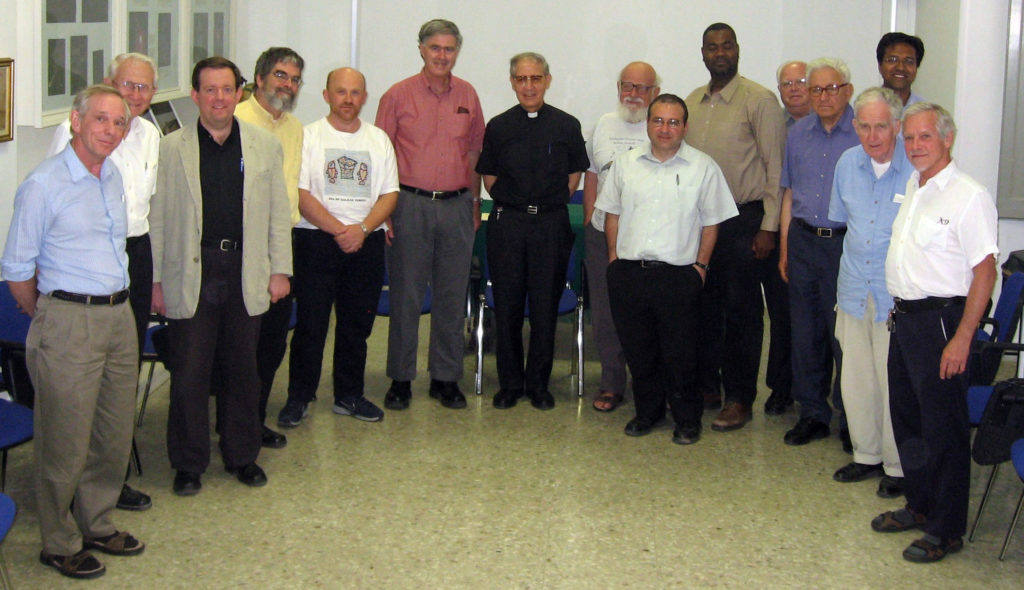 The summer after his election, Fr. Nicholas visited the Vatican Observatory. Note that none of us are wearing ties. (photo credit, Fr. Rich Boyle)

In practice, of course, usually the yoke is easy and the burden light. When I was appointed to the Vatican Observatory my only instructions were “do good science.” I’ve done science since then, and some of it has been good. What science I do is left to my own devices. And if my appointment was without any choice on my part (which it was) nonetheless nobody seems to give me much sympathy at being forced to live and work in a palace… or, if we move next year, in a remodeled convent among Italian gardens.

Before I was a Jesuit I worked as a researcher at MIT. My boss in those days, Sean Solomon, has also been in the news. He’s now the principle investigator on the Messenger space probe that just last week flew by planet Mercury, on a circuitous journey that will actually have it zoom past Mercury two more times before finally settling into an orbit around the planet in 2011. (Why such a route? Celestial mechanics. Don’t ask.) Sean was a ideal boss for me: he provided an office and a salary, and asked merely that by the end of the year I publish some papers acknowledging his NASA funding. In the three years I worked for him our only conversation occurred when, by accident, we happened to sit next to each other on a flight home from a conference.

Ideal boss, yes; but I realize now I was a pretty foolish employee, not to take advantage of all that he could have taught me. Just as my Jesuit obedience has given me an enviable life, so a little more paying attention to my boss back then could have given me a spot on the team now traveling to Mercury. But, like spacecraft, sometimes the celestial mechanics of our lives take us in eccentric paths before we reach the places we need to be.

Our relationships with the people in authority over us reflects how we respond to the greatest authority of all. God, too, has asked me to “do good science.” He’s also given me the freedom to choose just how I go about it. (And, I suspect, He looks on with amusement at some of my choices.) Of course, in this case, the emphasis is different. What good I do is left to my own devices. Some of it might be science.

Father General Nicolás has announced that he will retire, the end of 2016. A General Congregation has been scheduled for October to choose his replacement. I will be a voting member of that congregation, which for the first time is including Brothers as well as Priests.

And Sean Solomon’s Messenger Mission was a great success, finally impacting into Mercury on April 30, 2015.