This column first appeared in The Tablet in August 2004. It ran here at the Catholic Astronomer in August, 2015.

Scientists have a reputation of being nerds with no social skills, and yet like actors and athletes we spend most of our careers working in teams. It’s a rare scientific paper that has only one author.

This social aspect of science is especially clear at the annual meetings of scientific organizations. Obviously meetings are important for practical reasons. If you don’t tell anyone what you’ve done, you might as well not have done it. If you don’t know what others are doing, you can’t pitch in to help the field along. And if we didn’t have meeting deadlines to meet, we’d never get the work done!

But meetings are also attractive precisely because they are social events. The first week of August [2004] found me in a resort hotel on the beach of Rio de Janeiro with two hundred other meteorite specialists, listening to a hundred talks and joining in countless rump sessions over dinner, or beers, sharing with each other our excitement about topics at the limits of our imagination…

Now-extinct radioactive isotopes, made billions of years ago in supernovae, have left traces that let us pinpoint the age of the solar system to within a few hundred thousand years.

Asteroids hit South America, perhaps as recently as a mere few thousand years ago with more destructive power than the combined energy of all the nuclear bombs ever made, but their craters are now barely visible under the lush vegetation. 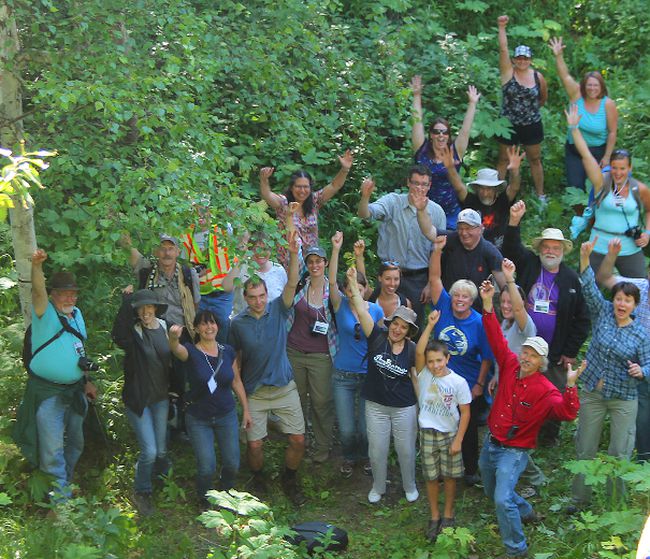 A group from a more recent MetSoc meeting, this one in Canada in 2013

You can trace a social history of the our science in the accents of these conversations. A great many of the biggest names in the field speak with accents from the British Isles, but virtually all of them over 50 have spent their careers in the United States. Fortunately the next generation, after working abroad, have found jobs closer to home; and indeed the accents of younger scientists whose name tags say “Germany” or “France” (or even “Vatican”) are often distinctly North American. The youngest participants have an even wilder variety of accents: Czech and Japanese and, at this meeting, Brazilian.

Along with this mixture of accents, there’s come a blending of the old national stereotypes about the way that science is done. It’s not only Germans who are ultra-precise; and some American teams can match the Japanese when it comes to group-think. Likewise, it’s no longer just the British who champion eccentric theories, so delightfully prevalent in my field.

For instance, nobody understands those little droplets of once-molten rock found only in meteorites, called chondrules; with no consensus, every theory for how they were made looks odd. 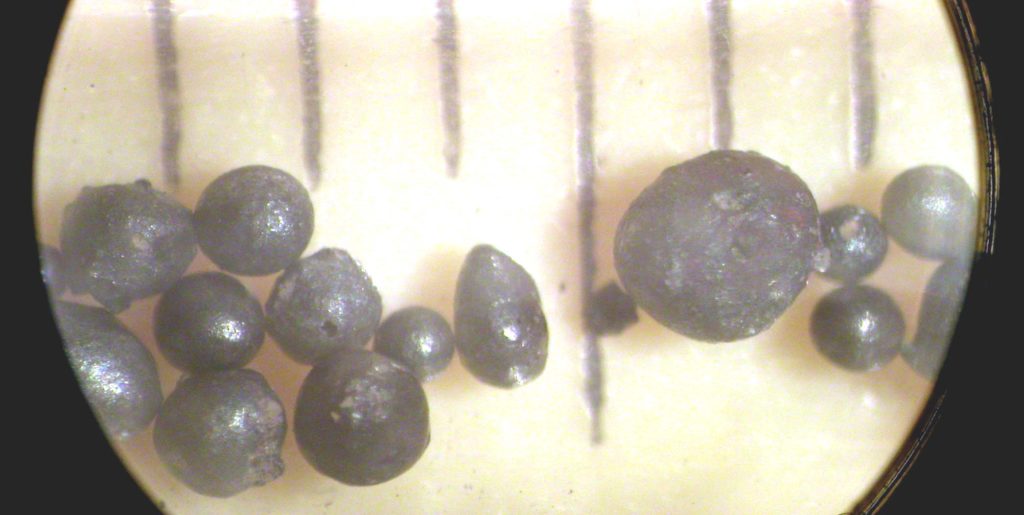 Chondrules from the Vatican meteorite collection

“They condensed like raindrops in a high pressure gas cloud that formed the planets!”

“They were droplets splashed out when two molten asteroids collided!” “

They were balls of dust flash-melted by powerful x-rays emitted by the young Sun!”

There’s a danger in proposing these odd theories. In a business where your reputation is your biggest asset, no one wants to be thought a crank. But the social dynamics in our field allow us the occasional crackpot idea, so long as we’ve paid our dues to the community by also doing the solid, unexciting work of data taking and sample curation that keeps the field going.

We need both. We need the plodding grind who spends a lifetime adding a decimal place of precision to the measurement of oxygen isotopes, and the dreamer who can spin a theory of swirling gases and exploding stars to explain the slightest anomaly in those data. The dreamers’ outrageous ideas often inspire the grinds to take the data that may prove the dream was baseless, but in the process open up unexpected puzzles and dazzling possibilities.

In other words, the scientific community is no different from any other collection of human beings. Movies and sports teams too need both stars and supporting players, even as sometimes the star of one show is the bit-player of the next. The variety refreshes.

Churches are no different. Churches need saints; oddly enough, they also need sinners. (Jesus certainly spent most of his time recruiting among them.) Though we may be shamed by our sins, we should never be ashamed to be sinners; the more unworthy we are of God’s love, the more proud we can be to have received it. In the same way, when we dare propose the occasional crazy idea, we also learn to appreciate the esteem with which our colleagues hold us in spite of our outrageousness.

The joy of this field is its mixing of careful data and unfettered dreaming. And in Rio, I had the time of my life… so much so that, I admit, I never did get to the beach. Scientists may be a social people, but I never denied I was a nerd.

Update 2018: I just returned from the Meteoritical Society’s annual meeting, which this year was held in Moscow. Many of the same questions are still being discussed!