This column first ran in The Tablet in March 2012 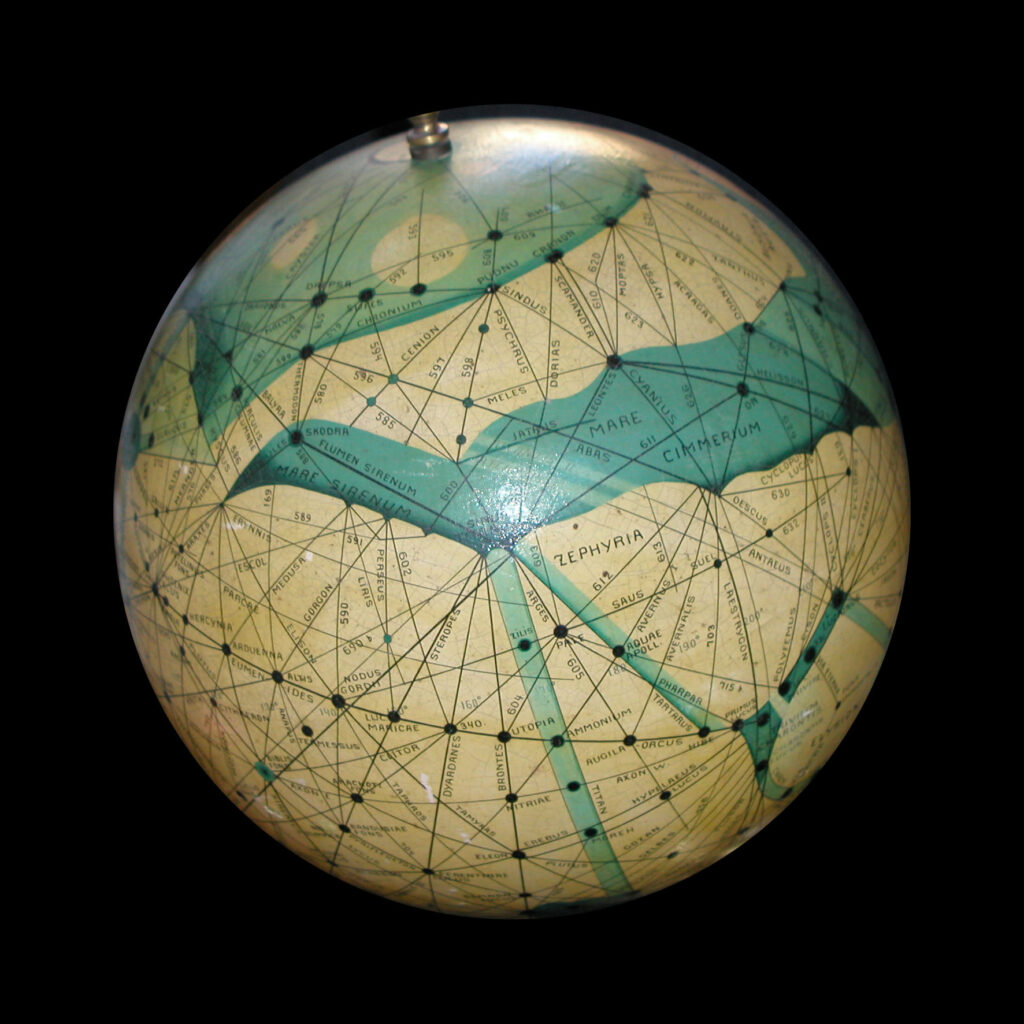 This hand-painted globe of Mars by Ingmar Bruhn in 1915 was based on observations confirmed by several good astronomers that Mars had canals. It doesn’t.

Rumors circulated [in March, 2012] that the “faster than light” neutrinos supposedly discovered by scientists at CERN the previous fall might be explained if the fiber optic cables connecting their equipment were not fastened tightly enough. Perhaps, rather than shaking the foundations of physics, the reported results were just common human error.

Certainly it wouldn’t be the first time that scientists have had to take back their discoveries. I remember learning about the “potassium flare stars,” discovered by a pair of astronomers in the mid 1960s. Observing the colors of a particular type of star, they found one occasion when suddenly a strong emission of light was recorded with precisely the wavelengths associated with the element potassium. Two years later, these astronomers saw a similar emission in a second star; a year after that, a third such flare was recorded. No reasonable physical explanation could be found to explain why these stars suddenly flared up with hot potassium… until another astronomer noted exactly the same emission on his plates, whenever he struck a match in the darkened telescope dome to light his pipe.

Other cautionary tales tell a different story, however. In the mid 1920s, Clinton Davisson was working at Bell Labs, trying to measure the structure of crystals by bouncing electrons off them. After years of perfecting a sensitive detector for these experiments, he still kept finding an irregular pattern in the rebounding electrons that none of his tweaks could remove. Frustrated, he nonetheless (fortunately) published his data, and then left for England with his wife for a second honeymoon. While in Oxford, he talked his wife into letting him attend a lecture by the German theorist Max Born. There he saw his “irregular pattern” being cited as the first evidence of the wave nature of electrons! What he had assumed was an intractable error in his laboratory setup, turned out to earn him a share of the Nobel Prize.

To my mind, the biggest blunders in science come not from publishing too soon or too late, but from not thinking to ask the right questions in the first place. Astronomers in the 19th century knew the sizes and the masses of the moons of Jupiter, but none of them bothered to use those numbers to calculate their density, and so no one noticed that they were likely made of low density ice. Their failure was one of imagination.

Meanwhile…  we already knew that the faster than light neutrinos were not a breakthrough but a blunder; a different CERN experiment announced that their neutrinos traveled merely at light speed, and Fermilab in Chicago found the same with their neutrino speeds, too.

Having more than one set of eyes can help us decide if we’re actually looking at the real thing. That’s why we do science as a community; that’s why we belong to religions rather than trying to “find Jesus on our own.” But even that is still not proof. A hundred years ago, both Giovanni Schiaparelli and Percival Lowell were convinced that they saw canals on Mars; we now realize that what they were both seeing was a common optical illusion.

Science is done by human beings. All these experiments are subject to our typical human foibles.

A friend of mine, Todd Johnson, is an engineer at Fermilab; he takes turns with other engineers as scheduling officer for the accelerator. A few days into his monthly term, the head of the neutrino experiment apologized to him for mistakenly sending his latest scheduling request to the previous month’s officer. Todd’s comeback: “You’re trying to make a measurement to within 60 nanoseconds, and you don’t know what month it is?”

73  |  Across the Universe: Dramatic Science