First published in The Tablet in February, 2006

Long rows of weedy plastic motel rooms spring up in the hard barren sands of the desert surrounding Tucson, their walls scoured by the creosote-scented winds and stripped of color by the relentless sun. In winter the surrounding asphalt seas shine with fleets of cars fleeing the cold of the north. The invasion reaches its peak in the first two weeks of February. That’s when the downtown Tucson convention centre, the main ballrooms of the larger hotels, and every motel within miles (plus more discreet, upscale shows in outlying resort regions) are filled with tens of thousands of rock hounds and gem dealers attending the annual Tucson Gem and Mineral Show: the largest in the world.

Tents in parking lots arch over tables covered with fossils from Morocco and rich ores from Argentina. Within the motels themselves, each room becomes a little shop. Walking down the hallways – or, more commonly in Tucson, past rooms that open directly to the parking lots or outdoor pools – all the doors are open, marked by little signs identifying the dealers’ names and origins. Look inside, and on every free surface you see bowls of precious gems or display cases of (sometimes questionable) antiquities. Squatting on the motel beds among the remains of breakfast are the proprietors, chatting importantly with other dealers while keeping a careful eye on their wares. 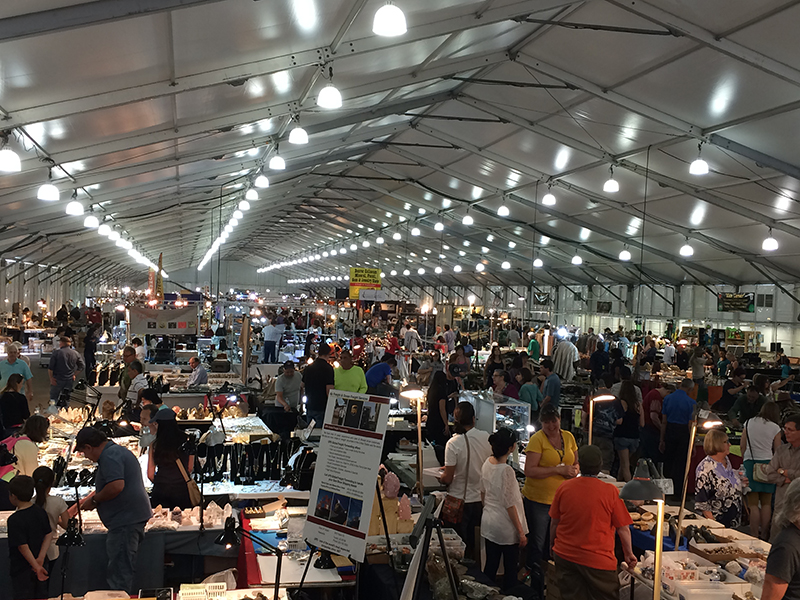 This image from the Tucson Gem Shows site is just one of dozens of sites with gems, minerals, and meteorites on display during the annual show.

Walking among the waves of grainy amber, I keep wondering what attracts all these people. I have never understood the joy in jewelry; even rubies look like just a pile of rocks, especially when they are filling plastic bowls in this particularly unglamorous setting. But hidden among the gem and mineral sellers are a handful of dealers in the one sort of rocks that does interest me: meteorites. They’re selling space rocks bought from nomads in the Sahara – meteorites stand out atop the desert sands – or collected from recent falls in Europe or America.

I have come to this show with a credit card and an $11,000 line of credit from a colleague’s institution, their designated agent to help assemble a teaching collection of meteorites. The cost of these dirty black stones and misshapen lumps of iron can sometimes range up to hundreds of dollars per gram. 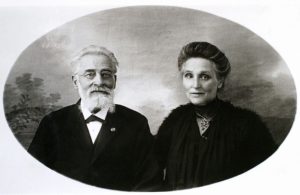 The Marquis de Mauroy collected meteorites; his widow donated them to the Vatican

Thanks to the competition from collectors, research institutions find it an expensive proposition to get samples for science. But thanks to the same collectors, these dealers find it worth their while to go hunting and gathering these samples. Without them, the samples would not be so expensive, yes: but without them, the samples wouldn’t be available at all. The Vatican’s collection itself was assembled a hundred years ago by a French nobleman, a private collector who would have loved this show.

I have my own native guide, a researcher from California who is herself also a collector. The dealers’ eyes light up when she enters the room. She knows from experience whose wares are trustworthy, what prices are fair. My own work as curator of the Vatican’s meteorite collection has trained me to recognize good samples and significant names. Together we trade meteorite-hunting stories with the dealers, and negotiate our purchases.

Within those unprepossessing meteorites are tiny clues to our understanding of how the solar system was formed and how it functions… clues that are as precious a treasure as the gems being traded in these equally unprepossessing motels rooms scattered about the Tucson desert. It will take years of work to put that data into its proper context; but likewise with luck each ruby in each plastic bowl will someday find its proper setting in a piece of jewelry.

I look again at the crowds thronging through the Gem Show and wonder anew at the Creator’s habit of hiding the most wonderful of things in the most unlikely places. As for the jewel in each one of us… when will it find its proper setting?