Originally published in The Tablet in March, 2008, and again here in 2015. Slightly edited.

A few years ago while I was showing friends around the Vatican Observatory in Castel Gandolfo, we bumped into a couple of visiting astronomers from Poland. After making the appropriate introductions, I mentioned that Jozef Zycinski also happened to be the archbishop of Lublin. My friends were suitably impressed; an astronomer/archbishop is something most people don’t see every day. But his companion in the hallway, Michael Heller; how could I describe him? As of 2008 I could also say, “he’s the winner of the 2008 Templeton Prize.” 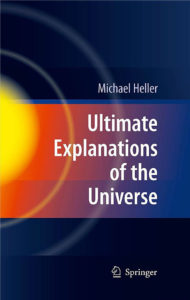 The stuff that Michael Heller writes…

I first met Michael Heller in the early 1990s. Chatting over breakfast in a Tucson diner, I innocently asked him what sort of astronomy he did. He explained that he was interested in finding a mathematical framework that could unite quantum theory with Einstein’s Theory of Relativity. Then he launched into the details of “a noncommutative algebra from which a differential geometry can be constructed…” Even though I was fresh from postgraduate courses in cosmology at the University of Chicago, I was lost. Those courses had been just enough to let me recognize that I was way out of my league.

It turns out that his theology and philosophy are at an equally high level, and equally difficult for the layperson to understand. I asked Bill Stoeger, the resident cosmologist and theologian among my fellow Jesuits at the Observatory, if he could give me a short summary of Heller’s “big ideas.” In a word: no. Indeed, a few years ago his fellow philosopher Stanislaw Wszolek wrote a paper on Heller’s work that ultimately summarized it by merely saying it rejects “the popular simplifications and divisions which appear abundantly in philosophical course-books and popular science books.” The short answer is that there is no short answer.

Instead of all that scholarship, I have a more familiar picture of Michael Heller. Stories at the Vatican Observatory describe how in the 1980’s he would escape to Castel Gandolfo, staying with us while he visited with his fellow Polish academic and close friend in whose summer home we lived. (Heller contributed significantly to Pope John Paul II’s documents supporting science in the Church.) When Michael came, our rector knew to stock up on bananas: rare delicacies in Poland during those last dark days of Communism.

And I remember my own visit to Cracow at Michael’s invitation in 2000, where he did an impromptu simultaneous translation into Polish of my talk. Half the audience got my jokes in English, the other half laughed at his Polish versions; he must have done them justice.

But can justice be done to a scholar like Michael Heller? Can the rest of us ever appreciate Heller’s contribution to the interface of science, mathematics, theology, and philosophy… especially when most of the popular attention nowadays gets focused on those whose expertise in one field is paired with an embarrassing naïvety in all the others? Indeed, his enormous talents are at such a high level, can they ever really connect to the rest of us?

It’s an issue that haunts every academic working in a rarefied field.

At the end of the day our life’s work is nothing but a pile of equations and words, mere wind, whose ultimate value (if any) we may never live to see. And, like St. Aquinas, we can recognize that a sudden insight into the face of God can make all our work look like straw best suited for the fire. Yet, like St. Aquinas, our poor writings can change the course of human thought, even to inspiring some future Michael Heller.

In the meanwhile, we find our encouragement in the joy of the work itself, which reflects the joy of the Creator… supplemented, of course, by the affirmation of the occasional million dollar prize.