Dark and dreary, January is a time to take off to new and exotic climes; or at least, to daydream about such trips. My own January voyage was a visit to my old hometown, snow-dusted Detroit, to attend a science fiction convention. But a panel discussion at that meeting, “Travel Destinations of the Solar System,” challenged us to imagine really exotic localities. Where among the planets would we love to go? And what it would be like to be standing there, in person? 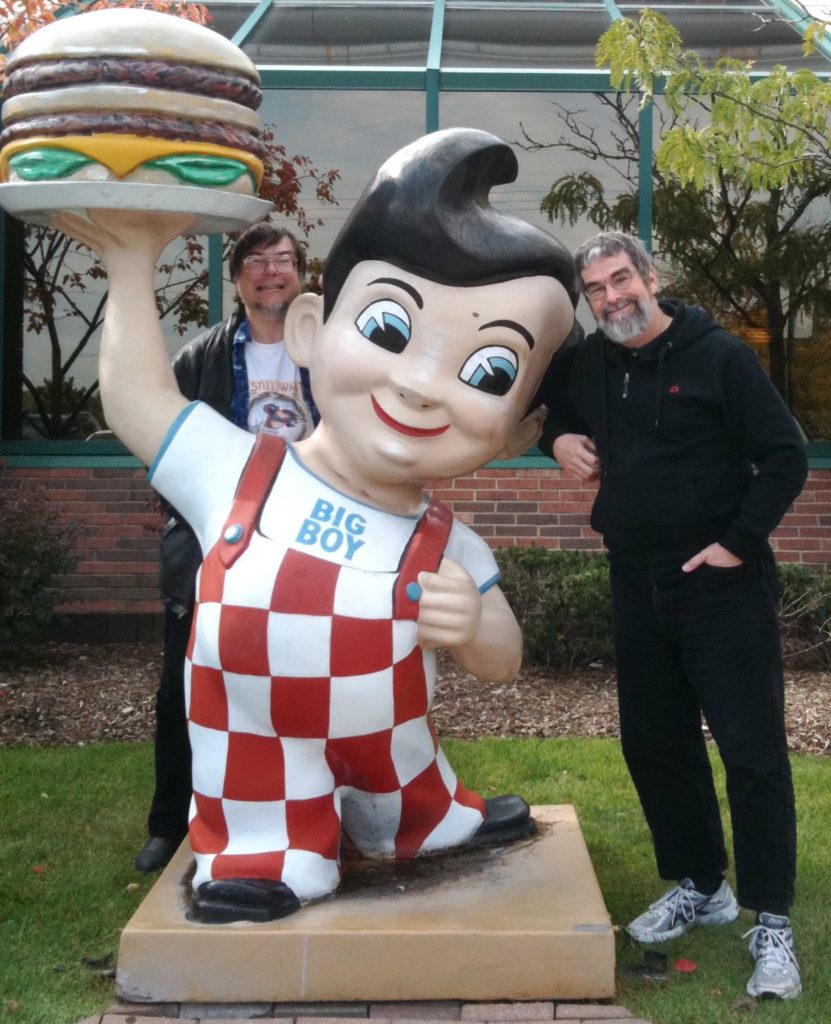 I love running this picture. Bill taught me, “Never pass up the chance to be photographed with a giant fiberglass statue!”  In fact, it was taken at an SF convention outside Detroit… but a later one than the one I talk about here.

Panelist Bill Higgins, a radiation physicist at Fermi Lab in Chicago [and occasional blogger here at The Catholic Astronomer!], regularly presents spaceflight results as a NASA “Solar System Ambassador” at events like this. He described how Pluto and its moon Charon orbit each other while locked in a spin state that keeps each body always facing the other. “What if we could stretch a “beanstalk” across the 17,000 km gap between them?” he asked. “We could run a cable car, and watch the solar system tumbling below us.”

Another participant, Karl Schroeder, is a science fiction writer raised in a Mennonite community in southern Manitoba. He suggested visiting a colony of floating cities in the clouds of Venus. Though the surface of Venus is immensely hot and dense, he pointed out that the conditions in its upper clouds are actually not much different than Earth; and a balloon of Earth-atmosphere, nitrogen and oxygen, could float happily in Venus’ carbon-dioxide air.

I talked about the “centaur with a coma” we’d found last year: a ball of tenuous gas, like a comet coma but as big as Jupiter, traveling alongside the centaur Echeclus, a hundred-kilometer ball of ice in a comet-like orbit out beyond Saturn. We think now that the ball of gas comes from a comet that split off Echeclus during its last pass by the Sun, now traveling on an independent orbit alongside its parent. Imagine what it would look like to anyone (wearing a space suit, of course, with a good heater) actually standing on Echeclus: that ball of gas, just a faint smudge in our telescope image, would fill a third of the sky overhead!

And we went further… in our minds we explored the caverns inside an asteroid; we hiked the rugged terrain of Miranda, the puzzling moon of Uranus; and we watched rainbows play along the hundred-kilometer high fountains of water spurting from the south pole of Saturn’s moon Enceladus.

Astronomy provides us the bare facts of the solar system: the sizes and locations of bodies, their compositions, the rate they spin. Science fiction turns those facts into places where we can have adventures. It’s an game that I learned reading Isaac Asimov, but one that has served me in good stead as a scientist: daydreaming about the convecting mantle of an icy moon, I’d take note of each imaginary detail – rocks falling through the molten slurry, crystals growing at the roof of the world – and turn it into another equation in a computer program to kept track of the energy budget of that moon.

And it’s a style of prayer that St. Ignatius features prominently in his Spiritual Exercises. Using a series of carefully chosen settings, he has us insert ourselves into the Gospel stories, picturing what it would have been like to be present when Jesus cured the blind man or calmed the Sea of Galilee. By imagining these events as vividly as we can, we bring alive a history that is not imaginary at all, but real, just as our planetary dreaming makes tangible this solar system.

We call it science fiction; but that comet beyond Saturn, the fountains of Enceladus, the dancing moons of Pluto are all as real as the man who walked the shores of Galilee two thousand years ago.

24  |  Across the Universe: Stardust messages

27  |  Across the Universe: One Fix Leads to Another