This column first ran in The Tablet in August 2017. Hard to believe it’s been a year since the solar eclipse…

August 21, 2017, marked the first total solar eclipse visible in the continental US in a generation (since 1979). Everyone in America caught eclipse fever. 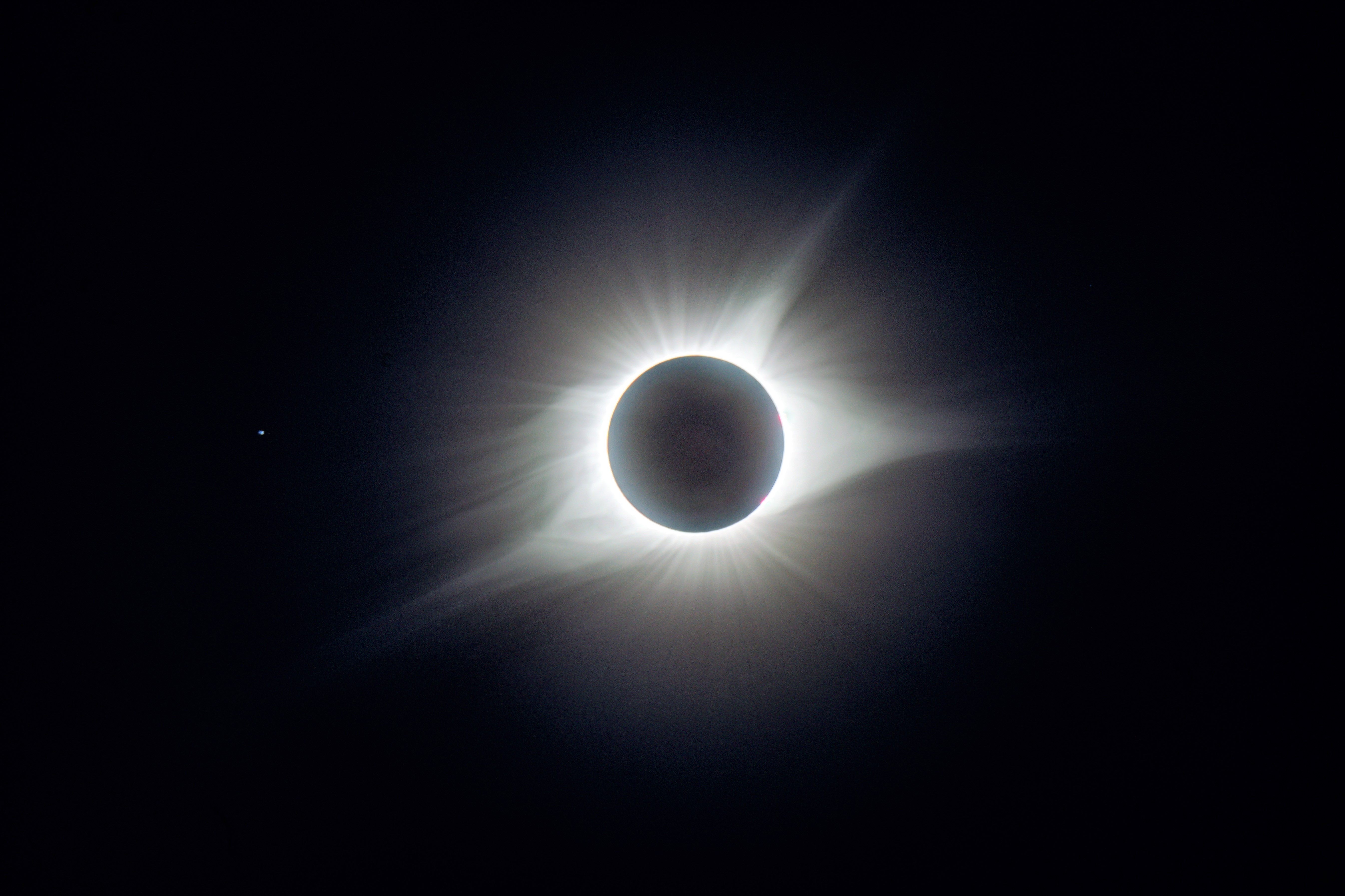 Remember the eclipse? It’s been a year… Claudio Costa, who works the Observatory in Castel Gandolfo, made this montage of various exposures that he took from Wyoming (not Montana as I said at first!)…

“A total eclipse is a spectacular event,” or so I was told. I’d never seen one myself. The last time I tried to observe an eclipse, the air turned so cold that a rain cloud formed overhead during totality. But even then I recall that the Moon’s shadow spooked the local birds into thinking it was nightfall; and I remember my surroundings looking ominously strange.

And so I accepted an invitation from Saints Peter and Paul’s Catholic Church in Hopkinsville, Kentucky, where the totality had its longest duration – two minutes, forty one seconds. A town of 30,000 souls, the residents there prepared for another 100,000 astro-tourists as if they were expecting a natural disaster. Leading up to eclipse day, bottled water was bought up, and lines formed at the local gas stations. Some farmers opened up their fields for campers… at fees ranging from free to $100 a day. Others surrounded themselves with barbed wire to keep the amateur astronomers off their crops. (Soybeans and tobacco.)

To a city boy like me, Hopkinsville felt odd even without the light of the eclipse. August in rural Kentucky is hot and humid. Breakfast includes something called grits. They say “eclipse” with three syllables –“ee-clay-ups”.  But everyone was excited. “We’re getting special glasses at school on Friday!” enthused the teenager serving me burgers at the local fast food joint.

Friday before the event, I spoke at St. Peter and Paul’s grade school. Saturday I had interviews the local newspapers (and a reporter from Time Magazine). Sunday evening we had a press conference with TV stations as far away as Detroit, before my talk to a packed church.

In my talk I waxed poetic; or so I thought. “A eclipse reminds us of the immense beauty in the universe that occurs outside of our own petty set of concerns… ” I told them, you don’t need an astronomy degree (or a lecture from me) for an eclipse to pull you into the majesty of a greater universe. You don’t even have to have clear skies to see the odd colors, feel the coolness, hear the silence, enjoy being part of the whole experience. It’s available for everyone, regardless of regional accent or breakfast choices.

But all my words were just so much hot, humid air compared to the event itself.

Monday around noon, I joined a small group gathered at local parishioner’s farm, close to the point of maximum totality. For an hour the air got cooler and a little dimmer. Then, to the west, the fields started darkening like a storm approaching. Suddenly, the sky turned a deep twilight hue. The whole horizon glowed sunset-red. Overhead bright stars and planets appeared. And, amazingly, the sun itself was replaced by a jet-black spot ringed with fire and a crown of light.

It was exactly like every eclipse photograph; and yet completely unexpected. Wide view pictures of the darkened countryside can’t capture the immediacy of the blotted sun. Close-up photos of the eclipsed sun lose the sense of a whole world, horizon to horizon, caught in a special aura. Using words to describe the experience of a total eclipse is like trying to capture God’s presence in  prayer with a powerpoint.

God created a universe so rational that we can predict to the second when and where a total eclipse will occur… and so beautiful that everyone who experiences it is transported.

We shouted with joy.

188  |  Across the Universe: Sins against the Earth

191  |  Across the Universe: Looking overhead