This column first appeared in The Tablet in May, 2010

“Adolescence,” said my colleague, the father of two teen-aged boys, “is when you’re filled with self-consciousness and completely lacking in self-awareness.” We were watching the students on his campus, obsessed with how they looked while being utterly out of touch with how they actually came across to other people.

Of course, it is not just teen-agers. We marvel at how politicians, whose business is selling themselves, can make themselves look so bad; or how often we hear advertising that provokes us to swear we’ll never buy that product. And then we wind up buying the goods anyway.

All of us spend our days walking around in a fog, self-obsessed while never really aware of ourselves or the universe in which we live. (Well, that’s true of me, anyway.)

Sometimes the fog is literally real. [In 2010, I was] participating in the Texas Star Party, a gathering of 500 amateur astronomers (and their telescopes) at a ranch somewhere west of Pecos to take advantage of the dark desert skies. Under these conditions, you can’t help but be struck at how much of the universe we regularly blind ourselves to with our self-inflicted haze of city lights.

The ranch meadows are covered with igloo-shaped tents and all manner of astronomical equipment. Faint red lights among them make their own constellations as each of us checks a star chart, and then peers down into the plumbing of lenses and mirrors that make up modern amateur equipment. 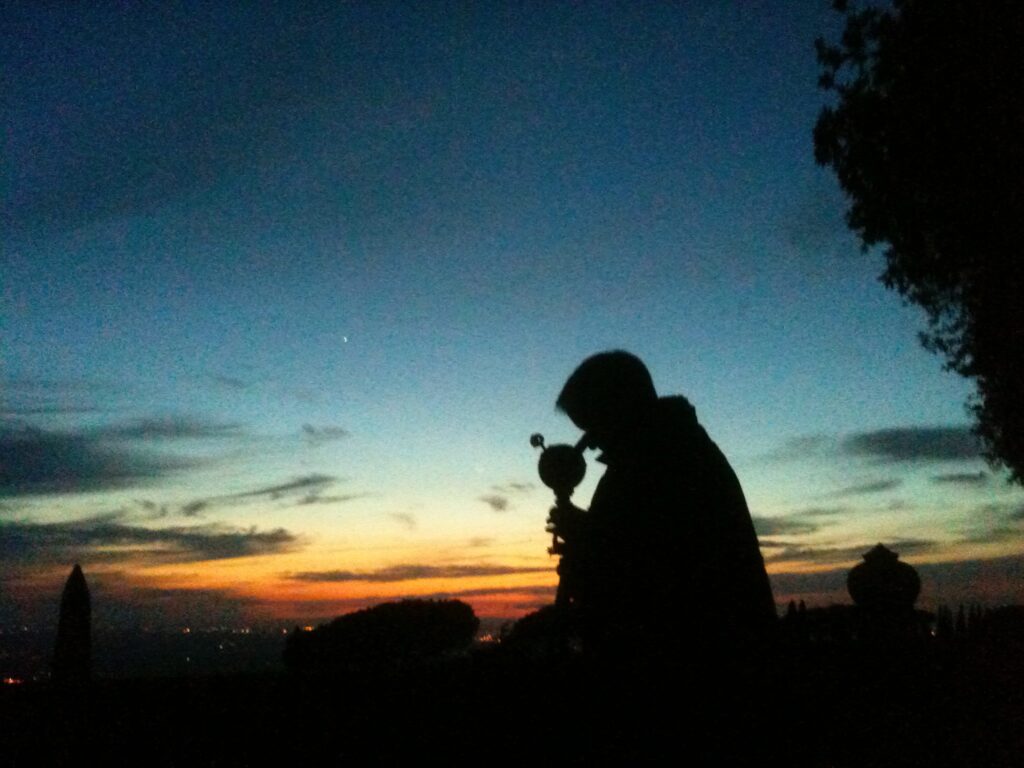 Overhead are so many stars that familiar constellations get lost in the crowd. Looking through my small telescope for a cluster of stars, I stumble across four other clusters I never noticed before. What looked like dim smudges of light back home become bright spirals of stars, galaxies that are themselves home to billions of other planetary systems with, no doubt, stargazers of their own peering back at us through some dim Andromendan sky.

Even the astronomers here are not immune to tunnel vision. “I am amazed at the number of shooting stars I’ve seen,” one woman tells me. But then she adds, somewhat sheepishly, “of course, most of the time when I am outdoors on a night like this, I am looking down into my telescope eyepiece instead of looking up at the sky.”

It’s not only the dark night sky that makes this week of observing special. It is the community of hundreds of other stargazers, chatting together in the dark, sharing ’scopes and stories, all possessed by the same obsession to look deeper into space. “Here, try this eyepiece. It doesn’t just give you a brighter image; it’s like sticking your head through a hole in the sky and looking around.” Stargazing is usually a solitary enterprise. Sharing it with others makes you feel odd, a bit self-conscious, a bit exposed. At the same time, we learn from each other, reassured that we’re not the only ones suddenly seeing things that most of us, most of the time, pretend don’t exist.

One of my fellow star-gazers here is a Methodist minister in Texas. As we are chatting in the glow of the dim red lights around the midnight snack bar, the teenager serving us coffee and hot chocolate suddenly breaks into our conversation to ask him where he got his training. “I’m off the seminary in the fall, myself,” she tells us delightedly, “to study youth ministry.”

And for a moment we share another bit of awareness, of the God whom all of us have experienced, each in our own ways, with our own eyepieces, both alone and in community; even while we live in a civilization that blares advertisements and political slogans to try to distract us, and replace that awareness with self-consciousness.