This column first ran in The Tablet in July 2010

In 1803, a team of French scientists investigated a fall of meteorites near the town of L’Aigle, and concluded that they were indeed samples from outside of Earth. It was a revolution comparable to Copernicus’: the Earth we live on does not exist isolated from all the other planets. 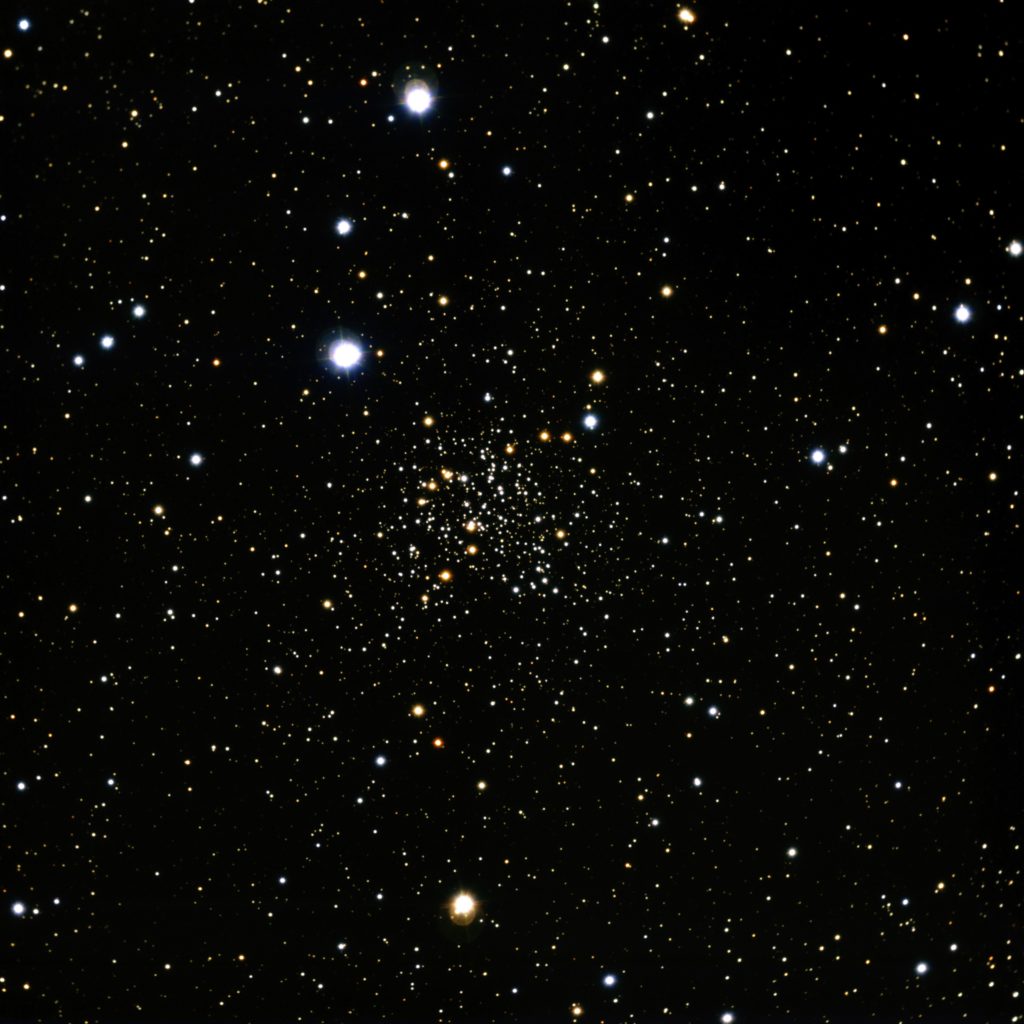 NGC 609 is an open cluster of young stars, siblings formed at the same time. Stars like our sun form in these sort of clusters. Early in their lifetime, when they were still close to each other, they may have shared and swapped comets from system to system. The water we drink on Earth may come from another own solar system! (VATT image)

Well, at least, not isolated from the asteroids, whose chips may come to us in the form of meteorites or, more often, as harmless showers of meteors. Surely the real planets, orbiting in simple, stable paths far from Earth, don’t touch us.

But about sixty years ago, we finally realized that some bits of outer space bigger than dust or rocks manage to hit us, exploding on impact with the energy of nuclear bombs, leaving giant craters. Thirty years ago, we came to admit that one that hit 65 million years ago was big enough to wipe out the dinosaurs. (About that time we also found meteorites from the Moon and Mars.)

Then, twenty years ago came the discovery of planets around other stars. Yes, Earth sits in a “Goldilocks” orbit, not too cold and not too hot, around our Sun; and the other planets in our system are comfortably far away from us, so that their gravitational pull is not likely to move us out of this comfort zone. But in the thousands of other planetary systems about other stars, such simple near-circular orbits are a rarity. Most planetary systems are far more chaotic.

About ten years ago, computer models for the orbits of the planets in our own solar system showed that it was itself once just as chaotic.

Since the mid 1800s we’ve known that orbits of the asteroids between Mars and Jupiter have been shaped by Jupiter’s gravity, which has tossed most of those bodies out of our own solar system. But conservation of momentum and energy means that as the asteroid debris was scattered outwards, Jupiter must have been moving inwards. That means there would have been a time when Jupiter wound up in an orbit (not all that far from where it is now) in a resonance with Saturn. And just as playing a musical note in resonance with the natural vibration of a glass causes it to shatter, having Jupiter pull on Saturn at a frequency in resonance with Saturn’s orbit would have shattered its orbit into a very eccentric path, one that in turn would have scattered Uranus and Neptune out to their present positions in the outer solar system. We can even see evidence for that scattering in the pattern of orbits of the newly-discovered trans-Neptunian objects, the thousand icy asteroids out where Pluto orbits.

In June [2010], at a workshop in Philadelphia on these trans-Neptunian objects, two more consequences of this game of orbital billiards were explored. One new model suggested that Uranus and Neptune weren’t the only giant planets moved about by Saturn during this episode. It proposed that another giant planet, formed with them, got itself completely ejected from our solar system during that time.

Even more startling was the suggestion that such episodes were also occurring in the other stars of the cluster from which our own Sun was formed. (We know stars are formed in clusters with hundreds of members; the Pleiades, visible to the naked eye, are an example of such a star cluster.) It could be that a lot of the comets in our own solar system started out as pieces of other stars’ systems.

Those comets may well have been the source of the water and carbon on Earth today. Our home planet has not merely been touched by other planets; our very bodies may be made from the ices of other stars.

The greater universe does not merely touch us. It is us.