This column first ran in The Tablet in June 2011

The typical scientist spends more time in front of a keyboard, writing, than in a lab or a telescope dome. That’s certainly true in my case. This past month has seen me busy with many different sorts of paperwork. 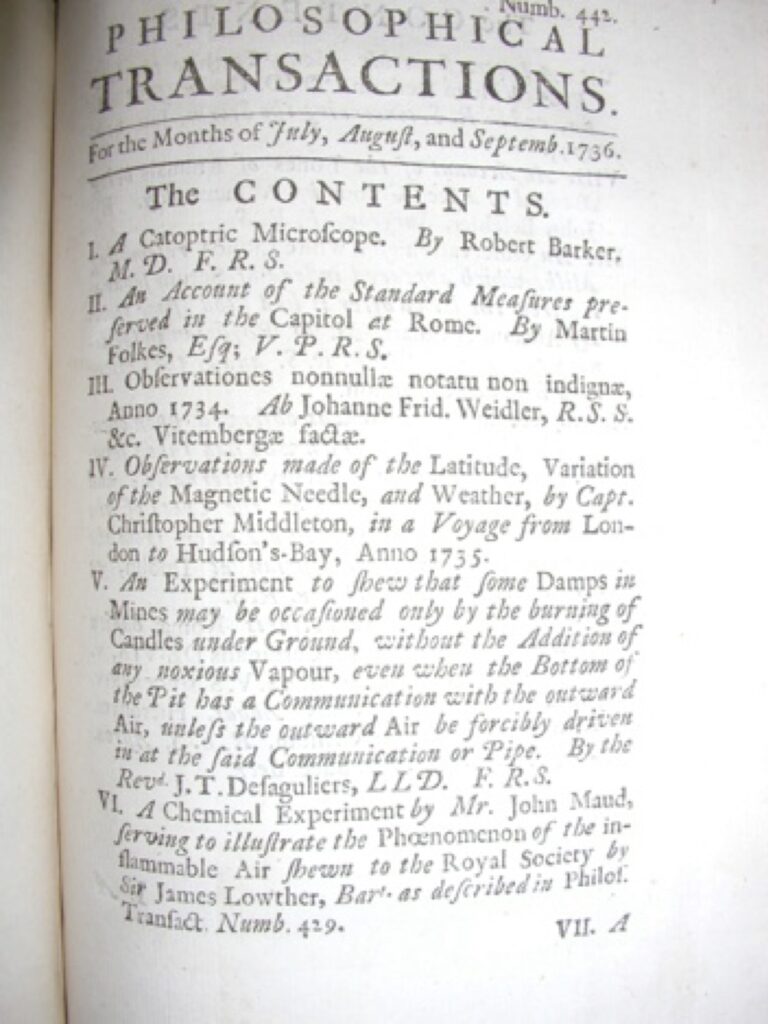 Table of Contents from the Philosophical Transactions of 1732. Notice that the authors are noblemen, doctors, and… clergy.

One task this month was serving as a referee for one of the journals in my field. When scientists want to publish a new idea or set of data, they write up an article in a quite rigid format, designed not to let the greatest number of people understand it, but rather such that the fewest possible might misunderstand it. They send it to the journal where they think it should be published; its editor then chooses other scientists in the field to referee the article, grading it with lots of red ink. This is all done anonymously, though the referees’ identities can often be deduced from their comments (“You neglected to reference the classic work of Consolmagno from 1977…”).

In the paper I evaluated, I thought the idea was brilliant (i.e., it matches my prejudices) and is almost certainly true (it matches…) but the authors, alas, failed to make their case. One fundamental piece of evidence, they merely asserted as true without explaining where they got their value; another essential data point they cited came from a paper that’s been submitted to another journal, but not yet accepted. If that journal’s referees find a flaw in that work, then this work would fall to the ground. There are rules about these things. Like a legal case, the chain of evidence must be clear, and free of any weak link.

Having judged a paper, this month I also put myself up to be judged. Though my own funding comes directly from the Vatican, I could not do my science without a team of collaborators who must pay their own salaries, and buy their expensive lab equipment, with money from Nasa. Thus every three years they must outline and justify a budget for what they (we) hope to do next. So I was busy for a week writing up how we plan to twist and freeze and otherwise torture meteorites to tease out values of their physical properties — how they respond to changes in force and temperature. Our proposal will in turn be judged by a panel of our colleagues.

We present our results at annual meetings; for me, this is the Meteoritical Society (which meets this August in Greenwich) and the Division for Planetary Sciences of the American Astronomical Union, which is holding a joint meeting this year with its European counterparts in Nantes, France, in October. We’ve barely started the research we hope to report by then. But short abstracts were already due this month, to reserve time at the meeting where we can present our results. Another bit of keyboard work. It’s a special art to write up, in the past tense, things that have not yet quite been accomplished…

On a day-to-day basis, the common work of a scientist is either sorting and filing data, or writing up reports. Clerical work. No surprise it has, over the centuries, been done so often by clerics. A skimming of old volumes of the Philosophical Transactions of the Royal Society (we have the Vatican’s complete run in our library) shows that, until about a hundred years ago, science was done mostly by noblemen, medical doctors, and Reverends. (That was before NASA grants.)

We have mentioned how a classical education is the foundation for many scientists’ education. Being able to communicate, clearly, is essential. If you didn’t write it down, and tell someone about it, it didn’t happen. Thus has my month been occupied by many writing tasks… the last of which will be completed by the end of this sentence.