This column first ran in The Tablet in April 2015

The guys who made our ALMA trip possible, Fernando Comeron (ESO representative to Chile) and Pierre Cox, ALMA director

At the edge of the world, the top of the world, is a window of our world into the rest of the universe: the telescopes of the European Southern Observatory (ESO) in Chile. Nearby are other large observatories at Cerro Tololo, Las Campanas, and the Alma radio array at Chajnantor. These telescopes have shown how the expansion of our universe is accelerating; they’ve explored hundreds of planets around other stars; they’ve traced the motions of stars orbiting a super-massive black hole at the center of our Milky Way galaxy.

I am visiting [in 2015] here with a half-dozen patrons who support such telescopes (including the Vatican’s own telescope in Arizona). Along with our host, Dr. Fernando Cameron, our small group includes a businessman who sits on the boards of universities; a retired schoolteacher; a NASA engineer… eclectic in background, but joined by a fascination of the bigger universe, and the instruments we’ve built on this remote desert mountain. Last night, after touring the telescopes at La Silla, we did our own small observations with binoculars and a nice amateur telescope to watch the clusters and nebulae only visible from this hemisphere of the Earth.

Eso is more than 50 years old, and some of the original telescopes now look almost quaint in their configuration — massive structures to support relatively small mirrors by today’s standards. The naming of these telescopes is also a lesson in humility; the “New Technology Telescope” is nearly 20 years old. But our tour will continue to even more remote sites in the Atacama desert, with new telescopes under construction whose names will some day also sound quaint: the “European Extremely Large Telescope” is already more than just European, and will doubtless be dwarfed by even larger instruments. 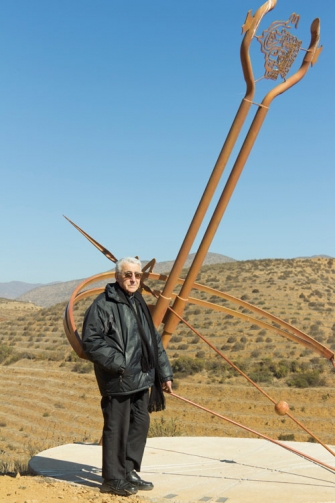 Fr. Picetti, from an article in the Chilean magazine Tell http://www.tell.cl/magazine/6134/laserena/agosto/2012/entrevistas/dios-y-el-universo.html

How do the locals feel about the presence of these expensive European toys in their back garden? Without a doubt, it’s a point of local pride. While we northerners have paid for them, it’s the locals who have built them and who maintain them; indeed, as part of the agreement to put them here, local astronomers are guaranteed a significant amount of time to use them. As a result, the astronomy programs in Chilean universities are magnets for talent from around the world.

Father Juan Bautista Picetti, a Basilian father from Italy, is a perfect example of that local connection. He arrived in Chile in 1955 and since then has served as a priest while teaching science, especially astronomy, in this part of the country. He set up a public observatory outside La Serena, the nearest city to these telescopes, that has inspired thousands of local students, including – but not limited to – many who have gone on to work at these observatories. This past year, an annual Picetti Prize was established by the Cerro Tololo observatory for promotion of astronomy to the public in this part of Chile. The winner gets a telescope to use at their school.

Astronomy is a science that is also an art. It won’t make you rich or powerful in the eyes of the world; it won’t fill your belly, but it feeds your soul – which, after all, requires more than bread. And souls, even in such a remote part of the earth as northern Chile, both need feeding and are capable of feeding the rest of us.

I first heard of Fr. Picetti from a student of his, our local guild, while visiting a small museum in the small town of Vicuña. It’s the birthplace of a certain Lucila Godoy Alcayaga, a poet and educator, who once taught a young Pablo Neruda. Writing under the name of Gabriela Mistral, she herself won the Nobel Prize for Literature in 1945. Windows to the universe can be found in surprising locations.

Observant readers may recall that I wrote four posts about our trip, published here in 2015…and Katie Steinke published a video about it, here!