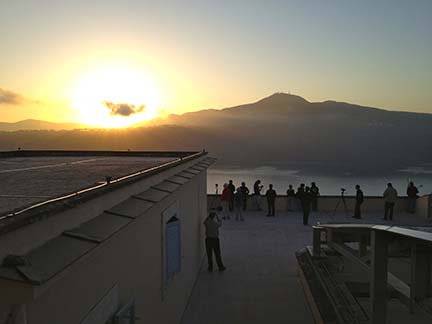 Sunrise in June from the Papal Palace in Castel Gandolfo. This particular sunrise occurred during the Transit of Venus on June 6, 2012

This column first ran in The Tablet in June 2013

This definition is based on the precise orientation of the Earth in its orbit. The Earth is tilted relative to its orbit, and like a gyroscope its spin axis stays pointed in the same direction, year round. In a convenient coincidence for navigators, our north pole is pointed near the star Polaris. Polaris is not directly above the Sun; it’s directly above Earth’s tilted spin axis. In June, the Earth is in the part of its orbit where it’s on one side of the Sun, and Polaris is on the other side. The northern half of the Earth, tilted towards Polaris, is also tilted towards the Sun; that’s why it gets warmer. The moment when Sun and Polaris are exactly lined up is the solstice, the beginning of our northern summer; that’s what occurred on June 21. Since the other hemisphere is pointed away, it’s winter there. Six months later, December 21, the positions and the seasons are reversed.

Julius Caesar’s “365 days plus a leap year” calendar almost exactly matched the time interval from solstice to solstice – off by less than a day per century. But after 1500 years the error had built up to ten days. Thus Pope Gregory XIII hired some astronomers to tweak the calendar, the first incarnation of the Vatican Observatory.

In the north we see the Sun in the southern sky; Australia always sees it in the north. In effect, we’re looking past the equator towards the Sun. When I lived in Kenya, on the equator, as the year progressed the Sun would first warm the northern half of my apartment, then move to warm the southern side. But what I also noticed in Kenya was that, even with the Sun spending as much time on one side as the other, January was actually much warmer than July. That’s because the Earth’s orbit is an ellipse, not a perfect circle. We are actually closer to the Sun in early January, and furthest away on the 4th of July. (Notice there’s about a five fewer days of northern winter than northern summer – recall how February’s shortchanged. Because of our elliptical orbit we move faster through the northern winter months.)

But the ellipticity of Earth’s orbit, and the position and tilt of our axis, are all items that slowly change with time. Over tens to hundreds of thousands of years, as they change our climate changes. We can see this in the geological record.

A slightly warmer winter in the north means we have moister, hence snowier, winters than in the south. As it happens there’s more landmass in the north, as well, to accumulate this snow. This accident of northern continental positions with warm wet winters, thanks to Earth’s current orbit, means we are actually in a mini ice age right now. Until recently, this has been carefully balanced by the carbon dioxide in the atmosphere, which keeps us from freezing over.

The issue with climate change isn’t that it’s changing; it has always changed. The problem is the rate of change. In the past fifty years the carbon dioxide has increased by 25%, hitting 400 ppm [in 2013]. That’s faster than our human institutions can cope. Our cities are not built to withstand the energetic storms that become more common when more carbon dioxide holds more energy in the air. Our seaports are vulnerable to a rising sea level as the pole caps melt.

In our own lives we make free choices, within parameters set by circumstances beyond our control. Likewise, dealing with climate change the trick is to find those things we actually can do something about; and then make wise choices.

134  |  Across the Universe: Ephemeral science