This column first appeared in The Tablet in November 2015 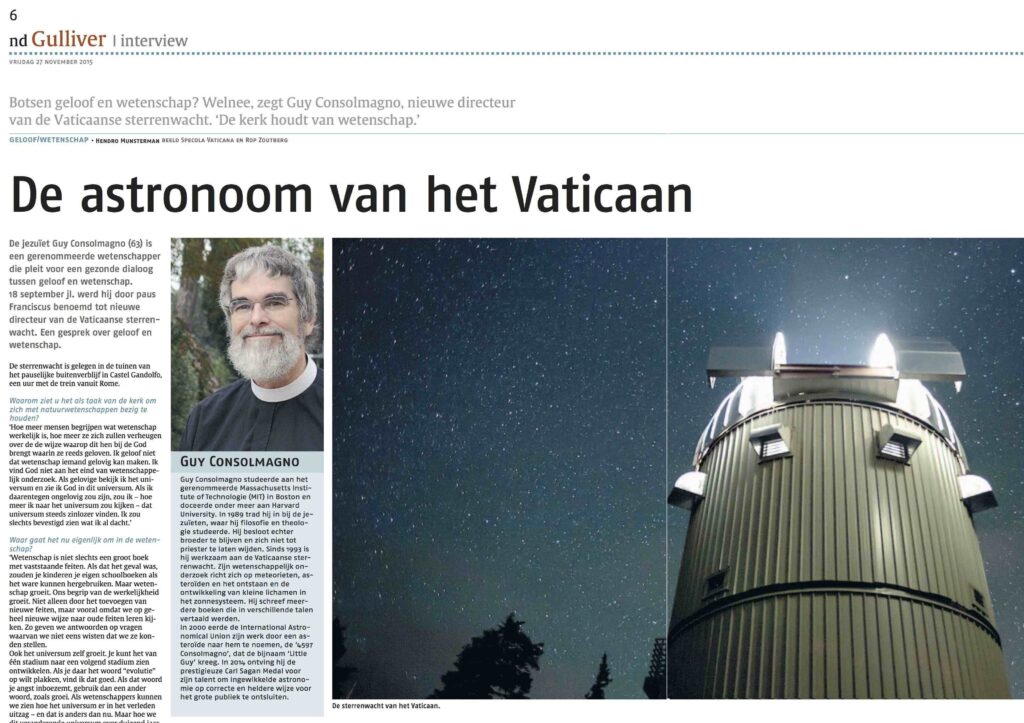 This interview was in Dutch, I think… click on the image if you want to try to read the text.

One of my tasks as the new [as of 2015] director of the Vatican Observatory is answering requests for interviews. They ask all the usual questions; of course, as any good teacher knows, the questions we get over and over are the ones we didn’t answer well the first time. But they also ask me some more interesting questions, as well. Here’s a sampling:

Why does the Vatican have an astronomer?

My role is to remind the general public, including members of the church, that our religion embraces good science.

Why are you doing astronomy when there are people starving in the world?

I learned the answer to that when I served in the US Peace Corps. When my African students learned I was an astronomer, they wanted to look through my little telescope and have the same joy in discovering the universe that I had. They, too, had an insatiable hunger to know about the universe. They reminded me: it’s not enough to feed the body; we also have to feed the soul.

Has the Vatican Observatory’s telescope in Arizona made any important discoveries?

Relatively small telescopes like ours are an important link in the chain of scientific discovery.

We can afford to spend the many hours it takes, often over years, to check out an idea and see if it works. So we’ve done surveys looking for color patterns in trans-neptunian asteroids, looking for massive compact halo objects around the Andromeda galaxy, looking for patterns in stars with peculiar spectra… I could reel off another dozen such programs.

None of them are the big discoveries that you’d find reported in the newspapers. But I don’t trust those sorts of discoveries; half the time the science you read about in the newspapers turns out to be… not quite right. Science is not done by breakthroughs, but by steady work, accumulating data, finding the jigsaw puzzle pieces and then assembling them, slowly, one piece at a time, until the whole picture becomes a little clearer.

Does astronomy support, or threaten, religion?

In science I get to know, intimately, God’s creation; it is a way of getting to know God. Anyone who feels that their faith is threatened by science, has no faith in their faith. And anyone who thinks their knowledge of God is perfect and complete already, also has a pretty poor idea of God!

Why are most scientists atheists?

You must have spoken to more scientists than I have! Gregor Mendel, who came up with the rules of genetics, was a monk; Georges Lemaitre, a priest, first devised the Big Bang theory… Besides, to be an atheist one must have a clear idea of the god one does not believe in. Most gods, I don’t believe in, either. I only believe in one more God than Stephen Hawking.

If God made everything, why do we need science?

There’s a difference between an ultimate cause and a proximate cause. God is the ultimate source for the universe exists with all its laws. But He is not one law alongside the others within the universe… it’s wrong to say, “gravity did this, electricity did that, God did this other thing…”

Dr. Hartmann of the Planetary Science Institute (in Tucson, Arizona) maintains that the dazzling light seen by St. Paul on the road to Damascus was a falling meteor!

Bill Hartmann is a good friend of mine, with a very creative imagination. But if every falling meteorite led to a religious conversion, we’d be swamped with saints. Which is too bad… we could use a few more saints.