The Mars Phoenix mission landed successfully near the north pole of Mars [in 2008]. Even though I don’t study Mars myself, I feel a special connection because the mission is being run out of my old department at the University of Arizona. I know those guys on the TV, explaining how they’ll be digging for ice in the Martian soil. 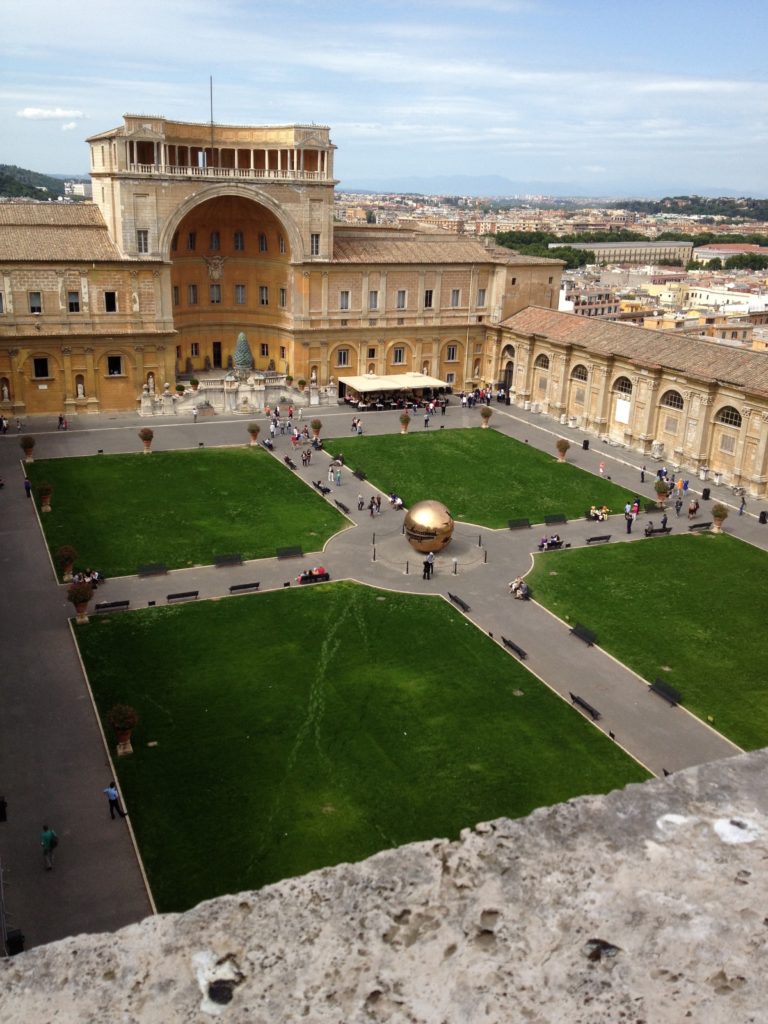 Astronomers love high places. This view of the Vatican Museums’ open courtyard was taken from the Tower of the Winds, where the Vatican Observatory had its first offices in 1891.

Mars wasn’t the only tourist attraction that summer. The scientists of the Cassini/Huygens Saturn probes held a team meeting in Rome in June, 2008, and two dozen of them came out to visit me at Castel Gandolfo. I showed them our telescopes and libraries and meteorite collection. Friends of mine on the team arranged the visit.

Why do I have so many friends in high places? It’s just the nature of my field. There are only a few thousand professional planetary astronomers in the world. We go to the same annual meetings, we see each other on grant proposal panels and telescope runs. I don’t know everyone in the field, but those I don’t, are probably friends of my friends.

Living in Rome creates another community of friends; the Italian culture, of course, thrives on knowing who-knows-who. A fellow I met a few years ago, when he taught at the Rome Center of the University of Dallas, came by earlier this month with a group of engineering students from the University of Colorado, where he teaches now. They too got the grand tour of the Observatory. Telescopes. Libraries. Meteorites. I’ve given this tour a few times now…

But for all I grumble about my time spent giving tours, the fact is that I’m happy to show the place around to friends, and to friends of friends. That’s my role in this network of connections. The reason the Church supports an Observatory is precisely so that people know the Church embraces science. Tours help get the word out. (Sorry, these tours are not generally available to the public. I only have so many hours in my day!)

Being a scientist as well as a Jesuit means that I can talk to other scientists about religious questions. Just such a conversation came up over pizza after my tour for the Colorado engineering students. Earlier that week they’d seen the sights of Rome, and they were puzzled — indeed, scandalized — by all the ornate churches full of paintings and statues of popes and saints. To their midwestern American sensibilities, it looked like all too much Popish Idolatry.

“It’s part of the Mediterranean culture,” I tried to explain. “Think of The Godfather. Instead of writing a letter to the Boss, you go to someone who knows someone who has an ‘in’ at the top.” My midwestern Protestants were not convinced.

Part of this clash of cultures is that, for Americans, saints are mythical figures of history: characters in books from times and places far, far away. It’s still a shock for me to realize that St. Bonaventure used to be the local bishop here in Albano; that St. Luigi Gonazaga’s novitiate is that building I walk past every time I visit Rome… on the same streets where Peter and Paul once walked. 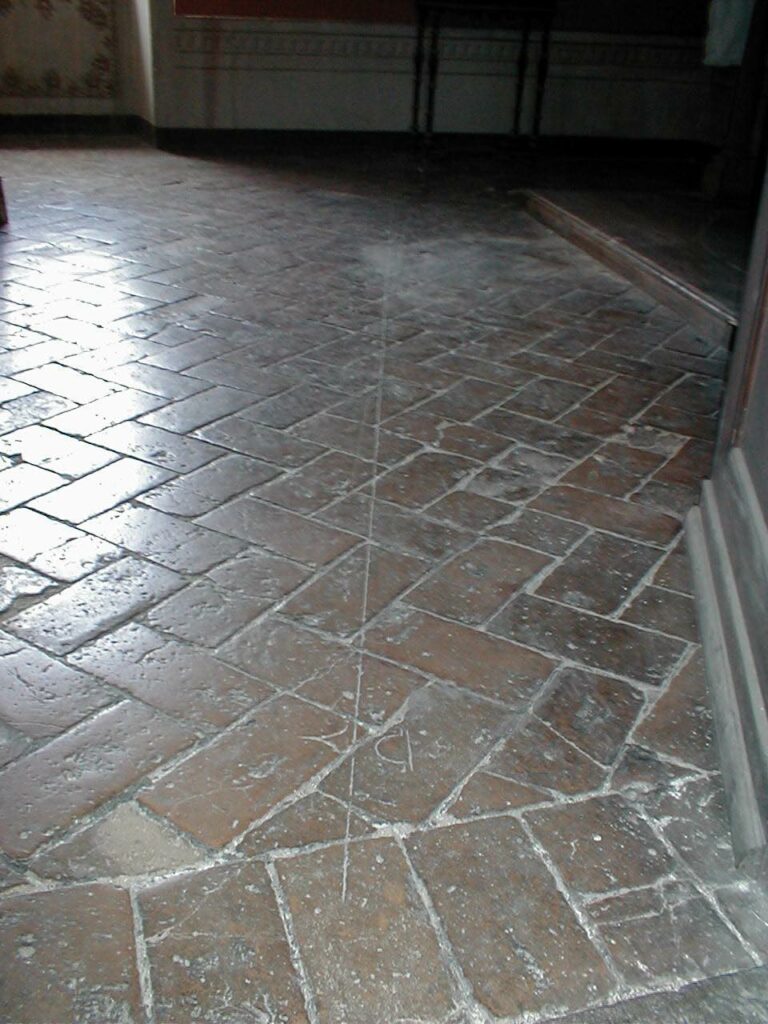 The rooms in Rome where St. Aloysius Gonzaga was a novice aren’t open to the public, but I was able to sneak in about 15 years ago… and I found this Meridian Line scratched on the floor!

Writing a letter to the boss implies a confrontation between two separate, conflicting entities: us vs. them. Going through a network of friends suggests, on the other hand, that we’re all part of the same community, the same communion. What was them, has become us.

[The University of Arizona Lunar and Planetary Lab is now running the OSIRIS-ReX mission to asteroid Bennu; the lead scientist for this mission was Mike Drake until his death in 2011. I was Mike’s first graduate student. The current lead scientist is Dante Lauretta, who was the PhD student of Bruce Fegley; Bruce was a classmate of mine at MIT. It is an exceedingly small world. There are probably more professional football players in the world than there are professional planetary scientists.]