This column first ran in The Tablet in May, 2012

“Men of Galilee, why are you standing there looking at the sky?” We heard that reading a week ago, celebrating the feast of the Ascension. At least, I think that’s what I heard; [in 2012], it was in Japanese, in the small cathedral in Niigata, during an international meeting on asteroids, comets, and meteors. 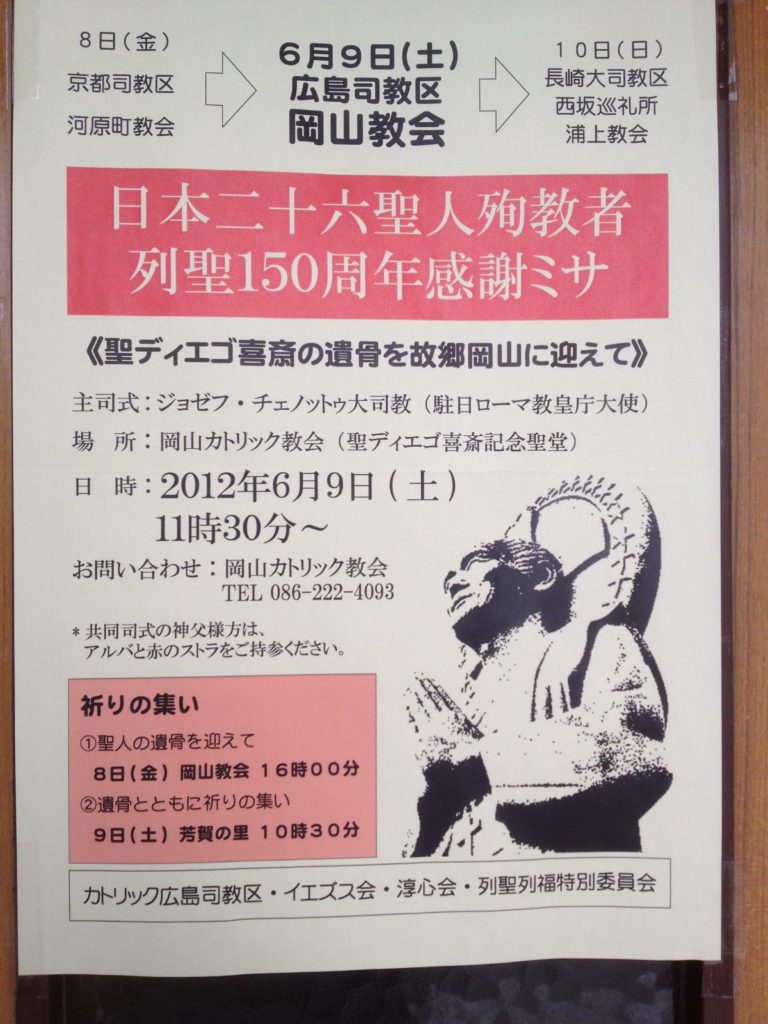 Parish announcements at the Niigata Cathedral

Why do we astronomers stand about, looking at the sky? We heard a number of reasons.

One scientist described Nasa’s ambitions to send astronauts to asteroids passing near the Earth. Their expressed reasons involve science (where do asteroids, and we, come from?); resources (commercial efforts to exploit asteroids); and planetary safety (how do we nudge an asteroid out of a collision path with Earth?). The unspoken motivation is political: astronauts at an asteroid is the kind of project that is both exciting and achievable, a reason for voters to support NASA’s budget.

We know right now of two small asteroids that have a non-negligible chance of hitting the Earth. Asteroid 2011 AG5 (a temporary name based on when it was discovered) has one-in-600 odds of hitting us in the year 2040. It’s roughly the size of a football stadium; we can’t be more specific without further observations, and by their nature these objects tend to be in orbits that make them hard to see from Earth, most of the time. If it hits, it would have the energy (but not the radiation) of a nuclear bomb. Odds are that it would impact the ocean, though the center of its currently predicted path also includes part of South America. Asteroid 2007 VK184 is slated to make its close approach in June, 2048; the odds of it hitting us are one in three thousand. We won’t be sure if either will actually touch us until we can measure their positions more precisely. But perhaps it would be useful to start planning for it now, just in case.

Smaller asteroids hit all the time. One presentation, slated to discuss 2008 TC3 (discovered as an asteroid, observed as a bolide, and recovered as a meteorite), started instead with a report of the latest meteorite fall, a suite of carbon-rich stones that hit on April 22 near the gold fields of Sutter’s Mill, California.

A meeting of scientists covering asteroids, comets, and meteors sounds like a recipe for cacophony. When I was a student these were all considered different fields, using different science tools to answer different questions about visibly different bodies. But we have learned in the last thirty years (since the first of these meetings was held) how interrelated these fields really are. We’ve found hot meteorite inclusions in cold comet dust, comets in the asteroid belt, and falling asteroids that contain many different types of meteorites. We need this common meeting ground, just as scientists meeting in Japan from around the world need a common language. Pentecost’s gift of tongues would be useful.

NASA’s plans for astronauts or asteroid deflection, like commercial plans to mine these bodies, depend on a very accurate knowledge of what exactly they are, where they are located, and how they are put together. That, in fact, is a pretty good summary of the questions that drive our scientific interests as well. To answer them, an armada of spacecraft are being assembled in Japan, Europe, and the Americas (including the US, Canada and Brazil). Some are already en-route, others being built right now, still others on the planning boards. Many of those planned spacecraft won’t bring us their data until the 2030’s. (I’ll be how old?) Being able to speak to the future may require another gift of tongues.

But then, maybe that was also true at Pentecost.