This column first ran in The Tablet in February 2015

My travels started in Boston, hit by a record number of massive snowstorms this winter; yet another blizzard trapped me inside the convention hotel all weekend. During a lull between storms, I was able to catch a flight to California… where the occasional flooding downpour failed to put an end to a five year drought.

Climate is not the same as weather, but weather certainly reflects climate. And our climate is in serious trouble. It’s not just the anecdotal bad storm; it’s the sustained change in weather patterns – five years of drought, for example – that is finally getting our attention.

One of the most common questions I get asked (just behind baptizing extraterrestrials!) deals with climate change. I give the same answer everywhere; the reaction I get varies wildly with the venue, however. Most of my questioners have already made up their mind that global climate change is either the fault of a conspiracy of evil capitalists, or the delusion of a conspiracy of evil socialists. Sadly, the poisoned politics of our time means that a large number of intelligent people put more effort into denying the problem, or identifying the villain, than in devising possible solutions… much less debating which of those solutions really would be the most effective and the most fair. 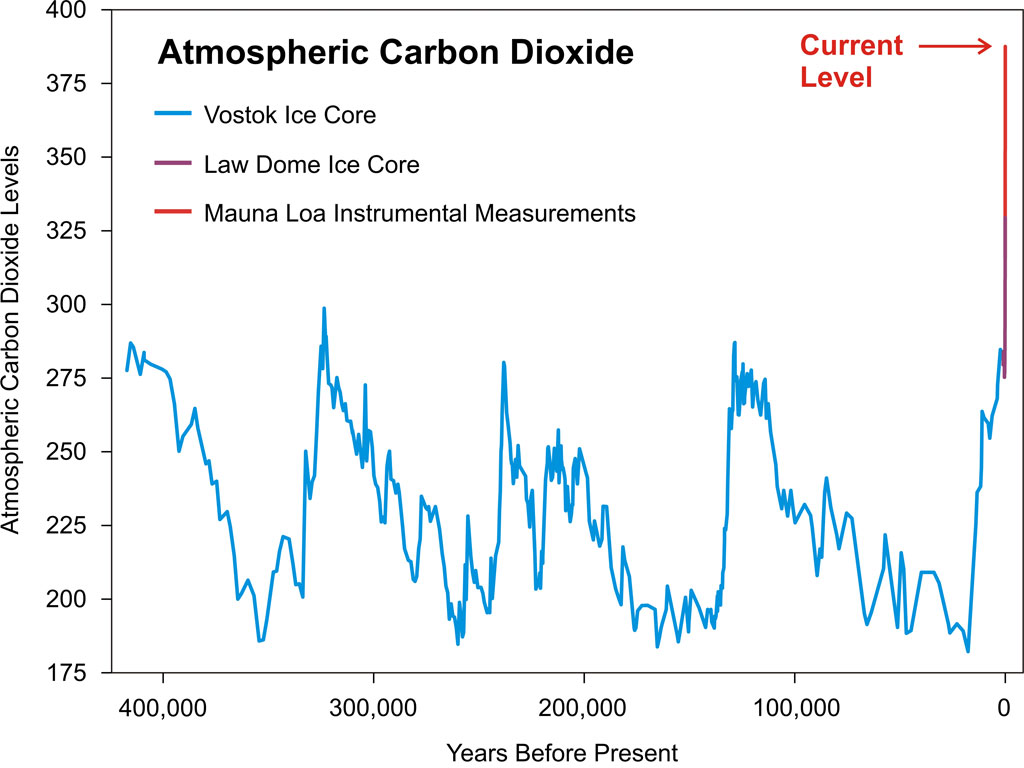 Carbon dioxide in our atmosphere is at an unprecedented level. That should not be in debate; rather, the debate should be about how best to address the problems that this brings.

A recent op-ed in a Tulsa, Oklahoma newspaper written by an oil company executive argues that since everything the experts told us about saturated fats turns out to be wrong, why should we believe the experts about climate change? I can’t speak to saturated fat research; the flaw in the rest of his logic is staggering, however. (Should I listen to that author because he is an energy expert?) The final blow was when he ended his article by citing me saying that “science is not about certainty.”

It’s precisely because science is never certain that we have to make decisions based on inadequate data… based on faith, as it were; but also based on what seems most likely, given the facts that we do have in hand.

The evidence is beyond question that the amount of carbon dioxide in the atmosphere has skyrocketed over the last two hundred years. We don’t know for certain what the long term effect of this increase will be, but it’s hard to see any effects that would be good news for humanity. (Yes, the Earth has had more carbon dioxide in its atmosphere in the past; it’s the rate of change that is unsettling… and the fact that the dinosaurs didn’t have large cities located on low-lying territory near the oceans, or rely on structures that are vulnerable to bouts of energetic weather.)

And this is not new research. A friend here in California showed me an article in a popular magazine from 1955 that pointed out the change in average temperatures that had been recorded even by then, with speculation that the increase of carbon dioxide in our atmosphere from the industrial revolution might be the culprit. Likewise, since the 1960’s we’ve known how carbon dioxide has altered the temperatures on Venus and Mars. There’s no reason to be surprised that it should happen on Earth as well.

It’s been widely reported that Pope Francis will soon be speaking out about our stewardship of this planet [this column was written about a month before Laudato Si’ came out!]. I have no input, insight, or inside scoop as to what he will say, but I can make a pretty shrewd guess. Most of the things that we’re told we ought to be doing – using less energy, developing renewable resources – are things we ought to have been doing in any event, climate change or no.

Perhaps humanity could use a season of fast and abstinence; or at least, we might swallow hard and admit our sins.