This column first ran in The Tablet in December 2011

Earlier this month [in 2011], I sent an email to a colleague asking for some data she’d promised me, and I got a rather apologetic reply: “Sorry, I am away from my computer; we’re in Stockholm this week.” Her husband, also an astronomer, had been part of Saul Perlmutter’s Supernova Cosmology Project, and Saul had invited the whole team to join him when he picked up his Nobel Prize for that work.

Perlmutter shared the prize with two other astronomers, Brian Schmidt and Adam Reiss. Together they and their collaborators made the most-precise-ever observations of the motions of distant galaxy clusters. Once they’d analyzed these data, they discovered that the universe is not only expanding (as Hubble had first observed more than 80 years ago), but expanding at an ever-faster rate. The energy behind this acceleration is unknown; Perlmutter and his group coined the term “dark energy” to indicate that we’re all in the dark as to what it really is. But whatever it is, it’s a huge and fundamental part of our universe, making up something like three quarters of all the mass and energy that exists. Three quarters of the universe… which we didn’t even know was there, twenty years ago.

Saul Perlmutter is at the left; these are some of his team, at the National Energy Research Scientific Computing Center (NERSC) at Lawrence Berkeley National Laboratory.

It was, no doubt, a pretty crowded stage in Stockholm. And even the team members present were only a fraction of all the people whose efforts went into making that discovery. Think of the technicians who operated and maintained the telescopes that they used; or the folks who designed and built those telescopes. Think of the theorists whose previous work inspired those observations. Think of all the high school teachers who taught all those technicians and scientists, and all the teachers who in turn taught them.

Science is not the activity of some lone genius. For all the stereotypes of the nerd with no social skills, in fact it’s a rare scientific paper that has only one author. Techies work in teams.

This sort of teamwork is also true of another astonishing discovery that we celebrate this month: the epiphany at the manger in Bethlehem. The incarnation of God Himself into His creation was an event far more unexpected, and stunning, than any Nobel experiment. But what is even more remarkable is the way that it occurred.

God could have appeared, fully grown, like some eastern avatar on a cloud of power and glory, single-handedly dispensing justice right and left. He didn’t. Instead, he appeared as an infant, weak and helpless, dependent upon the efforts of others.

First of that team of co-authors was of course his mother, Mary, whose choice at the Annunciation was the essential act that allowed the rest of the story to unfold. Joseph and Elizabeth played their crucial parts, as well. But in addition, the teams of shepherds and Magi, pharisees and tax collectors, Roman officials and evangelists, all worked to support the project and carry it forward to its completion. The creche scenes we set up during this season are pretty crowded, too. 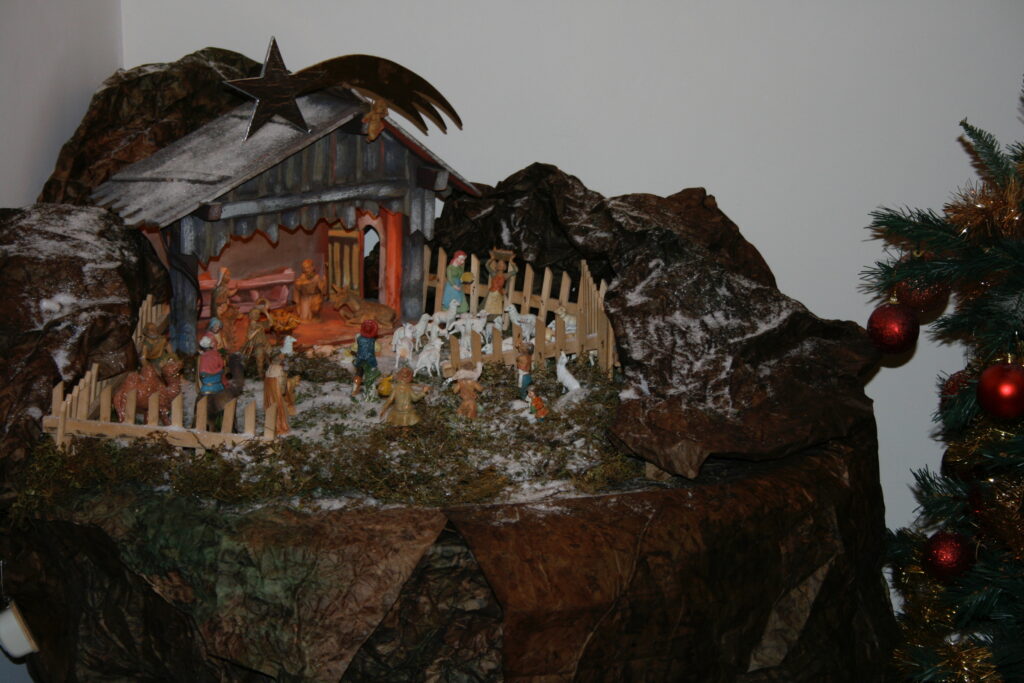 Our crèche scene in Castel Gandolfo… another set of collaborators.

Every scientific team is a family – some more functional than others! When things go especially well, this family celebrates the success of its work with a presentation, a publication, or even a trip to Stockholm. Likewise, our family gatherings this season echo the collaboration at the creche, with everyone playing a role, from the children setting the table to the elders pouring the wine and reminiscing of Christmases past.

God so loved the world, we are told, that He sent his only Son. But more than that, He so loved us that he gave us all something to do in the drama. That expansion of His task of redemption to include we who are being redeemed, is as mysterious, exciting, and surprising as any dark energy.