This column first ran in The Tablet in July 2013

I was in a state of high excitement (or what passes for such when you’re sixty years old): the Pope was coming to lunch with our Jesuit community at the Vatican Observatory! Meanwhile, I was also preparing a paper for the annual Meteoritical Society meeting, and I had just noticed a wonderful correlation in my data. These sorts of insights are as rare as Papal visits… if indeed I had really made one.

Cutting into an iron meteorite (this is Mt. Dooling) reveals dark sulfide inclusions, along with the famous crystal pattern of nickel-rich and nickel-poor metal

I’ve been studying iron meteorites; and it’s been hard work. For one thing, they are, quite literally, hard – lumps of nickel-iron, too hard to cut up easily to see what’s inside. I’ve seen iron meteorites being cut at the Smithsonian in Washington, DC; their saw sits in a room the size of gymnasium, makes an awful racket, and spews water everywhere. (The water cools the meteorite while a diamond-encrusted wire scrapes through it.)

When you do slice them open, you find iron crystals several millimeters wide, alternately nickel rich and nickel poor, along with similarly large lumps of sulfide. The meteorites in our collection have another ingredient as well: rust, the result of sitting in the ground for hundreds of years after their fall before being found by some collector. You might see sulfides or rust on the surface of a sample, but there’s no way to tell how much is present inside. Likewise, iron meteorites are classified by their nickel and other trace element content; but you can’t tell their class just by looking. 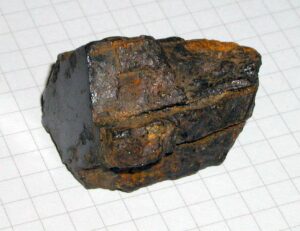 The meteorite Agustinovka is a rusty lump of iron, which could have lumps of sulfide hidden inside… somewhere.

But I can measure their densities. And if I drop them in liquid nitrogen, I can measure how much nitrogen boils away, which tells me how much heat they hold. Both density and heat capacity ought to vary with the nickel, sulfide, or rust that’s present.

I’d measured dozens of iron meteorite samples, and when I plotted density against heat capacity I saw a nice “vee-shaped” pattern. The sample that plotted at the point of the V looked to be free of sulfides or rust; the rustier meteorites plotted farther from this point. When I measured one sample that was almost completely sulfide, it plotted far from the others – as expected – but exactly on a line with one of the strokes of the “V”. Clearly, the more sulfide a sample has, the further along this line it should plot!

The next step would be to measure some very rusty meteorites, samples so degraded that I’d never thought I would have a use for them. I knew, in my heart, that these would certainly plot along the other stroke of the V; where one trend showed me the sulfide content, the other should show the rust content. The Pope’s wonderful visit came first; but once that was over I could get back into the lab and prove my thesis. 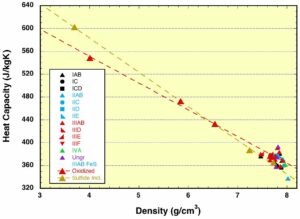 With only a handful of points it’s always tempting, but risky, to jump to the conclusion that we’re seeing real trends in the data

The result? Yes, they plot exactly on a line; but the wrong line. The rusty samples line up exactly on the same line as the sulfide sample. In other words, I have no idea what’s going.

An “insight” is to “see in”, to see what is hidden within; but my vision here is still cloudy. Maybe when I present this result at our convention, some colleague will have a helpful idea. That’s why we do science as a community; talking about it with other people helps us further our insights.

But the social aspect of science is also what motivates me to do the work in the first place. The excitement I felt was not only anticipating a new discovery, but anticipating the fun of telling my colleagues about it. That’s the joy of being with a friend, whether it’s a scientist or a Pope: sharing insights, stories, or a meal. That’s what the Mass is, after all.