ESA’s Rosetta spacecraft arrived at comet 67P/Churyumov–Gerasimenko on August 6, 2014. Launched more than ten years earlier, upon arrival it took up an orbit around the sun that parallels the comet’s path, to keep the comet in its cameras from a distance of only a few tens of kilometers. The next two months saw intense preparation for the final stage of the mission: in mid November, 2014, a lander was sent to the comet’s dark surface with instruments to measure its composition in close up detail. (The original plan was for it to drill about 20 cm into the comet itself, to pierce the dusty crust and reach the icy material beneath. Alas, it landed into a shadowed region and was not able to get enough power to do its job or communicate with the orbiter… its fate is described here, on the ESA website.)

Comets are famously known as “dirty snowballs”, accumulations of ice and dust. When they approach the Sun and warm up, the ice turns to gas, producing the glorious comet tail and a “coma” of gas and dust that obscures comet’s core from our earth-based telescopes; hence the need for close-up views from a spacecraft. Meanwhile, as the ice boils off it also leaves behind a slag of dark dust masking the icy interior; hence the surface drill.

This space probe was named “Rosetta” in the hope that, like the Rosetta Stone, it would help us interpret the original composition and physical state of the material that formed the planets, four and a half billion years ago. The images it has sent us of the comet’s shape and surface already have shown that some small bodies in our solar system, like this comet, can be “contact binaries:” two distinct lumps with a bridge of material gluing them together. On seeing the first clear images of Comet 67P’s shape, some scientists on Twitter immediately dubbed it the “rubber ducky” comet.

First seen in 1969, this comet is named for its discoverers, the Ukrainians Klim Churyumoy and Svetlana Gerasimenko. Recently, when Dr. Geramisenko was asked, “did you ever think that one day people might plan to land on this comet?” she replied, “I had dreamed of it, yet did not think it would happen so fast… life has presented me a great gift.”

Dreams of flights to a comet fit in well with another event in August 2014, the annual World Science Fiction convention held that year at the ExCeL Center in London. Ten thousand writers, editors, and readers gathered to talk business – both science and fiction – and speculate about the future of a world that already has dystopian global warming, instant universal knowledge in your pocket, and spaceships to comets.

The popular culture likes to poke fun at SF fans from a distance. I’ve attended these conventions for more than 40 years. Unlike the stereotype of the spotty young-white-male, today’s attendees show a remarkable age and gender balance. Yes, some of us “look funny;” there are more disabled and otherwise physically challenged folk here than you usually see in, say, a typical television sitcom. And if some of us enjoy the chance to disguise ourselves in exotic costumes, it’s only a healthy reminder not to mistake the surface for what’s inside. 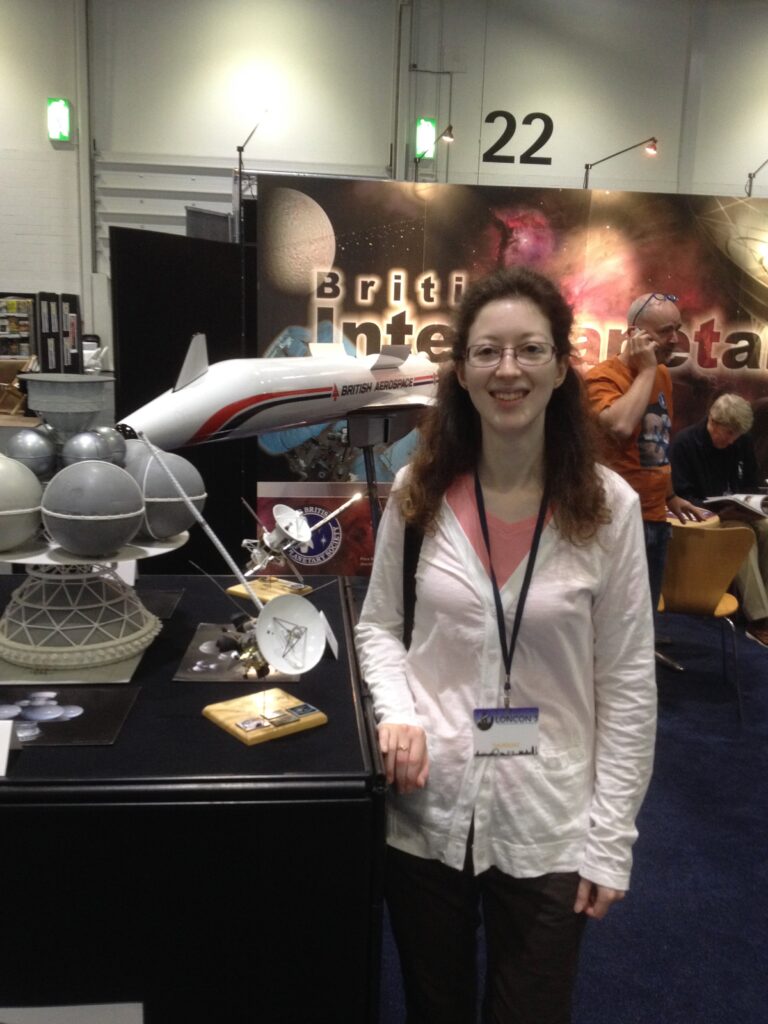 I met up at LonCon, in front of the British Interplanetary Society exhibit, with astronomer Daiana Di Nino. She and her husband, Michele Trenti, taught at our 2014 Vatican Observatory Summer School; they were finishing up their time at Cambridge University at the time of the convention. They are now at the University of Melbourne, Australia.

But in fact it’s very misleading to make assumptions about science fiction fans. No two are alike in background or taste; any attempt to lump us together, gets us wrong. This diversity speaks both to the welcoming nature of SF fandom, and the universal nature of the ability – and desire – to dream.

Turns out, that’s also true of comets. For all we’ll learn about Rosetta’s target, we know a single visit won’t let us completely understand all comets. Indeed, spacecraft have visited half a dozen different comet nuclei to date, and no two of them are alike. Comets, like SF fans, are individuals.

It’s an echo of what theologians call “the scandal of particularity.”