This column first ran in The Tablet in October 2015

G. K. Chesterton once made an off-hand comment in Orthodoxy about the tasks one would expect only an expert to perform, such as “playing the church organ, painting on vellum, discovering the North Pole (that insidious habit)…” That last example always caught my attention. Finding the Pole is a habit? Presumably the North Pole could only be discovered once!

But in 1908, when Orthodoxy was published, finding the North Pole was the claim of countless adventurers seeking glory, all of them unsuccessful up to then. (Not that anyone doubted the Pole was there.)

Chesterton’s phrase came to my mind this month [2015] with NASA’s latest announcement that they’d discovered water on Mars. Again? That insidious habit! No one seems to have made a firm count, but I suspect NASA must have announced the discovery of water on Mars at least a dozen times over the past forty years.

River channels were seen on the surface of Mars by the Mariner and Viking orbiters in the 1970s. Water was extracted from Martian meteorites in 1995. Patches of subsurface ice were uncovered by the 1995 Phoenix lander near the Martian pole. Hydrogen from subsurface water ice has been mapped across Mars’ surface by modern orbiters. Mars rovers have found minerals made in the presence of water. For that matter, water vapor was claimed in Mars’ atmosphere (not to mention the infamous canals) as far back as 1896, long before there was a NASA to take credit. And, indeed, the Italian Jesuit astronomer Angelo Secchi first noted Mars’ icy pole caps back in 1859. 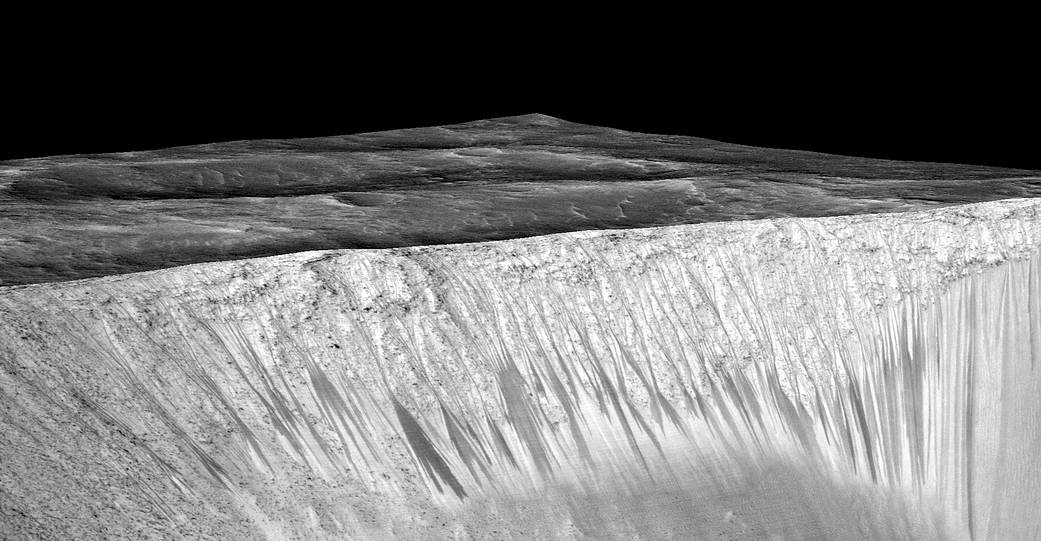 Dark narrow streaks, called “recurring slope lineae,” emanate from the walls of Garni Crater on Mars, in this view constructed from observations by the High Resolution Imaging Science Experiment (HiRISE) camera on NASA’s Mars Reconnaissance Orbiter. The dark streaks here are up to few hundred yards, or meters, long. They are hypothesized to be formed by flow of briny liquid water on Mars. The image was produced by first creating a 3-D computer model (a digital terrain map) of the area based on stereo information from two HiRISE observations, and then draping an image over the land-shape model. The vertical dimension is exaggerated by a factor of 1.5 compared to horizontal dimensions. The draped image is a red waveband (monochrome) product from HiRISE observation ESP_031059_1685, taken on March 12, 2013 at 11.5 degrees south latitude, 290.3 degrees east longitude. Other image products from this observation are at http://hirise.lpl.arizona.edu/ESP_031059_1685. Image Credit: NASA/JPL-Caltech/Univ. of Arizona

The discovery that NASA is ballyhooing this time is actually a nice bit of work. Spectra of the areas near some transitory dark streaks, running down slopes on Mars – streaks first noticed 15 years ago – show evidence of salts like you’d expect from evaporating flows of brine. This tells us that salty liquid water must be bubbling up from below the surface, right now. Nice; hardly a breakthrough. But as a rule, science does not advance with “breakthroughs” worthy of a press conference. It’s slow, tedious, incremental work. The cathedral is built one stone at a time.

What’s more, scientific knowledge is not the same as “proof.” It is never certain, never finished. Even as the data stay constant, the way we understand the data is in constant flux. (We now know that the “canals” were optical illusions, and even Secchi’s pole caps are dry ice as well as water ice.) That’s why science is such quicksand as a foundation for any theology or philosophy.

Still, people seem to make a habit of using the latest new scientific hypothesis to justify theological ideas that have been around long before the science. In The Great Partnership, Rabbi Jonathan Sacks notes the irony of the oft-quoted Nobel atheist cosmologist who proclaimed that “the more the universe seems comprehensible, the more it seems pointless.” The lament of a meaningless universe hardly depends on modern cosmology; it can be found in Ecclesiastes: “Vanity of vanities…”

There is nothing new under the sun. A recent article [in the Tablet] has suggested that modern astronomy would have us do away with Original Sin. For the reasons outlined above, I suspect this is somewhat stretching the science. I leave the last word on evidence-based theology, however, to Chesterton.

“Certain new theologians,” he wrote in 1908, “dispute original sin, which is the only part of Christian theology which can really be proved.  Some… in their almost too fastidious spirituality, admit divine sinlessness, which they cannot see even in their dreams. But they essentially deny human sin, which they can see in the street.”