The following column was published in The Tablet in November 2009; we ran it again here in 2016. This is the version I finally submitted of the column posted here yesterday… 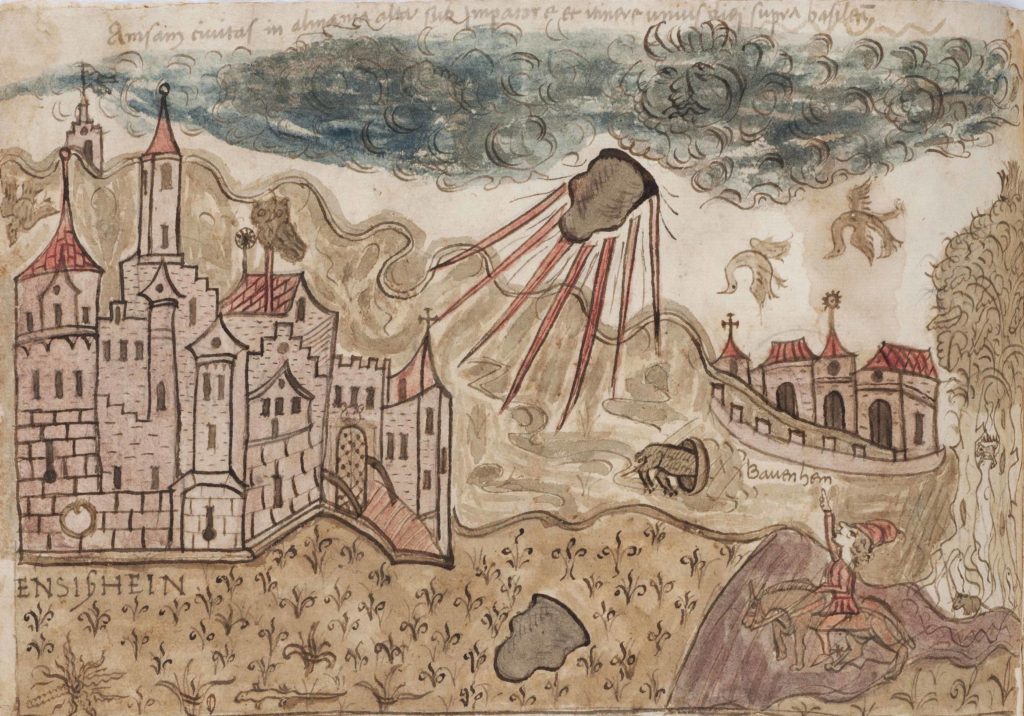 You will know the end-times by their signs, we’re told in the Gospel readings at this time of year. Given the nature of those signs, mostly dramatic events in the sky, you can imagine the kinds of questions that are typically addressed to those of us who study meteorite falls. The apocalyptic visions in the Gospels bear a certain resemblance to our understanding of the destruction that an asteroid impact would produce. Is it mere coincidence? Do I have any advice for the fearful? Yes: read the Gospel passages in their context as lessons on how to live, not how we’ll die. Meanwhile, quit smoking and wear your seat belt.

That said, what does science tell us about the end of the world? We know that our solar system has a finite lifetime. Stars like our Sun can only shine for about ten billion years before they run out of nuclear fuel; we are already halfway through that lifetime. We’ve observed other stars “go nova” and explode when the fuel runs out. If it happens to other stars, it should happen to ours.

Could Earth be hit by an object big enough to wipe out most of life on the surface of this planet? An asteroid only a few tens of kilometers across could ignite massive fires where it hit, sending soot into the upper atmosphere to cut off sunlight over the whole earth and freeze us all: Robert Frost’s “fire and ice” both, together. The odds of it happening in any given year are one in a hundred million, but it’s not impossible. Probably something like this happened 65 million years ago when the dinosaurs died. And we know debris from space hits other planets all the time. With even a small pair of binoculars you can see craters on the Moon; most other planets’ surfaces show similar scars. If it happens to other planets, it should happen to ours.

But destruction is not the only thing that can rain from space onto Earth. Comets, asteroids, and meteors may also be the source of the organic materials that are the ingredients of life. How did that raw material turn itself into plants and animals? And could it happen on other planets? If it happened on ours, it should happen to other planets, around other stars.

Those are the topics of the modern science of astrobiology; this past month [November 2009] the Vatican Observatory ran a study week for thirty astrobiologists at the Pontifical Academy of Sciences. Thinking about extraterrestrial life is not at all new for us, or for the church, of course. I can find in our files coverage of such topics in the popular press going back at least fifty years. For that matter, in the late middle ages, Bishop Nicholas of Cusa speculated on many Earths and many suns. And in the scriptures are plenty of references to other non-terrestrial intelligences, from angels to the stars themselves who (Baruch 3:35) sing for joy, telling their Creator “here we are!”

Of course we don’t know yet how life arose, much less how it will die. The astrobiologists have no fear of running out of things to study. To say merely “God does it” is an insufficient answer, reducing Him to nothing more than a new Jove or Ceres. It’s a new paganism. The medieval scholastics understood the difference between primary and secondary causes, and indeed the ancient Hebrew author of Genesis happily adapted Babylonian science while rejecting Babylonian gods. If their cosmologies could handle that, so can ours.

Our concept of “world” – much less its end – is very different now than when Jesus spoke. Yet His message remains potent. Our concepts of heaven and earth may pass away, but his words are no less relevant.

105  |  Across the Universe: Immigrant Stars