Scientists who do experiments need material to experiment on. Thirty years ago, a grad student friend of mine ran into a problem researching motor skill development in infants because there were too many other students in her field writing theses, and not nearly enough infants available in her university town with parents willing to have them studied. (Ironically, my friend was herself pregnant at the time. Her baby, now grown, defended her own psychology dissertation in the fall of 2012; she’s now a psychology professor herself. And a mom, as well.)

In meteoritics we cannot advertise for samples, much less produce them ourselves. We have to wait for our subject matter to fall, like manna, from the heavens. In 2012, however, we were fortunate to have two fascinating new meteorites land at our feet. They were each the subject of special sessions at the annual Meteoritical Society meeting that year in Cairns, Australia. (Appropriately, the cathedral in Cairns houses a spectacular series of modern stained glass windows depicting the Genesis of the Universe.)

The creation of the Earth as imaged in the stained glass of Cairns Cathedral. Note the planets in the first pane, and the infalling meteors in the second pane. (Scanned from the St. Monica’s Cathedral Creation Windows perpetual calendar.)

The first fell a year ago in Morocco near the village of Tissint. It’s a special kind of meteorite called a “shergottite” (the type example landed near the village of Shergotty, India, in 1865): one of those rare meteorites that we’re pretty sure comes from Mars. While almost all meteorites were crystalized back at the beginning of the solar system, 4.5 billion years ago, Tissint is a mere half billion years old… younger even than the youngest Moon rock, implying that it came from a body bigger than even the Moon and thus able to hold onto its heat longer (hence its younger age). Where almost all meteorites are poor in oxygen, this one was formed where oxygen and carbon dioxide were abundant – like Mars. And, the final kicker, shergottites have been found to contain bubbles of air whose composition exactly match the unique chemical make-up of the atmosphere measured by our rovers, like Curiosity, on Mars. 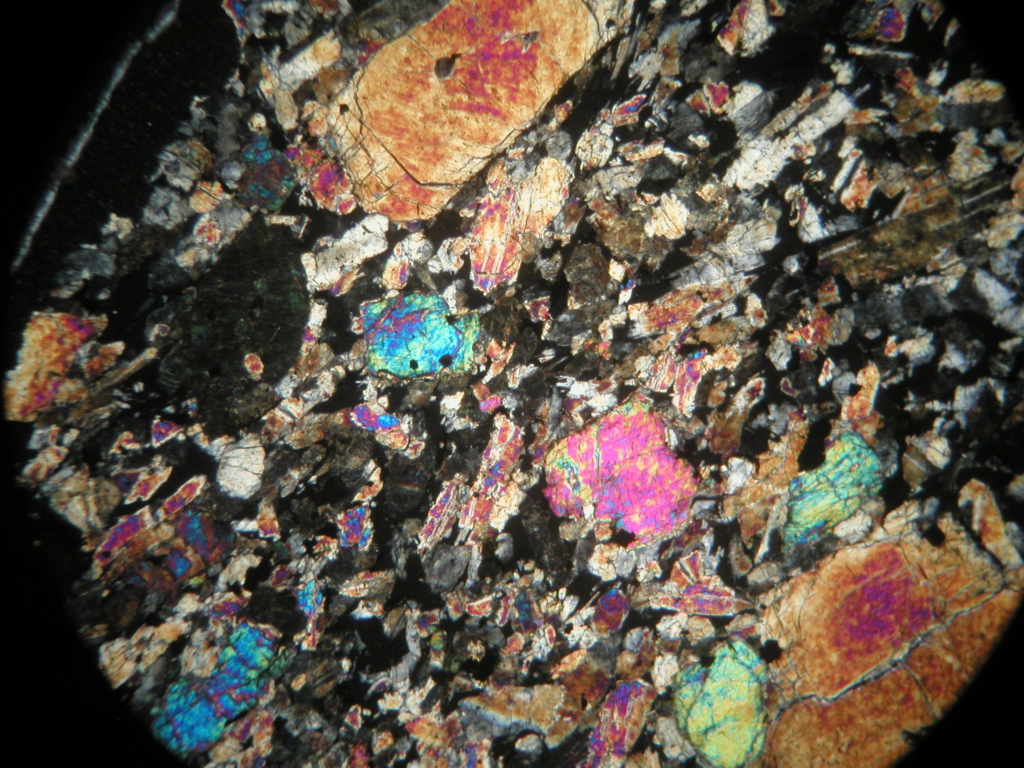 A thin section under crossed polarization of the Martian meteorite Tissant, from the Vatican collection. The different crystals at submillimeter scale make their own version of a stained glass window.

Tissint is a wonderfully typical example of such a rock. It’s special only in that it’s fresh, recovered soon after it was seen to fall; there was essentially no time for it to have been contaminated by Earth elements – or Earth life. Looking carefully at pieces carved from the center of this meteorite, we can put new limits on the concentration and composition of organic chemicals with some confidence that what we’re seeing really came to us from Mars.

The other meteorite arrived this April near Sutter’s Mill, California. That town became famous in  1849 when gold was discovered there, setting off a rush to California that hasn’t let up yet. Prices for bits of this meteorite soon skyrocketed past the dollars-per-gram on offer for gold as news of its fall spread. One group of hunters even hired a Zeppelin (hangered at the nearby NASA Ames Research Center) to fly slow and low over the fields where it was seen to fall. It’s one of the rare carbonaceous chondrite types, but chemically unusual even compared to other examples of its class. Again, having fresh samples raised hopes of getting uncontaminated measurements; alas, only a few samples were recovered before rains hit the strewn field. 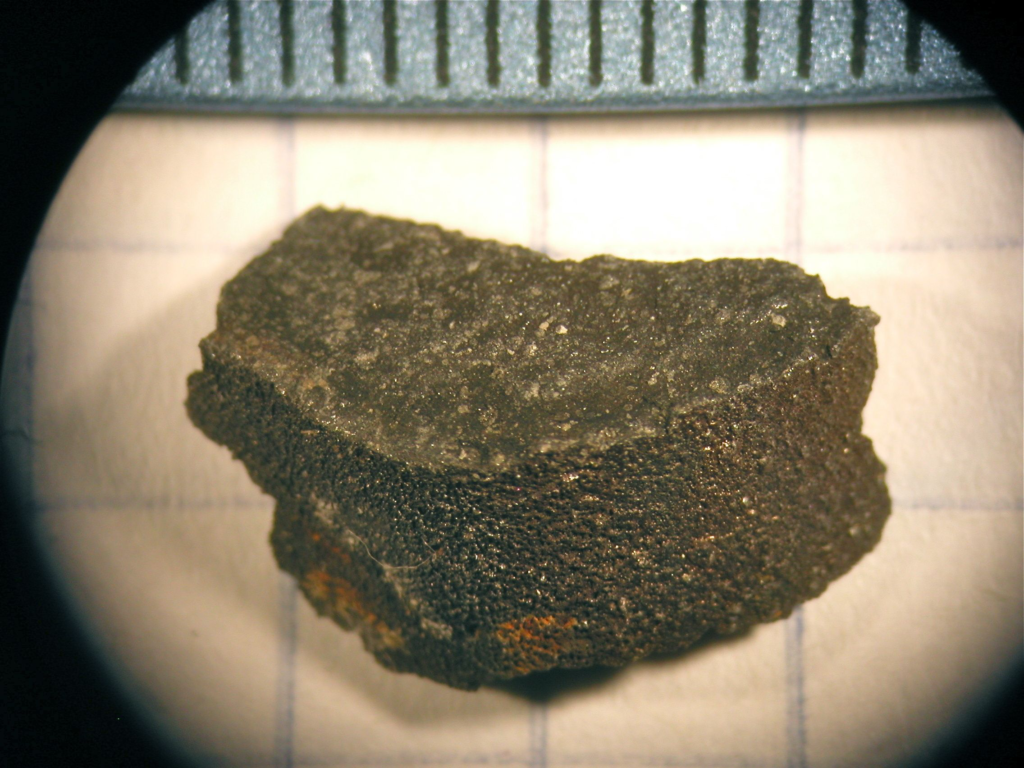 A one-half gram fragment of the Sutter’s Mill meteorite, from the Vatican Collection, gift of Greg Hupe

Our lab has measured the physical properties of both samples. Tissint is perfectly ordinary in its density, porosity, and magnetic properties; Sutter’s Mill is unusual in being very porous but very hard – a surprising combination that we’re still trying to puzzle out.

Whether you study rocks or babies, you need to know both kinds of samples, the typical and the extraordinary. You can’t remark on what’s unusual without knowing what “normal” looks like. Granted, it seems odd to call “normal” something as remarkable as a Mars meteorite. But then, how many other miracles, like meteorites and babies, do we take for granted every day?