The year 2017 has been one of many destructive hurricanes. Five years earlier, I endured Hurricane Sandy. That month I ran a diary of my experiences in The Tablet. This column first ran in The Tablet in November 2012

October 29: I’ve been staying at the home of my friends Dan and Léonie in Long Island, New York, since Friday afternoon. My plan had been to visit over the weekend before flying back to Rome. Then Hurricane Sandy arrived. We lost power about 4:30 pm on Monday, and spent the evening in the dark, playing various “Twenty Questions” games. 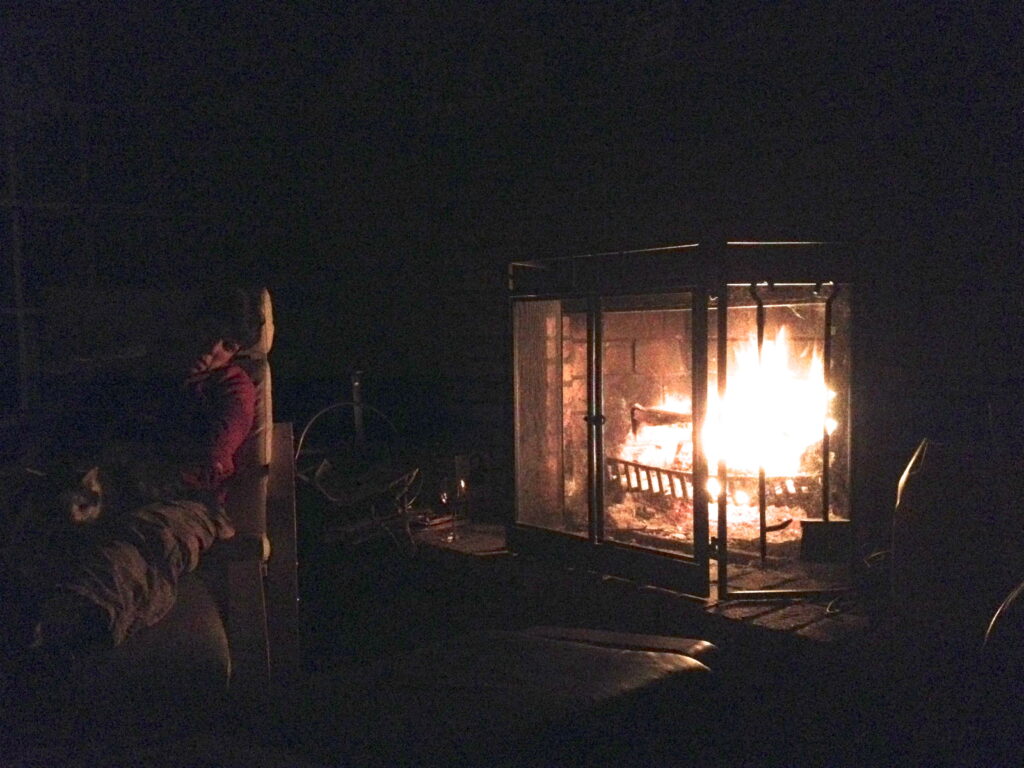 Fires keep you warm when the power goes out in a hurricane… and add carbon dioxide to the atmosphere, increasing the odds of another hurricane.

October 30: Their home was spared, but three trees fell on houses nearby, and another has blocked the end of their street. The airport is flooded, all flights canceled.

This part of Long Island was hit by Hurricane Irene last year; everyone here is already well-rehearsed for surviving a hurricane. Dan’s university has its own power planet, so we can charge our cell phones in his office; and the internet came back there, this evening. Dan’s building has a shower (hot water!), and his lab has a microwave and fridge. It’s become home to many of the families who work here. It’s a festive atmosphere, but with an underlying tension. Classes are canceled (also where Léonie teaches) for the foreseeable future.

November 1: It’s beginning to get chilly inside their house (the thermostat needs electricity) but thankfully it is still above freezing. A roaring fire in the fireplace last night helped. 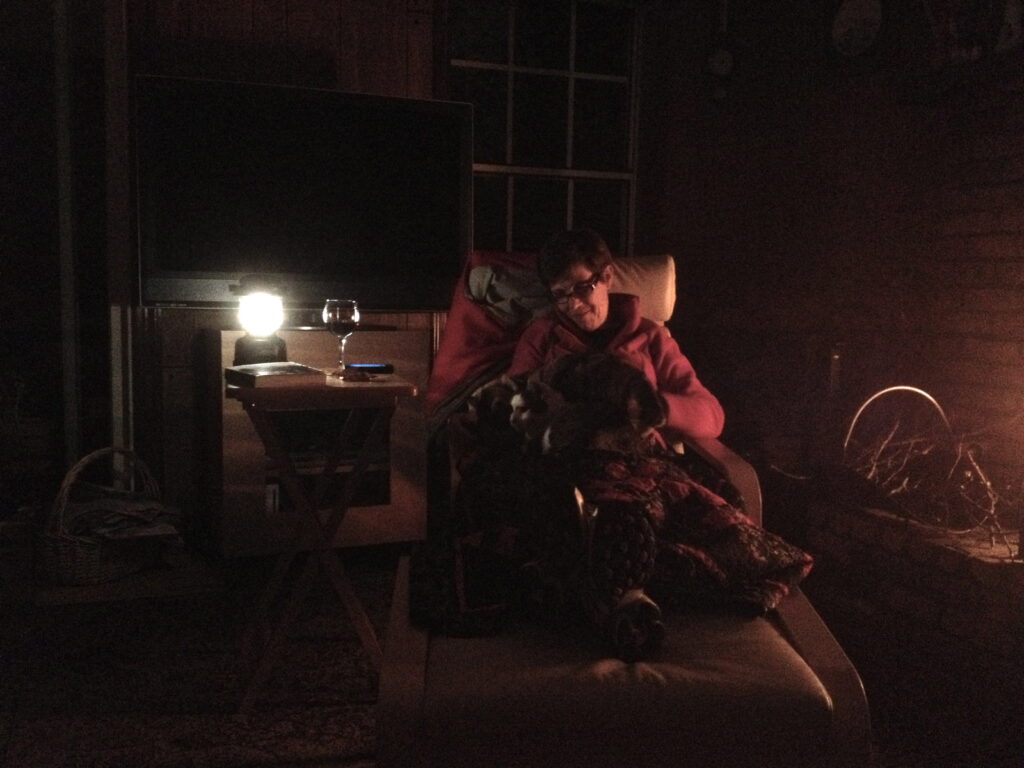 Accessories to stay warm? A fire; a blanket; a lap cat; a glass of wine.

I have finally heard from my sister. They experienced the storm’s center in Toms River, New Jersey, some 140 km southwest of us. Her youngest son rents a house on the barrier island at at Seaside Park; he left with just his dog and his passport, an hour before the storm hit. I’m told that he won’t be able to move back for at least six months as the gas and water lines will have to be completely replaced.

November 3: Dinner by candlelight at the home of friends who have a gas range, and thus can cook! (No candles at our house; my friends have active cats.) A huge tree toppled across their street into their front yard; to reach their door, we had to lift a yellow “crime scene” ribbon stretched across the road.

Most of the traffic signals are still out, and gas stations are either closed or limiting supplies. This makes travel difficult. A few stores are open, we’re in no danger of running out of food, and unlike other places the water supply where we live is safe. So mostly it’s just an extended camping vacation… with no fixed date as to when it will end.

November 6: Parts of the Long Island Railroad are running again, so I could get to JFK airport and catch a roundabout flight back to Rome yesterday. Dan and Léonie e-mail me that their power came back this afternoon, after eight days without. Most of the eight million people affected are slowly getting back to normal, though parts of Staten Island may be without electricity until Christmas.

Dan’s a geologist, so I asked him: did global warming cause this storm? Not directly, he says. This area has always had hurricanes. Sandy was just bad luck: it hit New York during a full Moon, which causes the highest of high tides.

But the melting Greenland ice cap has already raised the sea level by half a foot. The contrast between a warming ocean and the cool autumn upper atmosphere gave extra energy to this storm. And it makes such storms much more likely to occur. It didn’t cause the storm, but it created the climate where the storm could thrive.

Like the nuns used to tell us about “occasions of sin,” we are in a situation we should have avoided. Two centuries dumping carbon dioxide in the atmosphere leads to trouble… as surely as sitting at the bar of a strip club, pretending nothing will happen.

[This past summer I visited friends in San Juan, Puerto Rico, and I have been following their adventures following Hurricane Maria. A month later and most of Puerto Rico is still without power, much without drinking water. My friends at Arecibo have only just gotten back on the internet. If you can, send some help their way.]