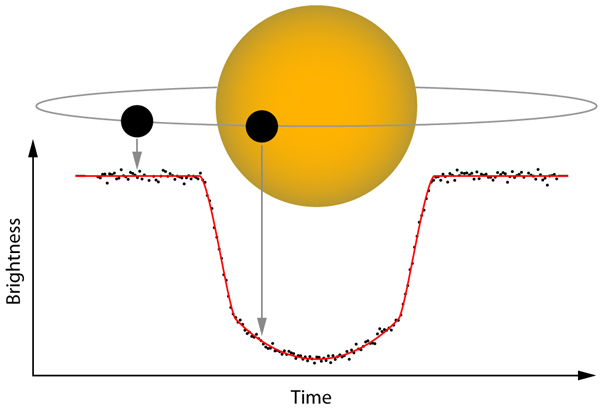 Diagram of how the shadow of a transiting planet or moonlet affects the brightness of the object it is transiting. Courtesy Hawaii Institute for Astronomy. This column first appeared in The Tablet in April, 2009. We ran it on the old Catholic Astronomer blog in April of 2016. This version is slightly updated…

In April, 2009, NASA’s Kepler space telescope sent back its first images of a star field in the constellation Cygnus. Unlike most spacecraft, it’s not a man-made moon orbiting the Earth, but a man-made asteroid following the Earth around the Sun, with a “year” a few weeks longer than Earth’s. Now, from the darkness of its orbit, it has aimed its telescopes at the Milky Way to look for traces of Earth-like planets.

The light that’s not there

The plan was simple. For the next three years (six years, they hoped, if all went well) it would be watching the same star-filled region of the Milky Way, carefully measuring the brightness of every star in its field of view – some 100,000 of them – looking to see if any one of them periodically dims by a hundredth of a percent or less. Such a small, regular change would be just what one would expect if a small planet were crossing the face of that star. In this way planets as small as Earth might be detected.

Notice that we won’t actually be able to see those planets. We will only know they are there by the shadows they cast… a shadow extending hundreds of light years, from the star and planet to our telescope. And, of course, we will only find those systems that by chance are lined up just right so that the planets cross between us and their stars. But by tracing their shadows, we will know that such planets are there; and we’ll learn which of those 100,000 stars will then be worthy of further study.

While the Kepler mission was getting underway, a team of us at the Vatican’s telescope in Arizona in April 2009 were looking for a similar sort of shadow: the trace of a tiny moonlet crossing the face of the dwarf planet Haumea. In this case, we already knew the moonlet exists. It has been seen in telescopes more powerful than ours. What we were trying to learn was the nature of the dwarf planet it is orbiting.

Haumea is only slightly smaller than Pluto, one of a half-dozen known dwarf planets, smaller than planets but bigger than asteroids or comets. But unlike Pluto, Haumea appears to have a very odd shape. Its brightness varies strongly and rapidly, as if the light we see were being reflected off a pinwheeling Rugby ball, two thousand kilometers long and a thousand kilometers wide. But even with the largest telescopes we can’t actually see the shape of Haumea directly.

Instead, being able to trace out the moon’s shadow would help us trace out its shape. Observers all over the world attempted to carefully time the slight dip in Haumea’s brightness seen as the moonlet crossed the dwarf. Each telescope, at slightly different locations on Earth, hoped to see the moonlet from a slightly different angle, and so each observation could trace a slightly different path across Haumea. How long the dip lasted at each place, would tell us how wide Haumea is along that particular path. Combining all the different timings would allow us to map out the overall shape of Haumea.

[Alas, our attempts to see shadows on Haumea were unsuccessful. Indeed, even in the twelve years since this first attempt, even with Hubble, such transits have not been seen. That “shadow” in our data is itself significant; we now realize that the orbits of those moons, on which the prediction for transits were based, are far more complicated than first believed.]

When absence is a proof

Of course, the success of the Kepler mission is well known, with several thousand planets discovered so far.

73  |  Across the Universe: Dramatic Science