The column first ran in The Tablet in August 2013

The Milky Way arched over my head, a swath of light through an inky-black sky streaking from Cassiopeia on the northern horizon, through the cross of Cygnus, to the hook of Scorpius just above the horizon due south. I was on a hilltop in southern Vermont attending this year’s annual convention of amateur telescope makers known as Stellafane. The name, we were told, means “shrine to the stars.” 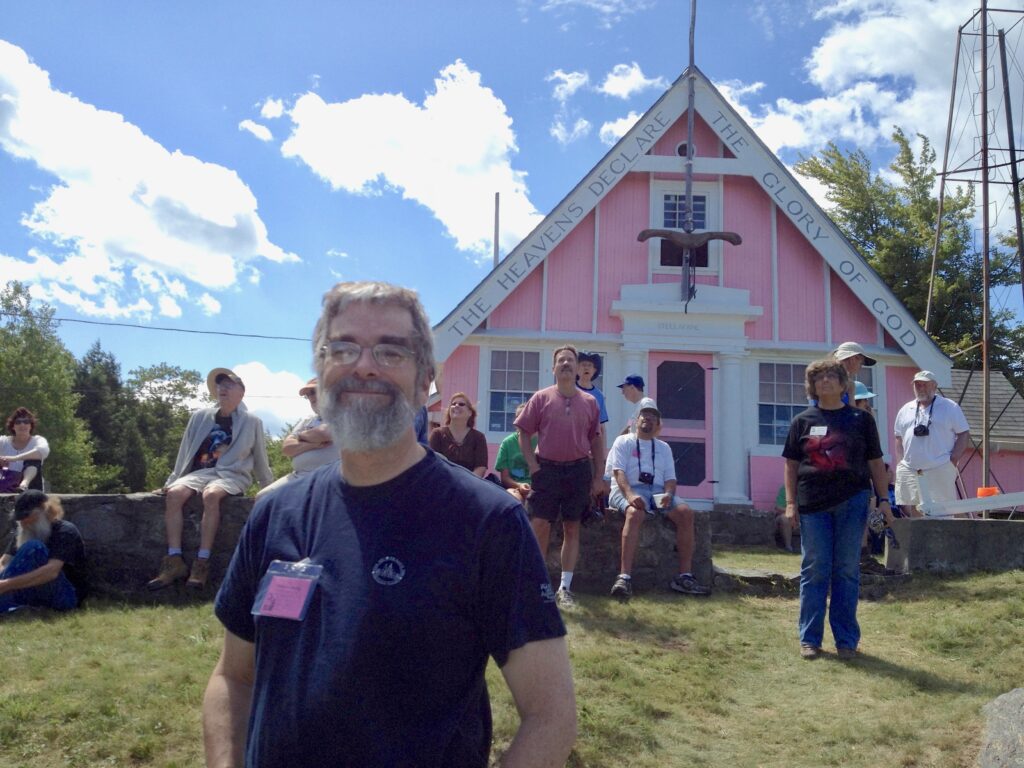 Me at Stellafane, 2012. Note the inscription on the roofline of the clubhouse.

It’s not only the dark skies that attract amateurs to this location. Ninety years ago a group of twenty precision toolmakers in the small mill town of Springfield, Vermont, first gathered to share their knowledge of mirror-making and show off their equipment. In 1923, if you wanted a small telescope to look at the stars you either paid a small fortune or you made it yourself. Grinding a mirror into the parabolic shape that can focus faint starlight into a bright point was both a science and an art, well suited to the skills of the precision toolmakers in Springfield. Within ten years the annual Stellafane group had built a clubhouse and an enclosed observatory; and, thanks to publicity in magazines like Scientific American and Sky and Telescope the annual convention with contests for items like best-optics and best-mountings became world famous. Among the thousand attendees this year I met folks from northern Ireland and Australia.

Over the last thirty years, a small revolution in amateur telescope making, such as elegant mounts that rely on Teflon and springs, or computer-controlled optics fabrication, have dropped the price of amateur telescopes. Almost anyone can afford a ’scope as good as any award-winner of years past. Moreover, modern eyepieces – for example, those developed by Roger Tuthill, who during his lifetime was a regular Stellafane attendee – have meant that what you see in modern amateur telescopes can match the best professional telescopes of the past.

But as our technology has advanced, it has also destroyed the dark skies that visual observers depend on. Even a small telescope on a remote dark site can outperform a monster mirror under typical suburban conditions.

Pope Benedict once used this simple truth to tell a spiritual message: in just the same way that artificial lights blind us to the faint but beautiful lights of starry skies, we lose sight of God in the noise of our daily lives.

Indeed, stargazing teaches many spiritual lessons. Anyone can appreciate the stars; but we need a community of teachers to really understand what we’re seeing, and to learn how to see deeper and further, to know where to find the subtle galaxies and nebulae. Perhaps the “cheap astronomy” of flashy internet images draws us from the deeper satisfaction of a faint object seen live, in a mirror carved by our own hard work and discipline.

On occasion I took a break from my eyepiece to lay back on the ground and absorb the whole dome of the sky overhead. The human eye sees the stars as bright and dark spots on a distant black surface. Only centuries of careful measurements have revealed that the universe is not a simple spangled orb encircling Earth, but a vast emptiness punctuated by rare but brilliant globes of fantastic brightness at even more fantastic distances. In the same way, we tend to see God in simple two dimensions, and our mind reels at the understanding of the length and breadth and depth of him; his power, his majesty, his love.

Astronomy and religion both are at their best when they remind us that there’s more to existence than worrying about what’s for lunch. Painted on the roofline of the Stellafane clubhouse, shrine to the stars, are the words of the psalmist: the heavens declare the glory of God.