This column first ran in The Tablet in February 2013

I traveled to Tucson to measure the fluctuating brightness of some small bodies in the outer solar system using the Vatican’s Advanced Technology Telescope. By how often they brighten and dim, we measure how fast these bodies spin; by how much their brightness changes during these cycles, we get a measure of their irregular shapes. 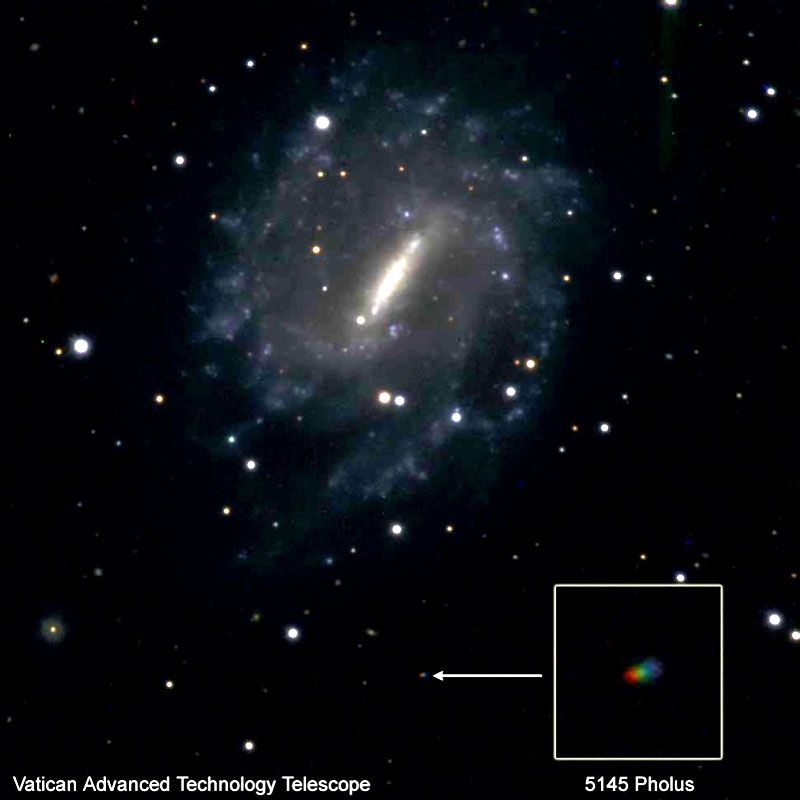 Ignore that gaudy galaxy getting in our way, and notice instead the dots of light, red green blue, marking the passage of the centaur 5145 Pholus through our field of view. The relative brightnesses of the different colors is what we were measuring.

It is not particularly thrilling work. We point the telescope at a given object; take a three-minute exposure with our electronic camera; and then another exposure; and another; and another… These objects typically take about eight hours or more per spin; so we observe one body per night as it rises, crosses the sky, and sets in the west… checking the images for clarity, tweaking the focus, watching the skies to make sure that clouds are not moving in. (We got three clear nights out of five.)

Data in hand, our work is still not done. We must correct each frame for flaws and dust on the image chip, then compare the intensity of the object with that of a nearby constant star, frame by frame, each image providing one dot in a curve tracing out how our object’s brightness varied from moment to moment.

And even knowing that, we still won’t have a full picture of our body. To get a full 3-D sense of its shape we need to measure its brightness fluctuations from at least three different angles. That means, repeating this measurement when the object has moved through at least three different points in its orbit. But since they orbit so far from the Sun, these objects can take many years to move enough for us to get a good view from all sides. Our first data set goes back to the early 1990s; the work we did this month won’t really be useful until another data set can be taken, some ten years from now. It may well be that these data ultimately will be fed into models for the body’s shape made not by us, but by future astronomers who weren’t even born when our first light curves were measured. Astronomers take a long view.

The shape of a small spinning body can help us put limits on how dense and strong it is. That tells us something about how it was made. It’s also useful knowledge if such a body ever finds itself on a collision course with Earth. Another far-distant possibility? Soon after we’d finished our observing run, a fifty-meter asteroid passed less than 20,000 miles from Earth, while a ten-meter meteoriod exploded over a Russian city, injuring thousands.

Our view this trip was distant in another way: for the first time, my colleagues and I were not physically up the mountain with the telescope but in a control room at the University of Arizona, a hundred miles west. This meant we could avoid the four-hour drive up a treacherous mountain road in winter, and we could sleep in our own beds at night. The romance of lonely nights surrounded by pine trees and snow (and thin air) was replaced by the convenience of going out for Mexican food before we started work.

And while we worked, another orbit was coming to a close in Rome. For the second time in my career at the Vatican, I am experiencing a change at the top… without actually being in Rome to witness it. (The funeral of John Paul II and the election of Benedict XVI occurred while I was in Los Angeles doing Jesuit studies leading to my final vows.)

But then, I am an astronomer. Observing things from a distance is what I do. And only time and distance will allow us to really understand the shape of Benedict’s papacy.

(At the time this was written, we did not know who the next Pope would be… I remember coming home from the observing run, about to drop off to sleep at dawn, only to get a startled email from a friend of mine – a science fiction writer, who happens to be Jewish, not Catholic! – telling me that my Pope had resigned.)