Sometimes I write columns for Across the Universe that, for various reasons, I decide not to submit. Here is one that I prepared in 2016 while attending the 2016 General Congregation. I decided to go with last week’s column instead… in part because with the topic below I would either have run short (as here, well below the typical 600 words) or I would have gone way too long… 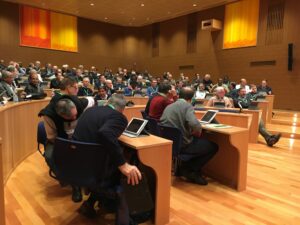 I have been participating in the 36th General Congregation of the Society of Jesus, which finally closed on November 12 [2016]. It was an odd experience… half, six-week-long retreat; half, six-week-long faculty meeting. As you can imagine, I didn’t get a whole lot of science done during that time.

But that’s not to say that I wasn’t thinking about science. It wasn’t particular projects waiting for me back at the office that held my attention, though, but rather the the whole enterprise of being a scientist.

The fact is, for all the endless hours in our meeting hall discussing minutiae of Jesuit governance, the congregation really was a profound religious experience. God was there; God moved in the things we do; God’s presence changed minds, and changed outcomes. How do I fit that into my cosmology of the scientist who expects the world to follow simple predictable patterns of cause and effect? 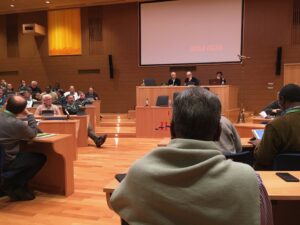 Oh, sure, I can blithely speak of quantum effects where at the tiniest level it’s chance, not causality, that holds sway. But I know the math, I know that by the time you get to the scale of airplanes the odds always are good enough to be reliably predictable, enough for me to get on that plane and fly across an ocean.

And yet, I continued to see God act at the congregation. How does that work?

About twenty years ago a group of theologians and scientists held a series of workshops at the Vatican Observatory, producing a dozen hefty books exploring the subject of God’s action in the universe. I mostly skipped those meetings; it was enough for me to accept that both science and God were true, and not worry too much about the details. 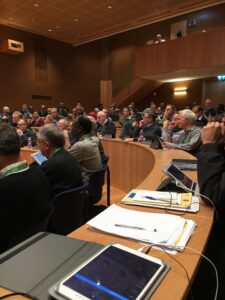 … right. I had a great seat, right on the center aisle! (We were seated alphabetically)

One model would say that our science just describes a limited subset of reality; it can describe the pigments of the Mona Lisa but not her smile. A different model suggests that God is actually behind every quantum choice, expressing at that unpredictable level effects that eventually show up in our observable universe… God, rigging the playing dice that controls the universe.

The trouble with both models is that they assume that our science itself has got it right, and we need to warp our vision of God to fit our vision of science. But as anyone who has studied the history of human thought is well aware, science itself is a moving target, constantly changing.

If anything, it is our understanding of God that has managed somehow to remain constant even as the physical cosmologies we use to understand the universe have advanced from the domed sky of Genesis, to the spheres moved by medieval angels, to those almost-measurable entities called dark matter and dark energy.

Guy Consolmagno SJ is the director of the Vatican Observatory.

15  |  Across the Universe: The Impact of Asteroids