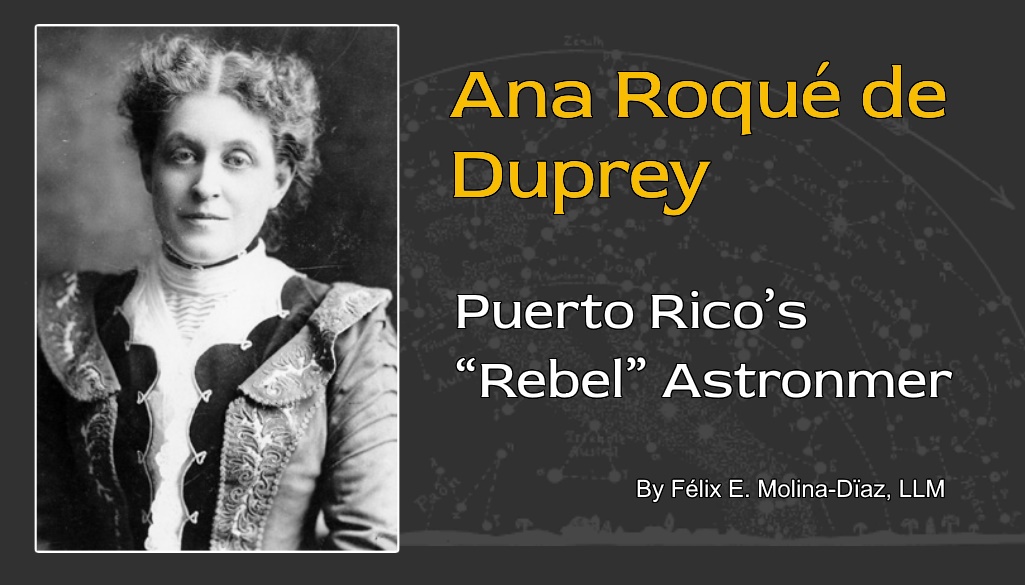 Doña Ana Roqué de Duprey is without a doubt one of the most privileged scientific minds that Puerto Rico has produced throughout its history.

Woman of the 19th century, botanist of the first order, continuator of the work of Dr. Agustin Stahl, astronomer of recognized intellectual solvency at an international level, polyglot, educator as few have existed, politician in the noble sense of the term, possessor of a special religiosity, poet, writer, journalist with an indomitable pen, founder of institutions that marked our history and suffragist respected by all, that was the “Rebel” Doña Ana Roqué de Duprey.

Born to a family of educators in Aguadilla in 1853, she is one of the best hidden and forgotten academic treasures of the Latino and Caribbean community.

It is important to know that Roqué de Duprey wrote his first academic text on geography at the age of thirteen. Text that was later adopted as the official geography book of Puerto Rico by the former Department of Insular Instruction.

Roqué de Duprey is the author of the most complete botanical catalog of species of Puerto Rico” ever written. “Botánica Antillana”, written in spanish and English, contains descriptions and drawings of more than six thousand (6,000) species of plants from Puerto Rico and the other Antilles. The same was never published due to prejudice against women in the 19th and 20th centuries.

Currently, and seeking the historical justice it deserves, said catalog is in the process of being digitized to be used by the general community and the scientific community in particular in Puerto Rico.

As an astronomer, Doña Ana Roqué de Duprey was the first woman to practice the discipline professionally in Puerto Rico as far as we have been able to investigate.

Important are the steps that Roqué de Duprey made in relation to the visit of the first European astronomical commission led by the San Fernando Observatory in Cádiz in 1882, which came to Puerto Rico to see the transit of Venus in front of the Sun from the premises of The Morro Fortress.

She was a distinguished member of the Sociêté Astronomique de France. This institution is a leader in astronomical research in the XIX Century.

The roof of her house in Old San Juan became the improvised observatory in which she gave classes to all the people who were interested in admiring the skies of Puerto Rico.

For Our Rebel, science was the “Divine light” that, if implemented correctly, generated wealth. According to this, science was the “philosopher’s stone” that created gold from the puerile and served as a guide to lead the human being through the mysteries of Nature “but whose beginning and end is God”. (Periódico La Crítica, 1915).

For some reason that has been discussed elsewhere, the history of our people should not be forgotten, nor should its protagonists be ignores.

The legacy of this extraordinary woman and scientist must be known, studied and disseminated for the present generation and those to come.

As Pope Francis recently said, “The people that forgets its past, its roots, has no future. It is a dry nation”

We must remember that “A people without knowledge of their past history, origin and culture is like a tree without roots” (Marcus Garvey)

You can find more information on this topic in the article by Eliván Martínez Mercado of February 23, 2015 published by the Center for Investigative Journalism of Puerto Rico.

I also suggest that you consult the information contained in Ciencia PR especially that pertaining to the recognition that was made to Doña Ana Roqué de Duprey by the White House and President Barak Obama collected on Soundcloud.