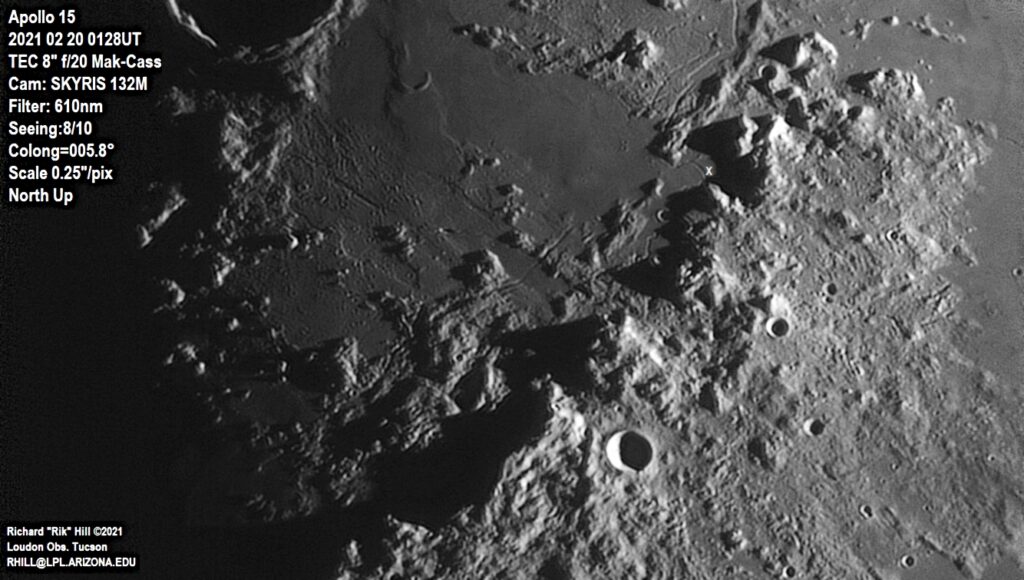 The large set of mountains running roughly diagonal in this image are the northern portion of the Montes Apenninus. The crater below center is Conon (22km dia.) and you can see a small piece of Archimedes at the top left. Between the montes and Archimedes is a smooth area known as Palus Putredinis which I highlighted in an earlier write up. Parallel to the montes on the south side of the palus is a large broad rima, Rima Bradley (134 km long). On the northern side is a series of smaller, thinner rimae roughly parallel to the montes, Rimae Fresnel (94 km long). The ridge just below these rimae ends on the north with Promontorium Fresnel. Next to this ridge is a small crater Santos-Dumont (9 km) looking to be a caldera on a mountain. A look at it in LROC QuickMap shows it to be a relatively young crater on a plateau, that bisects a thin rima. Ducking in and out of the shadows of the montes is another rima with a small crater in the middle, Bela (12km) even though it looks to be smaller than Santos-Dumont in this lighting. That rima is Rima Hadley or “Hadley Rille” and the ‘X’ marks the spot where Apollo 15 touched down in July 1971, 50 years ago last month. Of the three astronauts on that mission David Scott, Alfred Worden and James Irwin only Scott survives at the age of 89.

The big mountain just to the upper left of Conon is Mons Bradley (4200m high) but it’s not the highest. The bright peak to the upper right of the Apollo 15 site is Mons Hadley (4800m ), almost 5 km high! Definitely nose-bleed altitudes!!