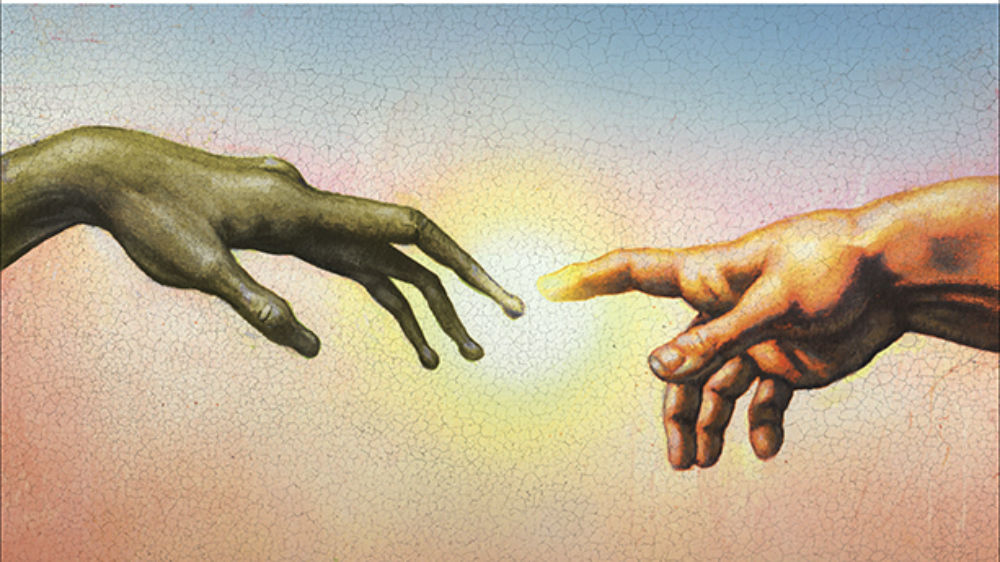 Back in 2015, the Templeton Foundation (who have been very generous to the Vatican Observatory Foundation, including funding our new web site design!) wrote to a number of experts about how theology is interacting with astrobiology, the study of life elsewhere in the universe. Here are their questions, and my responses. It’s never been published before… and my replies are six years old… but I think they’re still valid, and point to a nice place for anyone interested in the question to start looking. Plus, I had room for a wry comment or two!

1. Are you aware of any meta-studies, reports, or other documents which already aim to describe the state of theological reflection on the implications of astrobiology? If so, please identify them and briefly describe their relevance and significance.

The only documents I know of are one-off books or articles by people with a wide range of backgrounds, education, and authority. These are geared to a general audience; in other words they are not meant to represent new research in the topic but rather to summarize the issues as seen today or as seen through history.

The two most important works on the topic that I am aware of are by Thomas O’Meara, Vast Universe (Glazier, 2012)

and David Wilkinson, Science, Religion, and the Search for Extraterrestrial Intelligence

There are a number of shorter articles but I would regard these two books as the primary sources of useful information about the current state of theology on the topic.

2. Which topics from the scientific literature on astrobiology have you drawn from – or definitely plan to draw from – in your own work? Feel free to describe these at a fairly high level. In addition, which topics from the scientific literature are you aware of but not engaged with, at least at this time? Please describe briefly the reasons for your decision not to work in these areas.

My own interest is based on the astrobiological search for life in our own solar system and traces of life-indicators in the spectra of exoplanets. This matches my own interest as a planetary scientist. The parallel thread of astrobiology, the study of the origin of life here on Earth, is something I am much less familiar with, since it involved details of biology and biochemistry that are far afield from my own research (and thus I don’t really know how to evaluate or appreciate them.)

3. Please describe what you would view as a high-level structure of current theological debates on astrobiology – what is an appropriate way of describing major research clusters? Feel free to provide up to several levels of granularity here – so, give a highest-level breakdown of topics, give their most important sub-topics, etc. For each topic, please provide a single term or collection of terms for it – along with a definition, glossary-style – which could easily be used as a search query. Please note which areas you know more about than others. Although we do not want to limit you – provide as much granularity as you want – we would be satisfied with around fifteen to twenty topics/sub-topics/sub-sub-topics/etc.

Surely you are joking. There is no such discipline that I am aware of, much less such subtopics.

Perhaps the deepest value of – and only valid excuse for – contemplating and speculating about life elsewhere in the universe from a religious perspective is that it adds a new dimension to our own understanding what it means to be in a relationship with God. Appreciating God as the Creator of a universe big enough to contain those billions and billions of galaxies and stars makes us realize just how immense God’s infinity must be. Asking what it would take for an “alien” to have something like a “soul” forces us to confront just what we mean when we use that word. Speculating on how Christ’s salvation could apply to other beings is a wonderful way to appreciate anew what that salvation means to us humans.

Note that there is no specifically “Catholic” take on the study of life on other planets. Certainly there are biologists and astronomers interested in the project who are religious (I can name a couple of Catholics in the field who have written textbooks on the topic, for example, Jonathan Lunine at Cornell), and no doubt there are astrobiology labs at universities that are affiliated with the Church, but that does not imply any sort of official Church involvement. The only scientific institute run by the Vatican is the Vatican Observatory, and as it happens none of us at the moment are biologists.

It’s typical, I suspect, that even Fr. Lucan Mix, an Episcopal priest who is also a biologist, has written a popular book on astrobiology, Life in Space, ( http://www.hup.harvard.edu/catalog.php?isbn=9780674033214 ) which deals essentially with the biology, not the theology, of the topic.

The one member of the Vatican Observatory who was best placed to pursue such a study, Fr. Bill Stoeger, sadly passed away in 2014. He was an editor on the extensive series published with the CTNS in Berkeley on Divine Action in the World, based on a series of conferences held in Castel Gandolfo from the late 1980s until the mid 2000’s. It is notable that the topic of extraterrestrial life was never raised in these conferences (judging from the table of contents of the proceedings.) And the closest I know that Bill ever treated the subject was in his (favorable) review of O’Meara’s book.

4. Please identify the major centers of influence in theological reflection on astrobiology, including: distinguished authors, seminal papers, journals/conferences and departments/institutions. Although we do not want to limit you – provide as much detail as you want – we would be satisfied with ten to twenty names across the categories defined above.

I have asked my friends in theology who might know (including emails to O’Meara and Wilkinson), they have asked their friends, etc. etc.

To my knowledge there are no theological debates on astrobiology. There are merely idle speculations in passing. To quote Dr. Grace Wolf-Chase at the Adler Planetarium in Chicago, who consults on science issues for the Evangelical Lutheran Church in America, “My impression is that there is a lot of “scattered” work going on in this area.”

The best outline of that work is to be found in Wilkinson’s book. When I wrote to David, he noted that he is also being consulted by you on this topic, so I can’t add anything that you won’t already have heard from him!

One noted place where such work could take place (but I don’t think is, at the moment) is the Center for Theology and the Natural Sciences, Berkeley. Ted Peters has done some informal work in this area, including a widely-publicized survey of attitudes of people of various religions towards extraterrestrials. I do not believe he is actively pursuing a research program in this area himself.

O’Meara wrote me an email with the following suggested people:

Michael Crowe, Notre Dame.   And he would have suggestions.

Jacques Arnould, on the staff of Centre [National] d’Etudes Spatiales, Paris/Toulouse; lecture in US and France; has publications in French and English.  He is editing a volume on this topic.

Prof. Armin Kreiner, Univ. of Munich.  He has a book out on this in German from Herder.  I will see him in a few weeks, and see who he hangs out with..

(Interestingly, he and I both did our doctorates — he twenty years after me — at Munich with Heinrich Fries.  An ET must have spiked the beer]

Fr. Paul Gabor SJ, an astronomer at the Vatican Observatory Research Group in Tucson who works in astrobiology and who studied that field in France, also noted the work of Jacque Arnould, pointing out that he holds a position as a theologian at CNES — see http://fr.wikipedia.org/wiki/Jacques_Arnould

Fr. Gabor mentioned as well the Dominican Father Jean-Michel Maldame (see http://fr.wikipedia.org/wiki/Jean-Michel_Maldamé ). Paul warns me that Fr. Maldame is a “difficult character” and that he and Arnould do not get along well at all!

5. For the major research clusters with which you are most familiar, please assess those where you see the most promising and least explored opportunities for advancing breakthrough theological reflection on the implications of astrobiology. Please provide as much information as you’d like, but we would be satisfied with detailed discussion of 5-10 clusters and questions.

In the absence of such clusters, this question is premature.

6. Lastly, please reflect on what you see as the major obstacles to theologians working out the implications of astrobiological research with the attention and rigor they deserve. Consider the range of potential obstacles, which may include: methodologies, interdisciplinary collaboration, data sharing, technology, perceptions and beliefs.

One issue is the “giggle” factor. It is tough to take seriously a field that has such dubious antecedents as pulp science fiction. Both theology and astrobiology share the difficulty that they are attempts to study a subject that many people don’t even believe exists; to combine them, simply compounds the incredulity associated with the field.

That’s why I think it is important to frame the theological study of extraterrestrial life in terms that have a visible relevance to what is already going on in theology, and which addresses a question that is already alive in the faith community as a whole.

The one question that I encounter, over and over, in my popular lectures on this topic is: how does the possibility of ET life or intelligence alter our understanding of the nature of original sin and the meaning of salvation? Is original sin something that affected all intelligent beings? Is there a sort of “cosmic Adam” predating even life on Earth? Is Jesus Christ’s redemptive sacrifice sufficient for the whole Universe? Would there be a parallel history of salvation on other planets?

The late Ernan McMullin, a priest and philosophy professor at Notre Dame (with a background in physics), discussed the possible impact on Christian theology of discovering extraterrestrials, and (as quoted by Stephen J. Dick) he concluded only that it would certainly inspire theologians to develop new ways of thinking about topics like original sin, the immortality of the soul, and the meaning of Christ’s redemptive act. But, as he pointed out, there is already a voluminous literature, and hardly a consensus, on these points among theologians even today, without ETs!

He opined that it would “certainly inspire” such discussions; but I do not yet see those discussions occurring. Yet, in the mind of the general public, it is a question that already is arising even before the ETs are found, simply from the perceived inevitability of their existence.

To me, this is a clear and useful way of engaging the theology of extraterrestrials into a debate that is already ongoing. Any modern theory of original sin should be capable of dealing with the nature and need of redemption involving intelligent beings from somewhere other than Earth. The mere possibility of such ETs could serve as a very useful constraint from which new theological insights could be found within the realm of current theological debates.