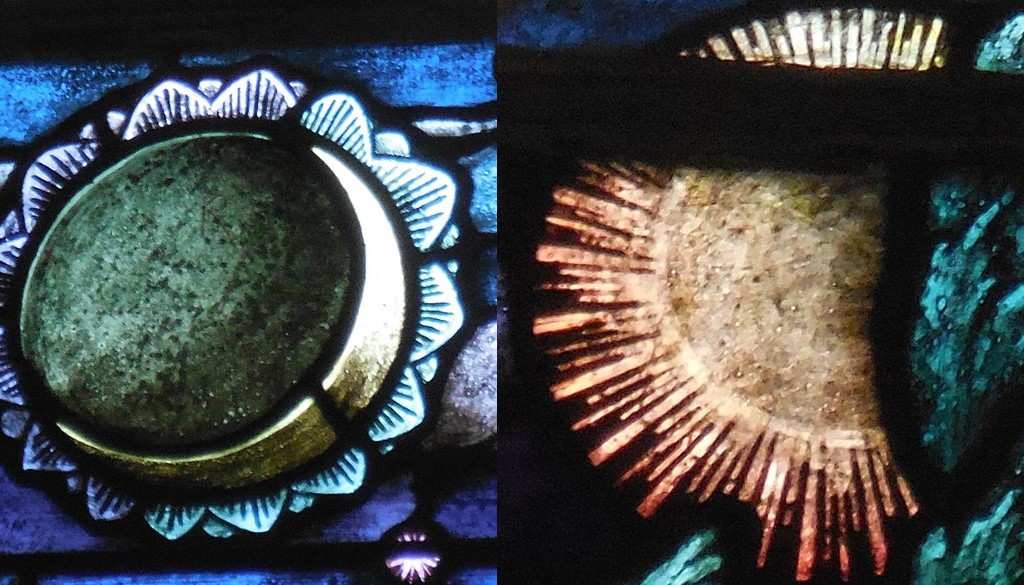 There is some interesting astronomical imagery in the oldest Dominican religious house in the United States.  St. Rose Proto-Priory and Church were established in 1806 a few miles outside of Springfield, Kentucky.  According to the St. Rose web page, St. Rose is “the oldest standing structure west of the Alleghenies still in use as a church”, although not in original form (in 1855 the original 1806 structure was expanded; the original structure is what is now the sanctuary of the church).

Of course this old church is a place of much history.  English Dominicans, spearheaded by Edward Fenwick, founded St. Rose.  Bishop John Carroll (who in 1789 became the first U.S. bishop—of Baltimore) offered to let the Dominicans (O.P.’s), who were looking to come to the U.S., set up shop in Kentucky.  It is possible that Carroll sent them to Kentucky to make sure that they were not in competition with the Jesuits (S.J.’s) at Georgetown in Maryland.  The friars promptly established at St. Rose a “college” for boys and young men.  The college, dedicated to St. Thomas Aquinas, was the first U.S. Catholic educational institution west of the Alleghenies, but it did not last more than a few decades.  St. Rose is also the site of the unmarked grave of Louis Sansbury, who has been featured here at Sacred Space Astronomy (click here for that).

The astronomical imagery is in two of the windows of St. Rose.  One window depicts the death of Jesus on the cross.  It includes an unusual image of a dimmed sun.  This is probably in reference to the statements in the Gospels that Jesus died at mid-day, at which time the land grew dark for three hours.  An interesting thing about the window is that the sky is darkest near the sun.  Toward the horizon, the sky is lighter.  Perhaps the artist had seen a total solar eclipse, in which the distant sky, not being in the totality of the moon’s shadow, is brighter.  Of course, the darkening of the sky at the crucifixion was not an eclipse, because the moon would have been near full (the crucifixion occurring near Passover, which is on a full moon), but the artist may have used the idea.

The other window depicts Jesus crowning Mary as Queen of Heaven.  It shows both a crescent moon and stars.  The moon image is particularly interesting, because it seems that the artist wanted to illustrate the moon’s “primary and secondary light”, that is, the moon illuminated by both the sun and the Earth.

The crescent of the moon is of course that portion directly lit up by the sun.  But when the moon is crescent, the rest of it is also visibly lit up by “Earthshine”—light from the Earth.  The artist who made the window shows this in a rather remarkable fashion.

What is more, the artist also illustrates some of the interesting properties of the Earthshine.  The Earthshine is often seen to be more intense on the side of the moon opposite the crescent; some observers even see that opposite edge as having a distinct glow.  These are both seen in the St. Rose Coronation Window.  The dark side of the moon in the coronation window clearly brightens with increasing distance from the crescent (white arrows, above), and there is a very distinct edge glow (red arrows, above).

That is pretty cool!  There is some interesting astronomical and Church history in the Earthshine phenomena depicted in that window.  The edge glow and other Earthshine phenomena were at one time taken as an argument against the whole idea of Earthshine.  For example, Fr. Christoph Scheiner, S.J. (not O.P.) and his student Johann Georg Locher argued in their 1614 book Mathematical Disquisitions (which I translated—click here for it!) that these phenomena showed that the moon was mildly translucent; they thought the “secondary light of the moon” was not caused by Earthshine (as Galileo had been arguing) but instead came from sunlight penetrating through the moon.  They argued that crystal balls showed the same behavior.  This of course also served to counter Galileo’s argument that the moon was Earth-like.

The phenomena of edge glow and overall brightening across the dark face of the moon have been recently discussed by Bob King at Sky & Telescope magazine (click here for that).  He has argued that they are caused by certain known peculiarities of human vision.  They are not real—he could see the phenomena, but could not photograph them.  King learned about the phenomena from this web site, by the way.

I wonder who that artist was?  (There’s another research project!)