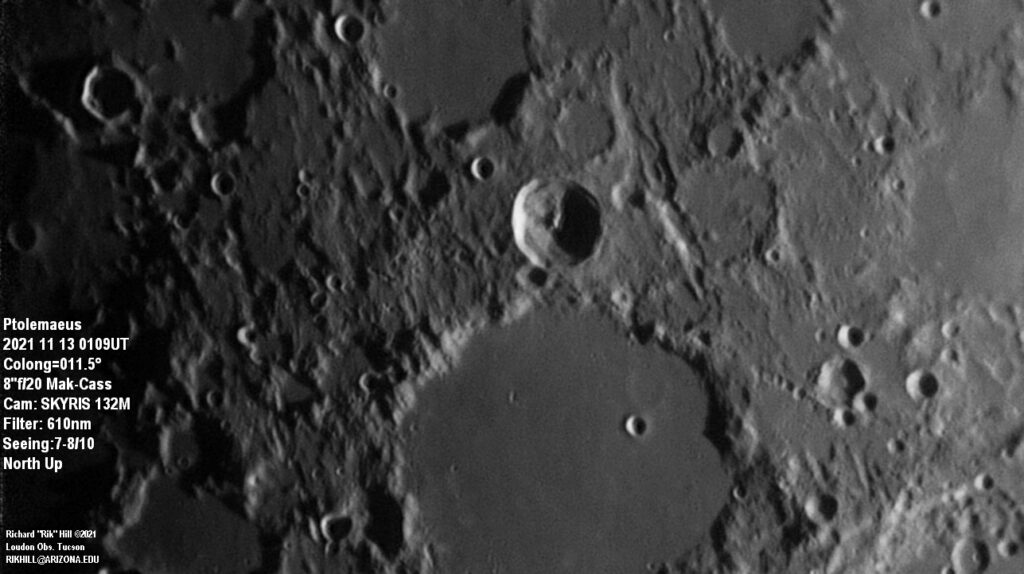 The big crater in the lower center is Ptolemaeus (dia. 158km) with the shallow saucer-like interior craters well shown and the small Ammonius (9km) on the east side floor, which was called Lyot when I was a beginning amateur astronomer. That name has since been given to a crater near Mare Australe on the east limb. This is the greatest of the near side walled plains and a young, sharp-eyed observer might just make out Ptolemaeus when it’s on the terminator. Alas, my old eyes cannot any longer. Above Ptolemaeus is the slightly younger Herschel (43km) and above Herschel is Sporer (29km). Further north is the smaller walled plain, Flammarion (77km) To the right of Sporer is a great gash in the lunar surface some 80-90km long and 15km wide at it’s widest. This is Vallis Gyldén (unofficial) and it cuts off the western edge of the shallow Gyldén crater (49km) to the right of it. If you look carefully you will see many less obvious parallel valleys all over the upper half of this image especially to the left. These were all carved out in seconds by the ejecta thrown out during the Imbrium impact. How much fun would it have been to observe that through a telescope at our relatively safe distance of 380,000km! Of course the Earth was undoubtedly well splattered by the debris from this event. Wish I had a piece of that!

To the right of Gyldén is the large flat floored crater Hipparchus (155km) and above is most of Reaumur (54km). Lastly, in the upper left corner is the crater LaLande (26km). A very interesting region I have enjoyed since my early days with a 2.4″ Tasco refractor!