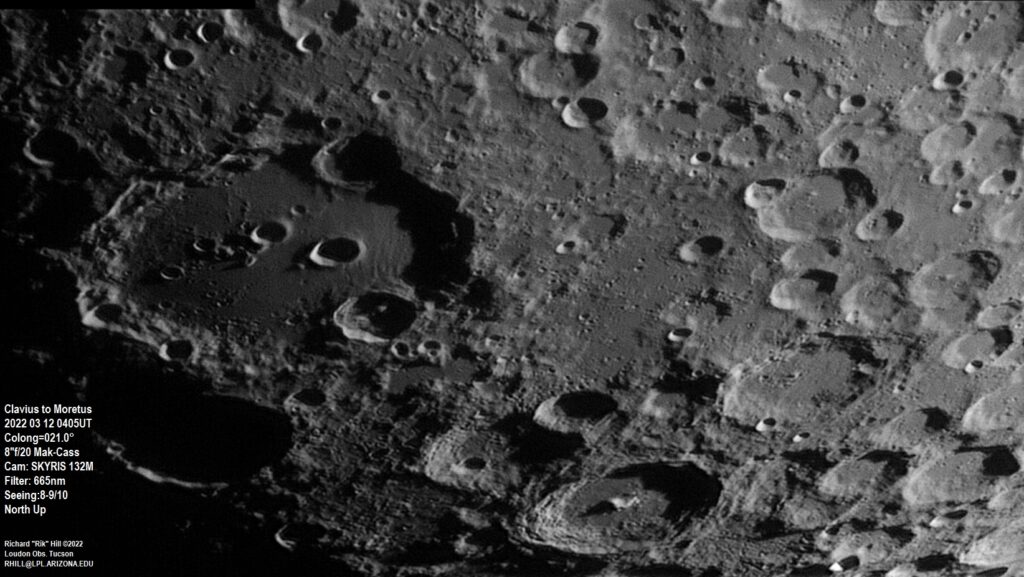 The monster crater on the left side is the 231km diameter Clavius, one of the larger craters on the nearside of the Moon. This crater is named after Christopher Clavius a 16th-17th century Jesuit mathematician and astronomer with the Vatican commission that accepted the proposed Gregorian calendar. He was one of the first to accept Galileo’s astronomical observations with his new telescope though he doubted the reality of mountains on the Moon. Now he is part of that Moon! Science fiction aficionados may recognize this crater from 2001 A Space Odyssey as the location of the obelisk.

Clavius has a fabulous arc of smaller craters on its floor starting with Rutherfurd (56km) on the bottom wall of Clavius up to Clavius-D (28km) above it, then farther on is Clavius-C (21km) and next is Clavius-N (13km) ending with Clavius-J (12km). This distinctive arc of craters makes Clavius very identifiable. Notice the radial streaks of impact ejecta from Rutherfurd across the floor of the great crater. Also notice the small piece of a flat ridge catching the first sunlight just to the right of Rutherfurd and next to it on the Clavius crater wall is an odd little wisp that is a breach in the wall itself as seen on the LROC QuickMap. Below Clavius is the shadow filled Blancanus and further below is the spectacular crater Moretus with its beautifully terraced walls and clear central peak, very like Tycho just north of Clavius.

Above left of Moretus is Gruemberger (97km) and to the right of that is Cysatus (51km). Then to the right of Moretus is Curtius (99km). North of Curtius, just above the mid-line of the image, is the flat floored crater Zach (73km). Above right of Zach is a curious gathering of merged and flooded craters. It’s not named but is still fascinating and intricate in detail. One of those unnamed treasure you can find all over the Moon!