South and east of Posidonius is the crater Romer (41km dia.) seen here at the top of this image with starkly terraced walls and an off center peak on its floor. It’s a young crater and its shape is strongly affected by the topography it was created in. Twin 12km craters below it are Brewster on the left and a little lower on the right is Franck. These both sit in the western reaches of Sinus Amoris with Mons Miraldi, a round mound on the southern shore of the Sinus just north of the low walled crater Miraldi (41km). Moving further south is the crater Gardner (19km) and to its west (left) is the flat floored Vitruvius (31km) half in shadow. South and west of Vitruvius is a smaller crater, Dawes (19km) with an interesting set of ridges on the east side of the crater, followed by Plinius (44km) with Rimae Plinius north and Promontorium Archerusiz next to it.

Notice north and west of Vitruvius there are four similar mountain peaks in a row all catching the early morning sunlight. They mark the location of the Apollo 17 landing site marked here with a “O”. It is one of the easiest Apollo landing sites to find and once you learn it, Taurus-Littrow will always stand out. The “O” sits in Taurus-Littrow Valley with South Massif being the sunlit mountain to the south and the dimmer light just north of the “O” is North Massif. The little dot to the lower right of the “O” is Bear Mountain named by Harrison Schmidt after a mountain near his hometown in Silver City, New Mexico. Details can be seen in images taken from overhead at the URL: www.lpi.usra.edu/lunar/missions/apollo/apollo_17/landing_site/. All the EVAs and the 37km of driving around in the “Moon Buggy” was done inside that circle and included the most time of any crew on the lunar surface collecting 110.4 Kg of surface samples.

North of the landing site is the flat floored teardrop shaped crater Littrow (19km) and to the left is a field of rimae called Catena Littrow with the small crater Clerke (7km) between them. The rimae are graben-like and therefore fairly wide, about 2km on average. Going further north, following the wrinkle ridge or dorsa that leads out of the Catena we come nearly full circle with the embayment Le Monnier (63km) a very distinctive feature. 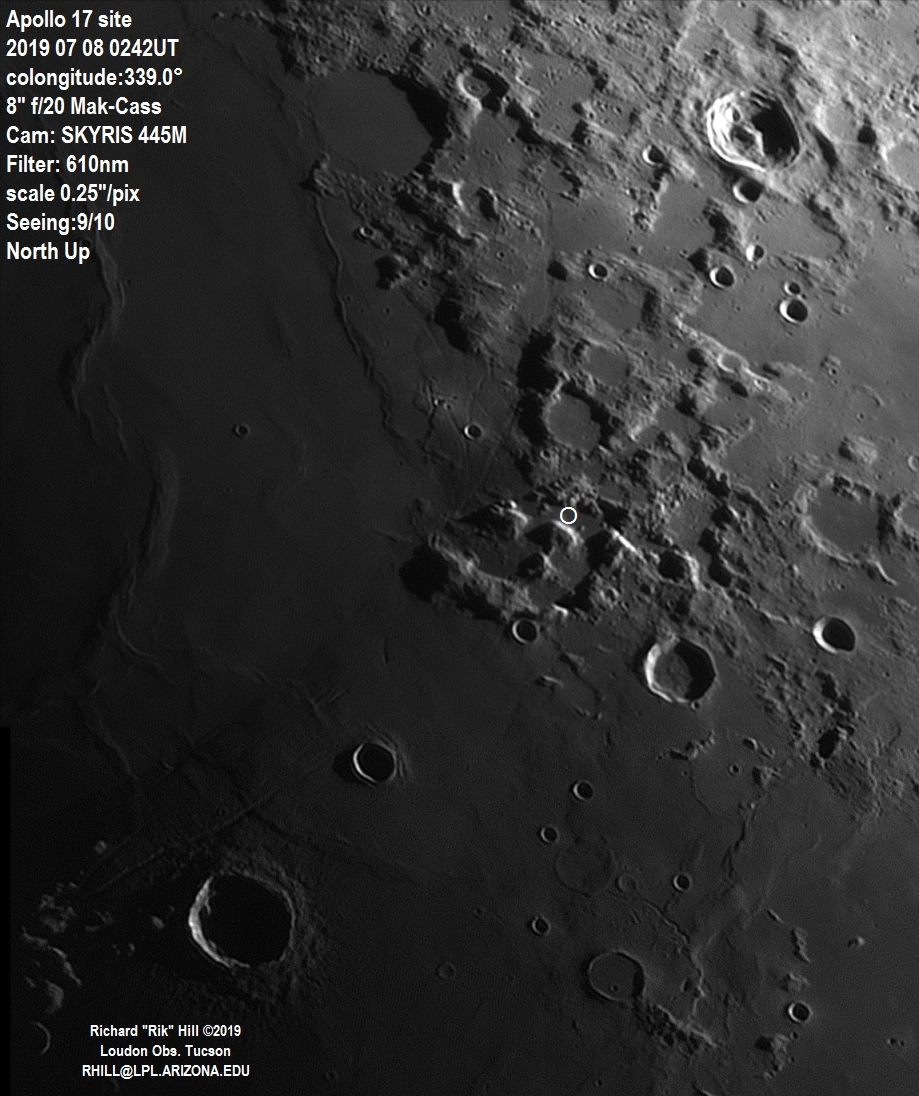