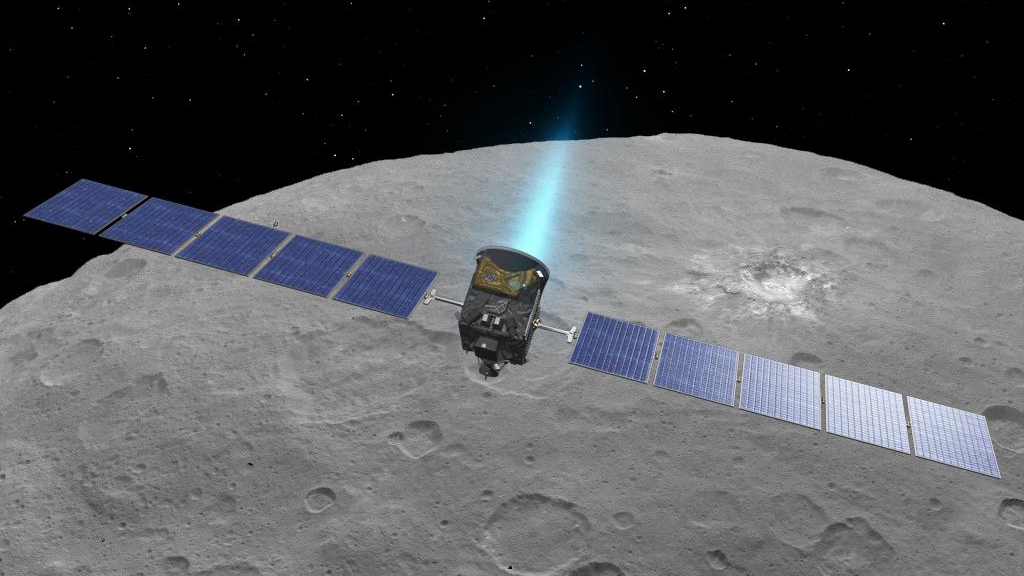 NASA has authorized a second extension of the Dawn mission at Ceres, the largest object in the asteroid belt between Mars and Jupiter. During this extension, the spacecraft will descend to lower altitudes than ever before at the dwarf planet, which it has been orbiting since March 2015. The spacecraft will continue at Ceres for the remainder of its science investigation and will remain in a stable orbit indefinitely after its hydrazine fuel runs out.

The Dawn flight team is studying ways to maneuver Dawn into a new elliptical orbit, which may take the spacecraft to less than 120 miles (200 kilometers) from the surface of Ceres at closest approach. Previously, Dawn’s lowest altitude was 240 miles (385 kilometers).

A priority of the second Ceres mission extension is collecting data with Dawn’s gamma ray and neutron spectrometer, which measures the number and energy of gamma rays and neutrons. This information is important for understanding the composition of Ceres’ uppermost layer and how much ice it contains.

The Gamma Ray and Neutron Detector (GRaND) instrument on the Dawn spacecraft allows researchers to learn about the composition of dwarf planet Ceres by studying energy and neutrons that emanate from it. Credit: NASA/JPL-Caltech

The spacecraft also will take visible-light images of Ceres’ surface geology with its camera, as well as measurements of Ceres’ mineralogy with its visible and infrared mapping spectrometer.

The extended mission at Ceres additionally allows Dawn to be in orbit while the dwarf planet goes through perihelion, its closest approach to the Sun, which will occur in April 2018. At closer proximity to the Sun, more ice on Ceres’ surface may turn to water vapor, which may in turn contribute to the weak transient atmosphere detected by the European Space Agency’s Herschel Space Observatory before Dawn’s arrival. Building on Dawn’s findings, the team has hypothesized that water vapor may be produced in part from energetic particles from the Sun interacting with ice in Ceres’ shallow surface.Scientists will combine data from ground-based observatories with Dawn’s observations to further study these phenomena as Ceres approaches perihelion.

The Dawn team is currently refining its plans for this next and final chapter of the mission. Because of its commitment to protect Ceres from Earthly contamination, Dawn will not land or crash into Ceres. Instead, it will carry out as much science as it can in its final planned orbit, where it will stay even after it can no longer communicate with Earth. Mission planners estimate the spacecraft can continue operating until the second half of 2018.

Dawn is the only mission ever to orbit two extraterrestrial targets. It orbited giant asteroid Vesta for 14 months from 2011 to 2012, then continued on to Ceres, where it has been in orbit since March 2015.

More information about Dawn is available at: https://www.nasa.gov/dawn  and  https://dawn.jpl.nasa.gov

NASA’s Dawn spacecraft has revealed many landslides on Ceres, which researchers interpret to have been shaped by a significant amount of water ice. Image credit: NASA/JPL-Caltech/UCLA/MPS/DLR/IDA