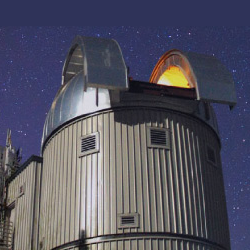 The Vatican Advanced Technology Telescope, which the VOF (and this blog site) supports. The opening in the dome is where large coins are to be inserted…

In a previous post, I noted that the Vatican Observatory Foundation (which sponsors this blog) has to raise about $800,000 a year to cover its commitments, and at the moment we are running very much behind. On the order of $300,000 a year behind, to be exact. That’s… distressing.

What do we plan to do about it? Lots of things, but one in particular concerns you, the readers of this blog.

The Catholic Astronomer has been around for about three years, and every year our readership is doubled and our support has likewise increased.

Many of our paid supporters actually pledge more than those amounts, but taking them at face value means that we raise $10,680 per year from the Pleiades folks, $9600 per year from the Hercules folks, and another $9600 a year from the Andromeda folks. (It’s been the case over several years that the amounts raised in these three categories are almost, if not exactly, identical. Fun coincidence.) That comes to about $30,000 per year.

We need to raise ten times as much. Do you see where I am going?