(A column from The Tablet, first published in March, 2004)

On the other side of Neptune live the Trans-Neptunian Objects, or TNOs. They are worlds so faint that to measure their colors, we use a mirror nearly two meters across to gather their light, which we focus into a spot of only a few hundreds of a millimeter, collecting it with an ultra-sensitive electronic chip, over a five-minute time exposure. They move – more than five minutes and the spot turns into a streak. But take enough exposures over a few hours and you can plot their motions against the background stars and galaxies. 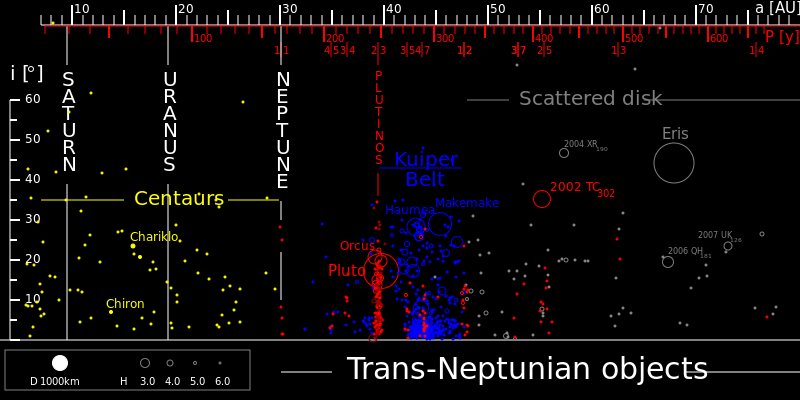 The TNOs are thought to be the home of a class of comets, and they may represent material that’s been kept in “deep freeze” since the solar system was first formed. Though theorized about for years, it’s only in the last decade that new telescopes, more sensitive detectors, and a crew of patient observers have begun to discover them. To date, more than 500 such objects have been found.

On February 20, astronomers Mike Brown, Dave Rabinowitz, and Chad Trujillo added one more to the list. It’s designated 2004DW (a code indicating when it was discovered), while awaiting the approval of a more conventional name.

Once we know where a TNO can be found, we can look for it in old, archived images. This particular body was found in Sky Survey plates going back to 1951. From that information, it was possible to work out its orbit, including how far away it is from us now. This distance, and the amount of light it delivers to the telescope, tells us its intrinsic brightness. And it turns out that 2004DW was brighter (corrected for its distance) than any previously known TNO. Assuming all these bodies are equally efficient at reflecting light, this would imply that 2004DW was the biggest TNO ever seen.

But its reign as the largest TNO was short lived.

On March 15, the same team announced the details of another object, first seen a few months earlier, 2003VB12. Its discoverers propose to name it Sedna, after the Inuit sea goddess. The motion of this object was surprisingly slow, implying that it is located extremely far away: some 76 times the distance from the Sun to the Earth. That is nearly twice as far away as any previously-seen solar system object. From there, the Sun itself would look like a pinhead.

The fact that we can see it at all suggests that it must be quite large. Estimates of its diameter (which depend on guessing its intrinsic reflectivity) range from 1700 km up to 2300 kilometers, which would make it as big as the planet Pluto.

So, is this a new planet?

As far away as it is from us now, Sedna is actually at the closest point of its orbit. Its path is extremely eccentric, like that of a comet, spending most of its life more than ten times farther away from us. That hardly sounds like a well-behaved planet.

And besides, while 2000 km might look large compared to a comet, that’s still smaller than any planet. Plus, it is probably just one example, the first seen, of a whole population of similar bodies. Undoubtedly larger ones are out there, waiting to be found.

Of course, many of those same arguments could be said about Pluto itself. But previous efforts to “downgrade” Pluto have led to a storm of outrage. Schoolchildren especially identify strongly with a planet that’s little, eccentric, and just hanging on at the edge of the solar system. It seems churlish to let the bigger planets bully the little guy out of its status.

The official arbiter of such issues is the International Astronomical Union (IAU). Among other services, it comes up with common astronomical definitions so that we can all speak the same scientific language. For example, the IAU defines the zero-longitude of each planet, and approves the names of features on those planets. But to date, the IAU has never officially defined just what a planet is.

The Vatican is one of the nations represented in the IAU and Vatican astronomers currently serve as two of the fifty-one commission presidents. I’m one of them. And in light of these these recent TNO discoveries, I’ve been put on a working group to come up with a way to define a planet. The definition may be harder to find than the planet.

How does one define a planet?

We could say that planets are objects that share a common formation process. That would help us to solve just how they were formed – and thus define which ones are planets! Well, perhaps not: unlike a planet’s orbit, our definition should be neither circular nor eccentric.

Size alone would certainly work against Pluto. The Earth’s diameter at nearly 12,800 km is more than five times Pluto’s, and even little Mercury (the next smallest planet) is twice Pluto’s diameter. (Seven moons, including Earth’s, have larger diameters than Pluto as well.) Remember that volume goes as the diameter cubed, and icy Pluto is less dense than these planets; Mercury has twenty times Pluto’s mass, and Earth is five hundred times more massive. Yet even Pluto appears to be much bigger than any other object in its immediate neighborhood. Should the criterion be relative size? Or perhaps we’ll just have to give Pluto honorary planet status, for historical (or sentimental) reasons. 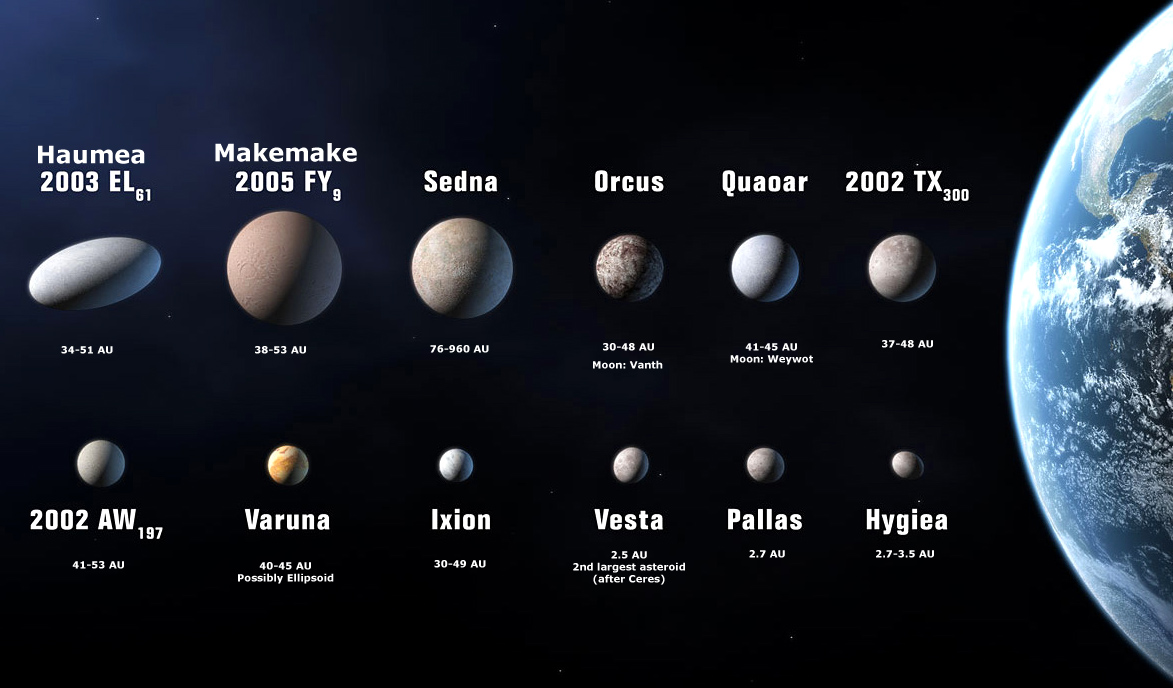 It may seem, at first, that such a definition is arbitrary and of no scientific importance; we’ve lived this long without one. But in fact nomenclature has a powerful effect in many fields. Much of geology and biology gets its start with the classification of species. From classifications, one can separate general trends from random variations, the “essential” from the “accidental.”

Indeed, the words one uses can often define the way one thinks and behaves. What kind of relationship constitutes a “marriage”? Are the English Europeans? Wars have been fought over less. This defining and sorting is the kind of thing the human mind does all the time, but it’s no trivial task. It’s a challenge to design a computer artificial intelligence that can see a room full of furniture and identify the chairs.

Indeed, classifying and naming seems to be a particularly Personal activity. Naming the animals was the first activity attributed to Adam; sorting sheep from goats was one image Jesus used for Divine action. The ability to sort different objects into common pools is one way gain a handle on what those objects are. In the process of making a definition of a planet, we’ll have to look very deeply at just what a planet is. 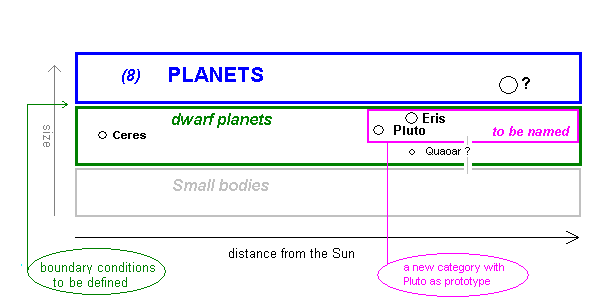 Illustration of the final definition, as passed on 24 August 2006 under the Resolution 5A of the 26th General Assembly

Updates
As of 19 Mar. 2015, there are 1354 objects on the Minor Planet Center’s List Of Transneptunian Objects.

This post has been updated to reflect the 2006 IAU decision on the definition of a planet – BobT.

4  |  Encore: On Seeing the Great Wall of China from the Moon