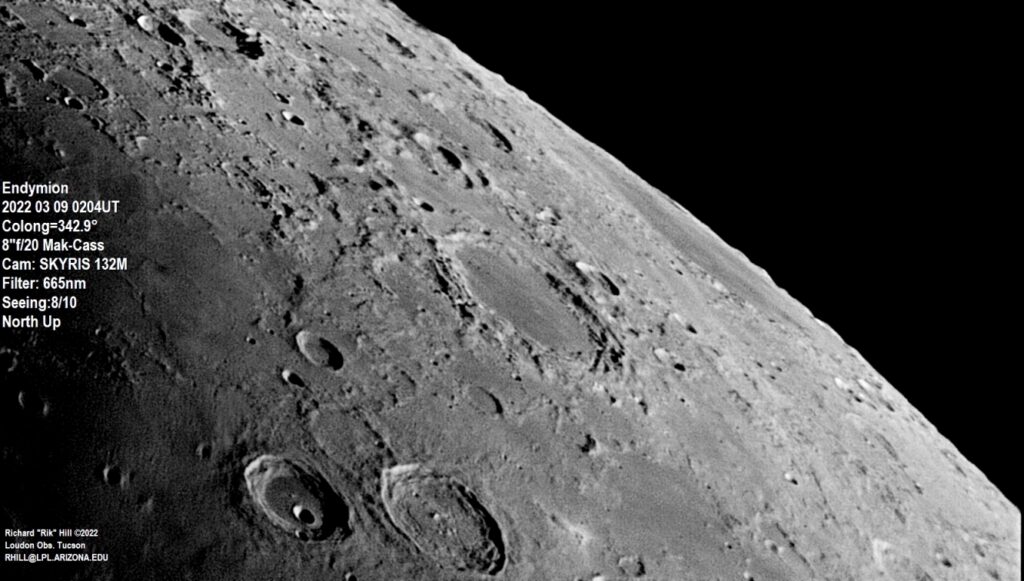 The center of this image is dominated by the large flat floored crater Endymion (129km dia.) one of the earlier features you can identify only 3 days after new moon. Its dark floor helps in the identification. Down below are two equally familliar craters, Atlas (90km) on the right and Hercules (71km) on the left with the nice secondary crater Hercules G (17km) on its floor. Just above these two craters are the easternmost shores of Mare Frigoris,

Beyond Endymion near the limb is the large flat region that is Mare Humboldtianum but beyond the Mare is the limb of the moon and it’s not a sharp curve. It’s quite irregular and rough. Those are the huge peaks on the far side of the Mare, over the lunar horizon. As a kid in the early 1960s, armed with my 2.4″ Tasco refractor, I used to love to look for these irregularities to the limb and when I saw ones of a shallow “W” shape I’d fancy that I was seeing the profile of some large crater. Maybe yes, likely no. Moving to the north end of the Mare we see more irregularities likely the high crater walls of Bel’kovich A and B on the farside of the Mare.

You can explore features like these by using the Gazetteer of Planetary Nomenclature (planetarynames.wr.usgs.gov/Page/Moon1to1MAtlas) but you’ll have to be patient because there’s a lot of hunting around you need to do identifying known feature to find the unknown.