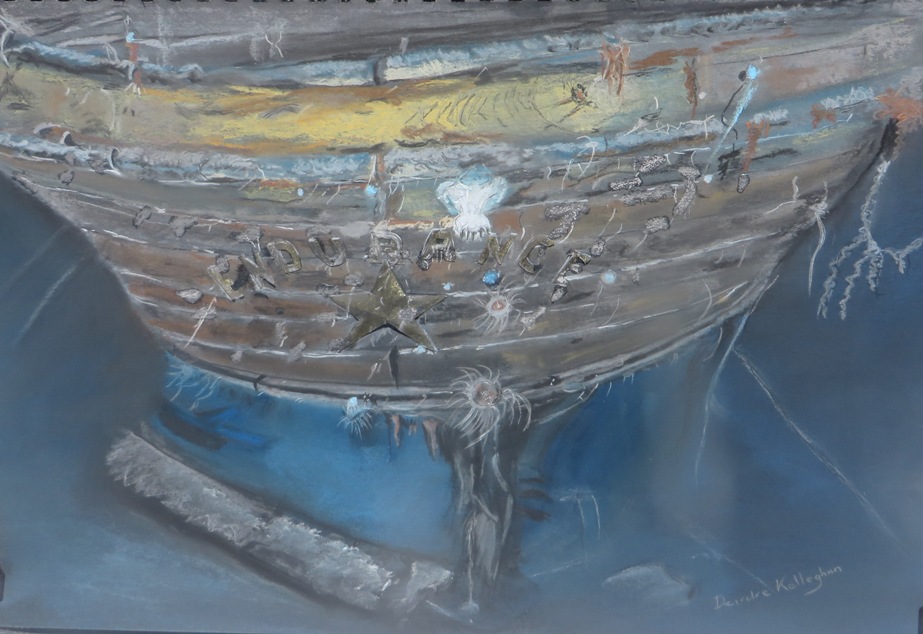 Space exploration and Earth exploration have always interested me. Arctic and Antarctic explorers of the past took on the equivalent of space explorers today. Back in 2015, I remember doing some space-related drawing workshops at Athy library Co Kildare. In a break between sessions, I went into the Shackelton Museum, which shared the same building. On display were some of the explorer’s outer garments, that the crew wore in the Antarctic. It was shocking to think how they survived in such outfits. So thin and unprotective of the extreme conditions they faced. No puffy jackets or high-tech wear available back then.

Earnest Shackelton was born in Athy, Ireland, in 1874. He was part of several polar exploration missions. One of them was The Imperial Trans-Antarctic Expedition of 1914 -1917. The Endurance ship was his charge, as were its crew of 28 men. When the ship became stuck in the pack ice, the crew, being cautious, camped on the surrounding ice. Eventually, the Endurance was crushed and sank to the bottom of the Weddell sea. The epic story of their survival and rescue is the subject of many books. A summary is available here.

One hundred and seven years later, a remote submersible found the ship. My drawing above came directly via inspiration from the mission, the men and the discovery.

Endurance location was discovered by the scientists and researchers on SA Agulhas 11 on March 5th 2022, at a depth of 3008 metres or 9868 feet. The team used a submersible (SAAB Sabertooth Hybrid Vehicle )to find their target. Endurance was in remarkable condition at such depth. What stuck out for me was the number of creatures happily eking out a living on the old wooden hull. Every so often I wonder what might live or not below the ice of of Europa, Ganymede, Callisto and Enceladus.

ESA has their JUICE spacecraft heading to Jupiter’s ocean moons in 2023. NASA offers the Europa Clipper due to launch to Europa on flybys in 2024. The Huygens probe (carried by Cassini) is our only robot to land on another moon. What an achievement; someday, we would hope to see a follow-up mission to investigate the alien oceans of Titan. Submersibles are already in development for the task of exploring oceans inside moons.

Human missions to the poles back in the 1800s are without parallel. Spacesuits for survival today are the top-of-the-range life support garments. The men that went to the south and north poles and lived to tell the tale had tremendous guts. They had little or no communication for months/years with the rest of the planet. The men suffered greatly with the conditions they endured. They just had to explore. It’s part of the human condition to seek and gather new knowledge. To push the boundaries of resilience and experience. We must also acknowledge the crew of the Space Station who are likewise brave in their efforts of exploration. They are obviously surviving in space and consequently adding to the knowledge bank every single day.

Space explorers of the future, even with their high-tech ships and ultra-cool spacesuits, will be courageous. They will bring us forward within new frontiers. These pioneers’ adventures will open our eyes to the fundamental essences of our existence. Even remote telescopes like Webb and exploration rovers like Curiosity will open new visions to us all. Whenever it is possible humans will follow after robotic explorers. They are in effect our tools of elimination, seeking and finding on our behalf.

“Our flight must not be only to the stars but into the nature of our own beings. Because it is not merely where we go, to Alpha Centuri or Betelgeuse, but what we are as we make our pilgrimage there. Our natures will be going, too.”
Philp K. Dick

Exploration of our solar system and beyond is a process of elimination. Is there any life of any kind elsewhere? Or are we and the creatures we share Earth with it? Until we can answer that question, we must assume that our planet is unique. Therefore we are even more obliged to look after it in every way possible. I often make that point to children at my workshops because it is logical and practical.

Craters on the Moon and Mars

There is a crater named Endurance on Mars. This naming is an honour to this ship and its remarkable crew. On the south pole of our moon, there is a large crater named Shackelton. There are elaborate plans to create a habitat for humans while exploring that hidden lunar surface area. See link below