The Cabinet of Physics, a fabulous collection of antique scientific devices I essentially stumbled upon (as I related yesterday) in Florence, has a long history.  It may also have a bright future.

“Cabinet” is an old word, dating from the sixteenth century, for a room holding an array of remarkable objects, such as specimens in a natural history collection.

In the 19th century, as Italy grew toward becoming an industrial nation, its need for technically-trained workers also grew.  In Tuscany, the region of Italy surrounding the city of Florence, this challenge was met by the Istituto Tecnico Toscano. Mathematician Fillippo Corridi became its first Director in 1853. In his zeal to create an excellent technical school, he worked to provide the Institute with modern laboratories, with a library, and with a large array of mineral and biological specimens.

Corridi also began to collect equipment that could be used in teaching the physical sciences to young engineers and technicians.  That was the beginning of the Gabinetto di Fisica, the Cabinet of Physics. He recruited other educators to help with this project. To quote from the Foundation’s site:

“From the moment that classes began there (1857), thanks to Gilberto Govi, the first teacher of Technological Physics, and above all to the success of his evening lessons, the Gabinetto was continually enriched by new pieces of equipment necessary to the study of experimental physics These were  built in the Machine Workshop of the Istituto or acquired from the most renowned French, German and British makers who, at the time, were capable of producing the best scientific instruments on the market.” 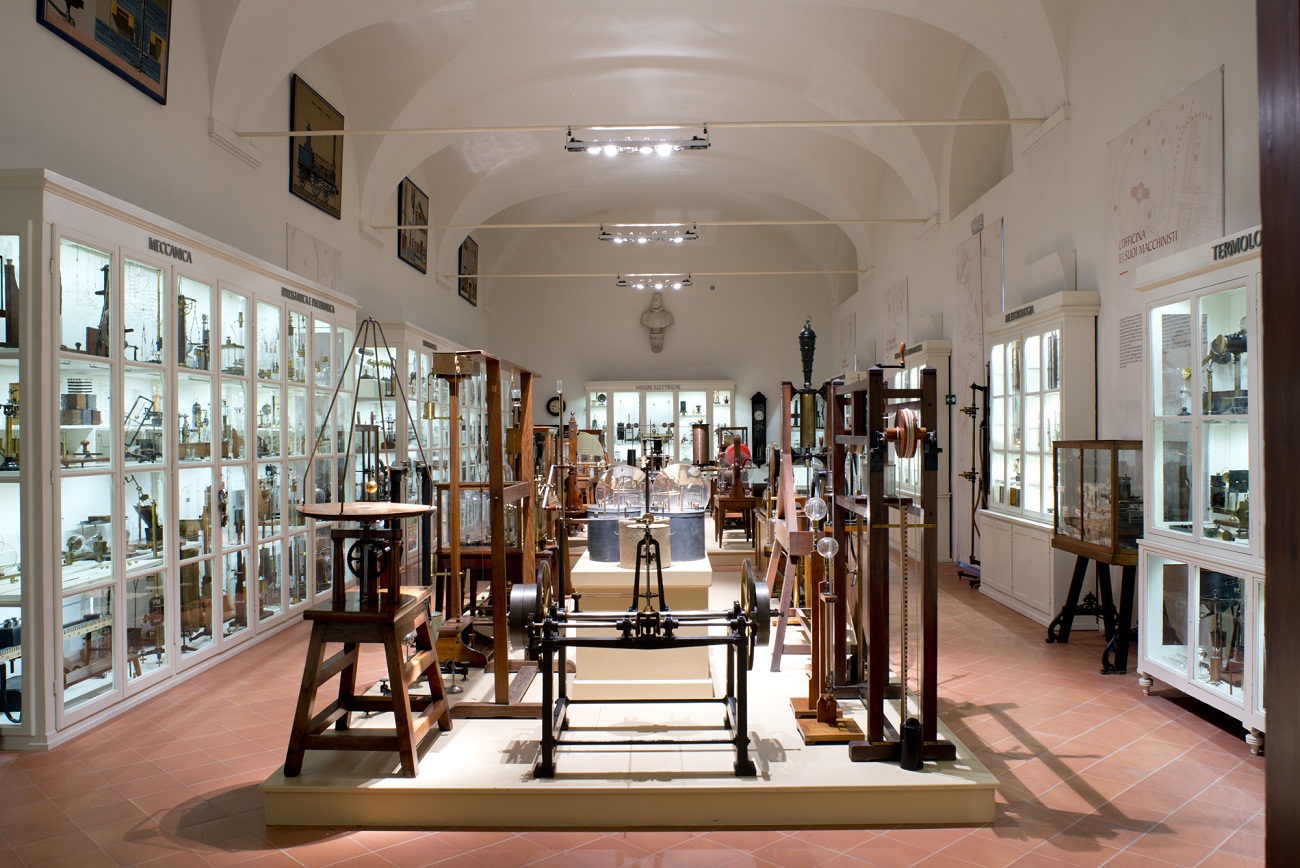 One of the rooms containing the Cabinet of Physics, a collection of antique scientific instruments at the Fondazione Scienza e Tecnica in Florence, Italy. Photo: Wikimedia user Sailko.

As time went on, subsequent leaders of the Institute continued to build up the Cabinet’s collection.

In his article “The Physics Cabinet of the Istituto Tecnico Toscano,” Paolo Brenni, a specialist in scientific instruments, recounts its history.*  “By 1910,” Dr. Brenni writes, “the cabinet numbered more than 2000 instruments and machines which covered all the fields of classical physics.”

Meanwhile, Italy was becoming a major industrial country, while engineers, technicians, and scientists trained in Tuscany went to work in the nation’s factories and laboratories.

As the Institute and its successor organizations changed, so did the style of education in physics.  Some of the equipment became obsolete; educational films replaced classroom demonstrations to some extent; physics became a less significant part of the curriculum.

“Most of the instruments accumulated between circa 1850 and circa 1915 were slowly abandoned to the dust of their cupboards and the tacit knowledge associated with them faded away. Fortunately, because of a series of lucky circumstances, the physics collection was neither destroyed nor dispersed and survived almost completely until the 1980s, when it was rediscovered and its cultural value was fully recognized. In the following years, thanks to long and patient work, the cabinet of physics was refurbished and all the instruments were restored, reordered, and catalogued.”

Today, the collection resides with the Fondazione Scienza e Tecnica, or Foundation for Science and Technics, in Florence.

In recent years, the Foundation has begun an interesting program.  Setting up a piece of apparatus, white-gloved curators conduct a demonstration in much the way 19th-century students would have experienced it. The role of the “students”  is filled by a video camera.  The result is a short video, usually a few minutes long, The demonstrations are wordless, but the action is explained in English captions.  To see these classic experiments in action can be a delight.

Now, not many of the instruments in the Cabinet of Physics are astronomical instruments. But it seems to me that since physics and astronomy are sister sciences, most readers of The Catholic Astronomer feel considerable fondness for physics as well.  I propose to link, from time to time, to FST’s videos of this remarkable collection.   Let’s enjoy seeing some principle of physics demonstrated, one at time. Or, if you prefer binge-watching—I hear binge-watching is all the rage these days—go right to the Foundation’s YouTube channel.

Below is a trailer that serves to introduce the Foundation’s video-making program.  It will benefit all manner of viewers: those with an interest in historical instruments; those who enjoy the brass-and-wood technological aesthetic so beloved by enthusiasts of steampunk; those who wonder how science was taught in an earlier century; those who take delight  in taking a few minutes to learn a little bit of physics, especially if a flash or a bang is involved.

I’m glad to have learned of the Fondazione, its Cabinet of Physics, and its collection of YouTube programs.  I’m even more glad to share them with you.

More Posts in this Series:
"From the Cabinet of Physics"

20  |  From the Cabinet of Physics: Using a Single-Prism Spectroscope

21  |  From the Cabinet of Physics: A Machine for Falling

23  |  How I Found Florence’s Marvelous Cabinet of Physics