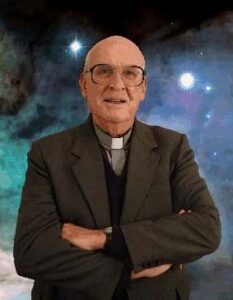 The New York Times (online edition) has run an obituary for him, which you can link to here; their recognition is a tribute to his stature as an astronomer and a Jesuit. I also wrote up a short piece about him for the L’Osservatore Romano, which they edited and ran in Italian; below you’ll find the full English text that I submitted to them.

What’s curious to me is that the Times led their article by talking about George’s work in Galileo and evolution whereas I didn’t even mention that in my article.

It makes sense, of course. To most readers of the Times, those topics were the things that had brought him into the public eye, more than twenty years ago. But to me they were so insignificant that I had completely forgotten about it when I wrote up my piece. And, as you may sense in the way they quote me on the topic, my response to how they put it was basically, “well, yeah, but…” Of course, no sound bite could do justice to his views on those topics. If you want to read in more detail what he had to say on them, search for “Coyne” our Faith and Science resource site.

My next task will be to prepare what I will say at his funeral, which will be held on Monday in Syracuse at LeMoyne College, where he taught after his retirement. Meanwhile, here’s what I had to say about him for our Vatican audience:

Fr. George V. Coyne SJ, director of the Vatican Observatory from 1978 to 2006, died on Tuesday, February 11 at Upstate University Hospital in Syracuse, N.Y where he was being treated for bladder cancer. He was 87 years old.

Fr. Coyne was named director of the Vatican Observatory at the age of 45 — notably he was one of the few appointments made during the brief papacy of John Paul I — after the unexpected death of his predecessor. He served until he was 73, the longest term of any Observatory director.

During his tenure as Observatory director, Fr Coyne oversaw the modernization of the Observatory’s role in the world of science. He essentially re-founded the Specola Vaticana. 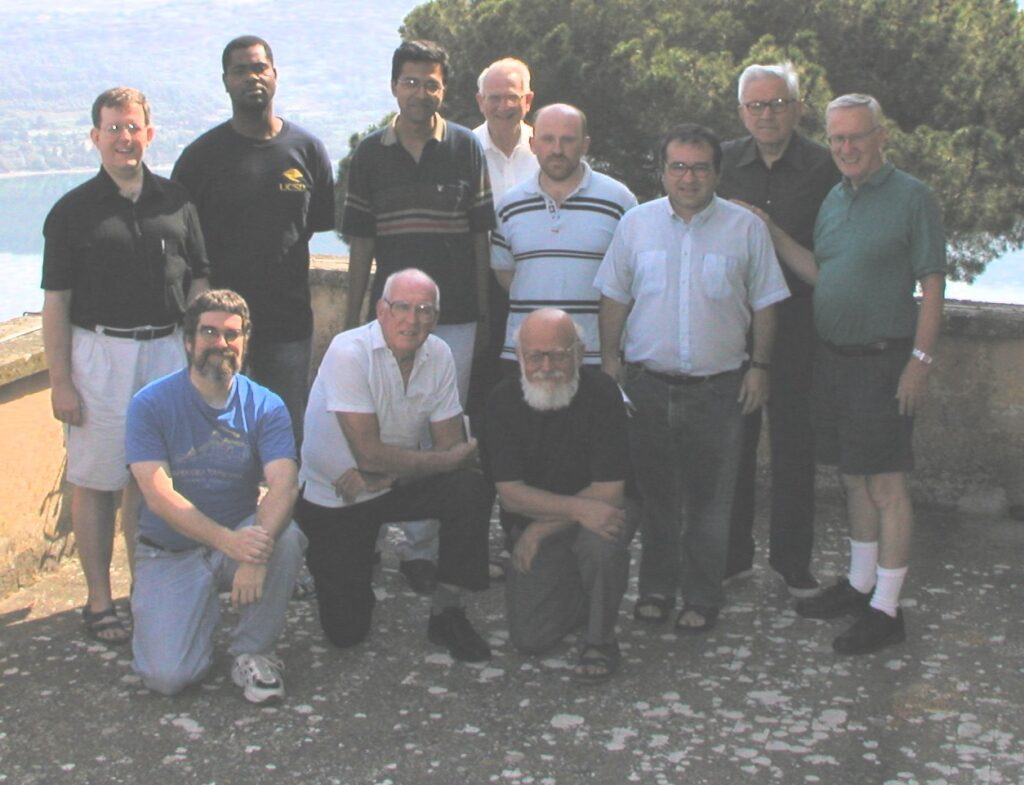 In 2003, George Coyne invited a number of young Jesuits to visit Castel Gandolfo and think about joining the Observatory. They all joined. (At that time, José and I were already at the Observatory, but George had recruited us, too.) Back: Paul Gabor, Jean Baptiste Kikwaya, Richard D’Souza, Andy Whitman, Gabriele Gionti, José Funes, Sabino Maffeo, Richard Murphy; front, Guy Consolmagno, George Coyne, Giuseppe Koch. (Andy, Sabino, Richard, and Giuseppe were also members of the community then!)

When the Observatory had moved out to Castel Gandolfo in 1935, a group of young Jesuit scientists from Germany and Belgium had arrived; by 1978 they were reaching retirement age. And in 1978, every astronomer at the Observatory was a Northern European or American. But George found young Jesuit astronomers in Africa, South America, and Asia — and Italy, adding essentially the first Italian astronomers on permanent staff since its Italian founder, Fr. Denza, died in the 1890s. He nurtured their priestly formation and arranged to pay for their astronomical studies.

He also devised the rank of “adjunct scholars”, astronomers from around the world who were affiliated with the observatory. Since these members, though Catholic, were not necessarily Jesuits, this meant that we could have a number of women scholars affiliated with the Specola.

George Coyne with his friend from his Georgetown days, Vera Rubin, at the 1986 Vatican Observatory Summer School where she taught.

One of the most important developments that occurred while he was director was the establishment of the biennial Vatican Observatory Summer Schools. Every two years, astronomy graduate students from around the world take classes for four weeks at our headquarters outside Rome. The professors at these schools are among some of the most notable astronomers of their era (including Didier Queloz, winner of the 2019 Nobel Prize in Physics, and Prof. Vera Rubin, the discoverer of “dark matter”). Likewise the alumni, now over 400 in number, are also now a roster of important astronomers, such as Heino Falcke, who recently helped devise the first image of a black hole.

The schools are tuition free, and the majority of students come from developing nations. From its beginning roughly half its students have been women — even though the student selection is strictly gender-blind.

These schools have had a remarkable impact on the lives of the students, and in promoting astronomy in the developing world. And they have put the Vatican Observatory on the map in the world of astronomy. But best of all from our point of view, they continue to fill the Specola with the enthusiasm and energy of youth.

Also notably under Fr. Coyne’s leadership, in the 1980s the Vatican Observatory Research Group was established at the University of Arizona. In collaboration with the University he made possible the construction of the Vatican Advanced Technology Telescope, with the world’s first spin-cast mirror, on Mt. Graham in southern Arizona. 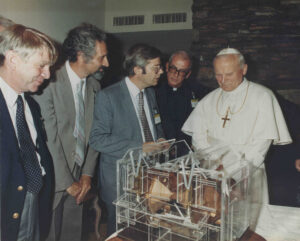 In 1987 Pope John Paul II visited Arizona, and at that time the members of the U or Arizona astronomy department described their plans for an observatory including a telescope for the Vatican. Note George to the Pope’s right.

Under Fr. Coyne, the work of the observatory extended beyond science and into the rich field of the dialogue between science and theology. In close collaboration with Pope St. John Paul II, in the 1990s he promoted a series of conferences on “God’s Action in the Universe” at the Observatory’s headquarters in Castel Gandolfo, Italy, in collaboration with the Center for Theology and the Natural Sciences of Berkeley, California. A series of proceedings were published by the University of Notre Dame Press.

A letter from St. John Paul to George Coyne on the occasion of the 300th anniversary of Newton’s Principia was one of the most detailed statements of Catholic theology on the relation between science and faith. And Fr. Coyne also wrote a number of articles on this topic himself, as well as a book with the Italian priest/astronomer Alessandro Omizzolo, Wayfarers in the Cosmos: The Human Quest for Meaning.

George Coyne was also notable for publicly engaging with a number of prominent and aggressive opponents of the Church who wished to use science as a tool against religion. These included such notables as the Oxford biologist Richard Dawkins and the American entertainer Bill Maher. Fr. Coyne’s openness and disarming friendliness was a remarkably effective counter to their assumptions.

But of course it is as an observatory director that we at the Specola remember him the most. His first words to me when I arrived at the Observatory back in 1993 were simple: “do good science.” He understood that without solid science at our foundation, all the other work of the Observatory would be in vain. And he created a space where we were all free to pursue that science. He made us welcome; he encouraged us to engage with our colleagues at scientific congresses and visits to their observatories; and he made our collaborators and visitors welcome at the Specola. He even arranged a free apartment for scholars who would come to work with us.

The friendly atmosphere of the Specola Vaticana under Fr. Coyne attracted young astronomers from around the world. As an example of his working style, more than once I recall chatting with him in his office when the telephone would ring; he would ignore it. “You’re with me now,” he explained. “Why should I let someone else interrupt us?”

Fr. Coyne was born on January 19, 1933 in Baltimore, Maryland, the third of eight children. He attended Catholic elementary schools and received a full scholarship to the Jesuit-run Loyola High School in Blakefield, Maryland.

In a 2014 interview with Scott Doublas Jacobsen for the Canadian online journal In-Sight, Coyne recalled how he became a Jesuit and an astronomer: “A religious nun who taught me in the 7th and 8th years of elementary school insisted that I take the entrance exam to [the Jesuit high school] and she prepared me to do that by instructing me every Saturday afternoon for two months. No Saturday afternoon baseball or basketball for me! She happened to have the entrance exams for the past twenty years and they were the basis for my instruction. Needless to say, since there are only so many new questions one can ask, my drill master taught me to answer questions even before I was asked. Through dint of memory – and not intelligence – I won a full scholarship… 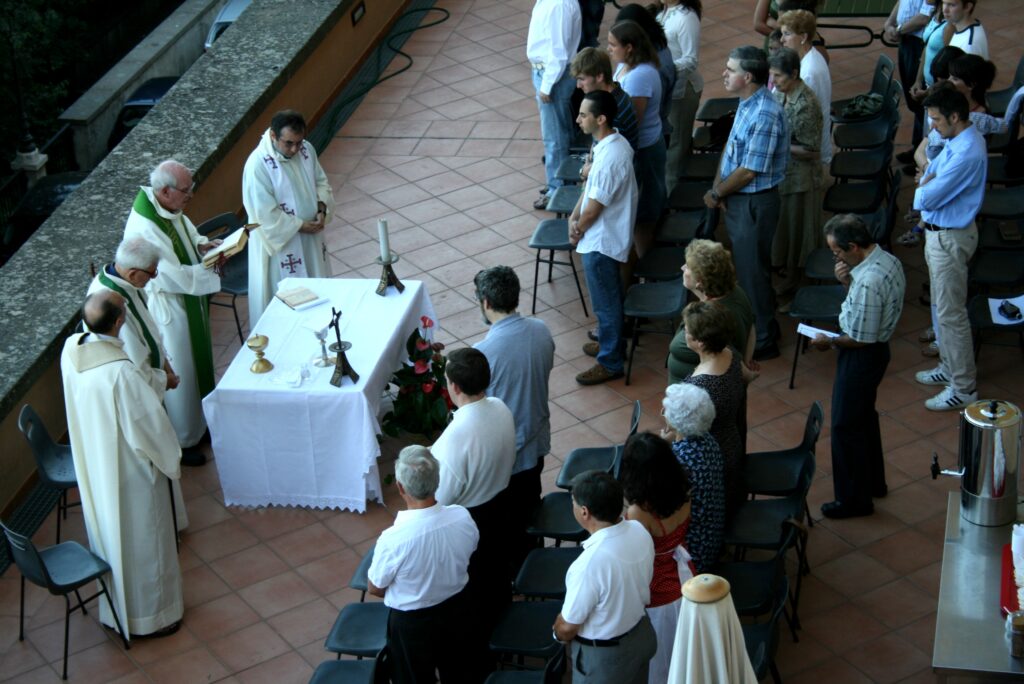 “I was taught by many young Jesuits at [Loyola High School] and grew to admire their lives, especially two aspects: their total dedication to working for others and their obvious happiness at living together in a religious community…

“At graduation from high school, I entered the Jesuits. During my first year of studies in Latin and Greek literature, after two years of novitiate, I had the good fortune of being instructed by a Jesuit priest who, in addition to having a PhD in the classical languages, also had a MS in mathematics and an educated interest in astronomy. He noted my interest in astronomy and encouraged me to nurture that interest. His dedicated and passionate tutoring determined all of my future professional life.”

George earned a B.S. in Mathematics and licentiate in philosophy from Fordham University in 1958, a Ph.D. in astronomy in 1962 from Georgetown University, and finally the licentiate in sacred theology from Woodstock College. He was ordained in 1965.

Coyne’s main research interest was the study via polarimetry of a number of astronomical objects. These included the surfaces the Moon and Mercury; the interstellar medium; stars with extended atmospheres; and Seyfert galaxies, which are a group of spiral galaxies with very small and unusually bright star-like centers. His final papers were on the polarization produced in cataclysmic variables, interacting binary star systems that give off sudden bursts of intense energy.

[added note: I was a student at the LPL at that time and I knew George from listening to his homilies when he would preach at Sts. Peter and Paul Church, where he lived at the time. The Lunar Lab was a wildly dysfunctional place in those days, with lots of infighting among the faculty, and I was living in a house with students of the various feuding professors. We would keep each other posted on what was going on, and my contribution was to take the temperature of the fighting based on what George had preached on that morning! In fact, though he was junior to all the principles, they agreed to have him become the director of the Catalina Observatory because he was the only one that they all trusted.]

53  |  Reflections on the passing of Fr. George Coyne